THROUGH THE LOOKING GLASS - JAMES JASPERS AND THE FURY: Page 2 of 4

It should have been the end. Captain Britain was resurrected by Merlyn and Roma, who were dissatisfied, as this staged conflict with Jaspers had merely been a test run, so to speak. A test Captain Britain had failed. On Earth 616, another version of Jaspers was waiting in the wings, a more powerful Jaspers in this – a more important universe. The consequences of this Jaspers running wild could spell the end of the multiverse. Nevertheless, Merlyn was certain that his painstakingly carefully arranged scheme would succeed, that he had planned for every eventuality, had control of every pawn. 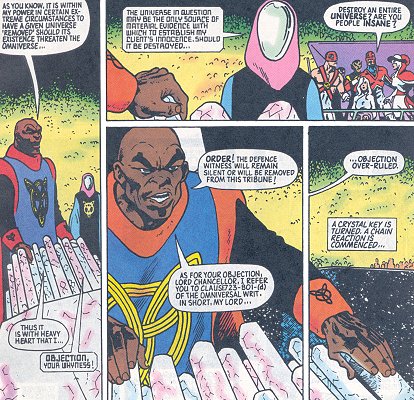 After his rebirth, Captain Britain was sent back to his own Earth. Having barely managed to take up the reins of his life again, Captain Britain was summoned against his will to the Dimensional Development Court to stand witness at the trial of Saturnyne, for what was perceived as her failure on the Crooked World. Her successor and judge, Mandragon, chose to handle the Jaspers-caused reality cancer by destroying the entire universe.

It should have been the end, but it wasn’t. 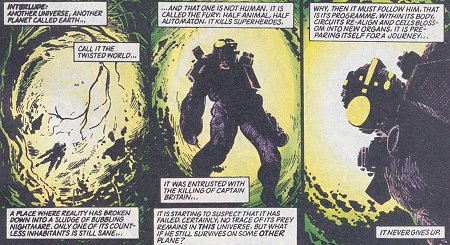 Standing at Captain UK’s grave, its Intuition told the Fury that, despite the evidence of its senses, Captain Britain was not dead. So, before its universe was destroyed, it adapted and crossed dimensions in search of its quarry. It arrived in London, badly damaged, and mended itself by absorbing several animals and vagrants, one of whom it managed to infect rather than kill. [The Daredevils #1-7, Captain Britain (2nd series) #4]
Chapter 4 – Waiting for the End of the World
“But what happens when you come to the beginning again?” Alice ventured to ask.
“Suppose we change the subject,” the March Hare interrupted.
(Alice’s Adventures in Wonderland) 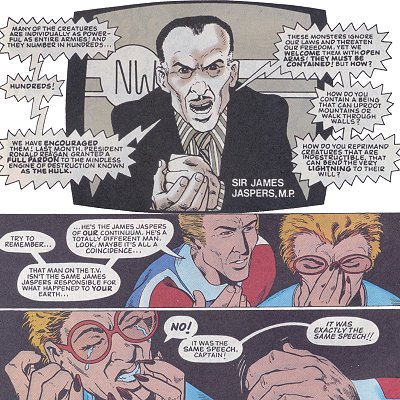 Having returned from the Dimensional Development Court (with a fugitive Saturnyne and the Special Executive – a group of interdimensional mercenaries – in tow) Captain Britain was visited by a panicked woman named Linda McQuillan aka Captain UK, who informed him of the political situation and that James Jaspers was rallying against heroes – just the way it had started in her world.

This world’s Jaspers was indeed doing that and more. While playing the public’s opinion, he also made a deal with the Vixen, the mob leader, who had recently secretly taken over S.T.R.I.K.E (the British equivalent to S.H.I.E.L.D.) to get ready to round up all the superhumans. 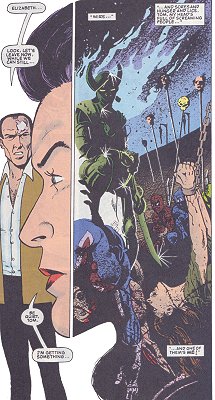 On Otherworld, Merlyn and his daughter, Roma, prepared themselves for a unique game of chess, one that would decide over the fate of the multiverse as they knew it. All the involved player had been brought into place, each of them represented with a small figurine on their board. Roma didn't want to take part in the game, but Merlyn odered her to do so anyway.

Meanwhile, back on Earth, while the two Captains were still discussing the situation, the two precognitives, Betsy Braddock and Cobweb of the Special Executive, were receiving visions of impending doom. While Cobweb went into spasms over the sudden appearance of a dark future she hadn’t foreseen, Betsy received a clearer vision of super-powered people being tortured and killed in concentration camps. To Betsy shock, she herself was among these people as well. For the frustrated Linda McQuillan, it was all too much to bear and, not wanting to see everyone die a second time, she left Braddock Manor, only to run right into the arms of the Fury, who had arrived in this reality.

Remembering Captain UK as its secondary goal – the one superhuman from Earth 238 that had gotten away - the Fury immediately fired a lethal blast at her. On Otherworld, a horrified Merlyn saw this threat, which he hadn’t counted on, appear on his chessboard as well.

He managed to protect Captain UK from the Fury’s blast by directly intervening – protecting the chess pawn that represented her in his game - though this action scarred him, as with this new arrival his carefully arranged game was spinning out of control, as now anything could happen. 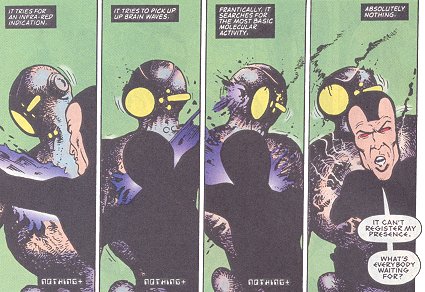 A frightened Captain Britain and the Special Executive arrived to help. The Fury killed several members of the group, though, and would have likely slaughtered them all, had not the reluctant Executive member, Zeitgeist, joined the fray. Being completely insubstantial if he wished, he distracted the creature for long enough so that Captain Britain and Fascination could smash it in into the ground, effectively burying it in a cave beneath Braddock Manor.

The Special Executive left to mourn their losses, while Captain Britain, Saturnyne and the other humans left for London, hoping to do something about Jaspers. [The Daredevils # 8-11]