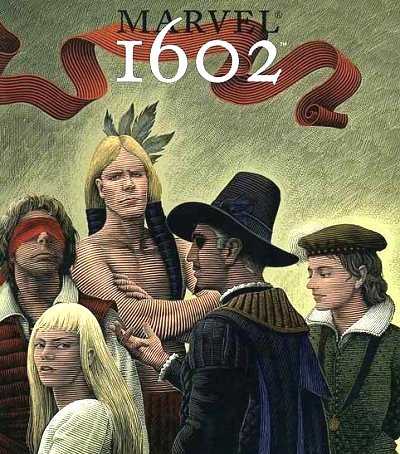 1602 was a very strange story for Marvel. The overall concept behind the series, “What would happen if Marvel superheroes existed in the 17th century?” was a very unusual idea and seemed more akin to an obscure issue of What If? However when you consider who the writer was, Neil Gaiman, it wasn’t that surprising.

Neil Gaiman was known as the award winning writer behind the DC Comics series Sandman when Marvel took him to the task. That series repeatedly dabbled in mythology and the past, often detailing the main protagonist in such settings as Ancient Greece and Rome, the French Revolution, and Victorian England. A fan of his previous work might not have been surprised that Gaiman chose to write a story about Marvel Superheroes set in a very distinct historical period, he on the other hand was.

At the time he wrote 1602, Gaiman hadn’t written a comic book in years and although he had agreed to write a story for Marvel he was unsure what exactly he wanted to write about. It was a trip to Venice that would give him his inspiration. While in this scenic and historical city, Gaiman was struck by how the "past seemed very close at hand". He decided to choose the time of 1602 because "it was a nice place to set the story. It gave me America and it gave me a lot of things that I wanted in terms of the way the world was changing. It also gave me the sense of wonder and magic." It could be argued that’s why he choose the cast he did. All of Gaiman’s characters, with the exception of actual historical figures, were 1960’s Marvel characters. In the 1960’s there was a greater sense of wonder and originality regarding comic books as compared to the current marketplace at the time.

1602 wasn’t as big a success for Gaiman as Sandman, but it was successful enough to warrant two subsequent mini-series, however neither series was actually written by Gaiman.

Moving on to the articles themselves, in “Chronology” we recount the main events regarding this fascinating world, while in the “Characters” section we go more in-depth into the individuals of this world, contrasting them with their Marvel and historical counterparts.

*Quotes taken from the "Afterword" found in Marvel: 1602