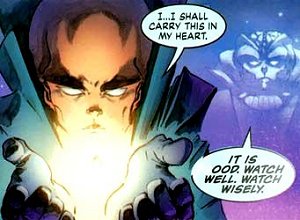 ACT EIGHT: To Be, Or Not To Be
With Earth 616’s timeline corrected the 1602 reality should have faded out of existence. Instead it was given to Uatu as a pocket dimension as both a punishment and a reward for his meddling.
[1602 #8]

ACT NINE: Brave New World
The heroes dispersed just as quickly as they had come together. Clea returned to the Dark Dimension, Thor to Asgard and Enrique departed to parts unknown as did Javier’s Witchbreed. The Roanoke colony decided to keep its independence but it was in definite need of protection. Luckily for the colony, the protection they needed was right under their noses.
The first act of the new independent government of Roanoke was to outlaw the Witchbreed after an out-of-control Hulk had rampaged through their town. The Hulk was actually David Banner who had been exposed to temporal energy just before reality had been corrected. Norman Osbourne was responsible for getting this law enforced. He also had the Indians outlawed as he believed that they were in possession of the Singularity that created the Witchbreed. Norman even had the Indians’ village burned down.
As if the mounting hostilities between the colonists and the Indians weren’t enough, the arrival of the British under the leadership of Captain Ross and the Spaniard, 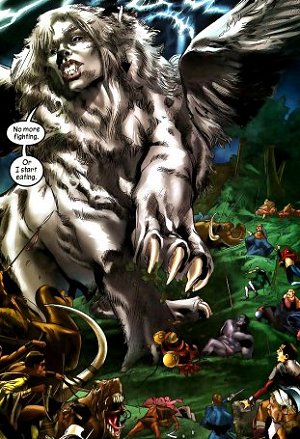 Lord Iron exacerbated things. Lord Iron and Captain Ross had been dispatched by King James to apprehend David Banner, and upon arriving in Roanoke Ross was disgusted to hear that they had renounced England. He took Governor Dare prisoner and planned to execute him for treason. The colonists needed heroes and they got them from some very unlikely sources.

Peter Parquagh had been bitten by a spider that was irradiated by temporal energy. The Indian Chief Marioac inspired the young boy and he took on the identity of the Spider. The Spider and Virginia managed to stem the tide of bad blood between the Indian tribe, the Hulk and the colonists, and the English and Lord Iron. The colonists of Roanoke and the Indian Tribe formed a council that consisted of members of both groups to make decisions from that point on. Banner surrendered to the English and the colony remained independent.
[1602 #8 and 1602: New World #1-5]

ACT TEN: As Boundless as the Sea
The Fantastick Four also went on to have more adventures. They returned to England where Benjamin became an actor in his old friend, William Shakespeare's theater company. It was while Benjamin was working with Shakespeare that the four came into conflict with their old enemy, Count Otto Von Doom. Doom had Shakespeare kidnapped as he wanted the bard to chronicle his trip to the end of the world.
Count Otto Von Doom had heard tales of a technologically advanced nation that lived at the edge of the World, run by a group of adventurers called the Four that are Frightful. Doom believed that this city held the secrets to restoring his damaged face. The Fantastick Four followed Doom and despite his head start, they managed to catch up with him as both groups reached the city of Bensaylum. 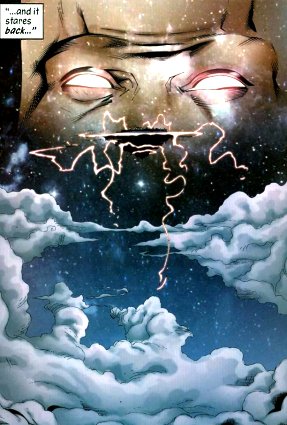 Upon their arrival they were greeted by Emperor Numenor and his cousin Rita. Instantly, Numenor was attracted to Susan and Rita to John. Otto Von Doom offered to get rid of Richard and Captain Grimm, leaving Susan and John for Numenor and Rita. Despite this declaration, Von Doom was plotting to overthrow Numenor and claim his magical trident.
Rita overheard the plans of her cousin and Doom and warned the Storms, who then confronted Numenor. Meanwhile, the Wizard grabbed hold of Numenor’s trident and raised the city of Bensaylum into the air. Doom and Numenor both tried to claim the trident. During the melee, Numenor was stabbed by the trident. As he lay dying, Numenor explained that the city was foretold to vanish if royal blood was ever spilled by the trident. The floating city started to break apart and eventually fell into the ocean. During the chaos, all the members of the Four that are Frightful appeared to die save Madame Medusa. The Four Fantastick managed to escape with Shakespeare just before the city was destroyed leaving Otto Von Doom, Madame Medusa, Rita and the citizens of Bensaylum to a fate unknown.
[Marvel 1602: Fantastick Four #1-5]

ACT ELEVEN: Long live the King?
Four months after his capture, David Banner was set to be burned to death. Just before he died, King James asked Banner if he was going to beg for mercy. Banner claimed he would leave the begging to the king.
[1602: New World #5 Epilogue].