ACT FOUR: Murder most foul
Fury’s attempts to gain information out of the mysterious assassin had failed, but he knew someone who could help him. Fury met with Javier and his Witchbreed. They had recently liberated the angelic Witchbreed, Werner, from the hands of the Grand Inquisitor and added him to their ranks. After a brief demonstration of his student’s abilities, Javier agreed to help Fury find out who sent this assassin. While he failed to determine who had sent the assassin, he found out that the assassin was one of a group of three. Two more agents had been dispatched to murder Virginia Dare and Queen Elizabeth. 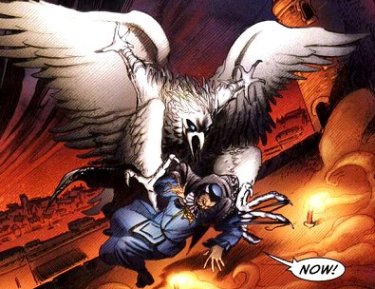 Rojhaz and Virginia Dare were greeted by Peter Parquagh upon their arrival in London. Peter took them both for Virginia’s audience with Queen Elizabeth. During the meeting an assassin burst through the skylight and attempted to capture Virginia. The assassin was quickly defeated by Rojhaz but the stress of the incident caused Virginia to transform into a Gryphon. Rojhaz, with the help of Stephen Strange, managed to subdue Virginia and she reverted back to her human form.
In Scotland, Petros, secret son of the Grand Inquisitor, met with King James in the aims of entering into an alliance. Enrique wanted King James to deliver Javier and his Witchbreed to him when James eventually became King of England. King James claimed that the sooner Queen Elizabeth died the “friendlier” he would be to the Inquisitor. 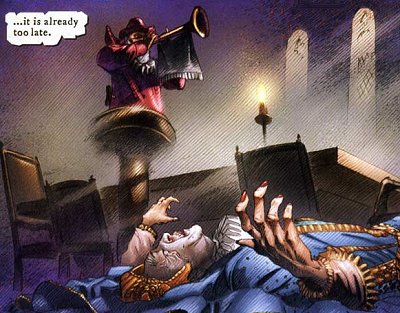 James didn’t have to wait long. The Queen was soon murdered by the third, undiscovered assassin. It was revealed that the assassin was the Latverian emissary. It was now clear that it was Count Otto Von Doom who was behind the murder attempts. It was also revealed that Natasha was in league with Doom. He had coveted the Templar treasure too and he co-opted Fury’s agent Natasha to acquire it for him. Just as Murdoch and Natasha were about to rendezvous with Donal of the Templars, Natasha revealed her true colors and pushed him off a bridge. Murdoch managed to survive, but by the time he reached Donal both men were surrounded by Natasha and the Latverian Army.
[1602 #2-4]

ACT FIVE: Come, Lets Away To Prison.
Virginia Dare had been comatose ever since the incident at the palace. When she awoke she found a dramatically different world.
King James was now not only the king of Scotland but of England as well, now that Elizabeth was dead. His first act as king was to dispatch Fury to capture Javier’s Witchbreed for himself, going back on his implied deal with Enrique. Fury sent Parquagh to Javier first and asked that Javier and his students surrender to him when he arrived. Despite the objections of his students, Javier decided to trust Fury and when Fury and his men arrived, Javier and his students surrendered without incident.
Back at Strange’s home, Virginia recounted to Doctor Strange Rojhaz’s initial meeting with the colonists and how she gained her powers. After hearing Virginia speak of how the colonists suffered with strange weather and creatures prior to the rest of the world, Strange realized that whatever was affecting the planet had originated from Roanoke. Strange also discovered that Matthew had failed to secure the Templar treasure and it was now in the hands of Von Doom. Strange managed to send his astral form to the old Templar, Donal, in Doom’s dungeon. Donal informed him that Doom had captured the treasure, but what he believed to be the treasure was actually a decoy. While he was “at” the castle Strange also sensed what he thought to be the believed dead Fantastick Four.
Meanwhile, Javier and his Witchbreed were imprisoned in the Tower of London. Strange went to meet them and Fury and they decided they needed to storm Latveria for the Templar treasure. Javier’s Witchbreed with the aid of Fury and his second-in-command Dougan, easily broke out of their prison. They escaped London in a flying ship, using Jean Grey’s telekinesis to levitate the vessel and Scotius Summerisle’s optic powers for propulsion. From a safe distance, Peter Parquagh and Stephen Strange watched the fleeing heroes. Suddenly, Strange felt his mind being pulled away and collapsed.
[1602 #4-5]

ACT SIX: Off With His Head! 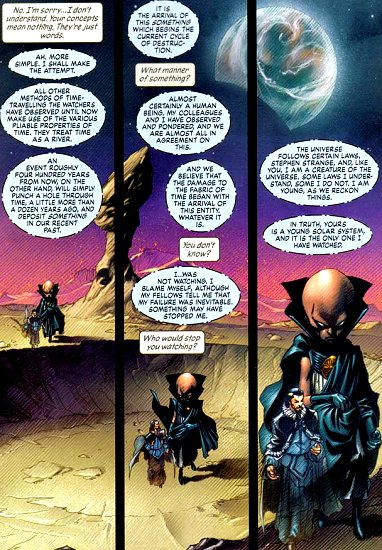 Stephen Strange’s mind had been summoned to the Moon by the Watcher, Uatu. Uatu explained to Strange just how dire things were and that it was he who was responsible for Strange’s visions as he was trying to direct his actions. Uatu explained that the 1602 reality was dying and when it did it was going to take out every other reality with it. A time traveler had damaged the time stream and the impending catastrophe could only be stopped by sending that time traveler back to his proper time period. Despite telling all this to Strange the Watcher forbade Strange from acting on any of this information while he was living.
Meanwhile, Fury and the Witchbreed had reached Latveria. During the ensuing battle the Fantastick Four managed to escape. Otto Von Doom attempted to use the decoy “treasure” to destroy the heroes, but was defeated and permanently scarred by the Norse god Thor. The real Templar treasure was actually Donal’s walking stick as it allowed the owner to trade places with the Thunder God. After defeating Doom, Fury, Javier’s Witchbreed, the Fantastick Four and Donal decided to set sail for Roanoke to find the reason behind the natural disasters. Matthew was also freed, but decided not to go with the heroes and make his own way home. 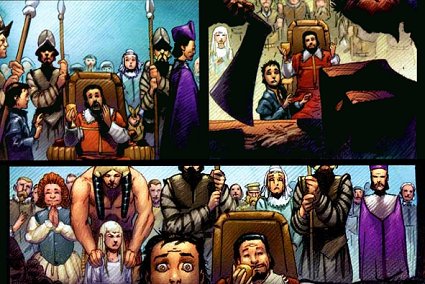 Back in England, Strange was to be executed by King James for practicing magic. Despite her pleas, Strange made his wife Clea promise not to interfere with his execution. After he was put to death, Strange was free of his promise to the Watcher. He told Clea everything and she departed for the New World with Rojhaz and Virginia Dare, fully aware that Rojhaz was the time traveler. David Banner and Peter Parquagh were also heading to the New World under the orders of King James to apprehend Fury so he could be brought back to England to be executed.
Somewhere in the Atlantic Ocean, Enrique and the Brotherhood had just turned their backs on the church. It had been discovered that Enrique had had dealings with King James and that he was a Witchbreed, so the Inquisition attempted to kill him and his children. The Inquisition proved no match for Enrique and his children and they quickly escaped. They planned to meet up with the rest of the Brotherhood in the North but their ship couldn’t break free from a south-westerly tide and they were forced to head towards Roanoke. All the major players were now descending on the New World.
[1602 #6-7] 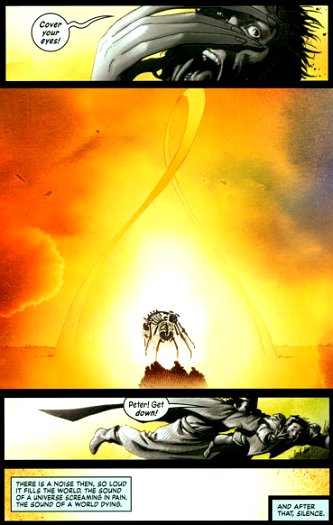 When the heroes arrived in Roanoke, Fury met with the governor, Anansias Dare. Although Dare welcomed them, Fury believed that openly welcoming the Witchbreed could cause massive problems for the colonists later so Fury instead “captured” Roanoke and declared it independent from England. Clea, Rojhaz, and Virginia arrived shortly after the other heroes and Clea quickly went to meet with them and explain the situation. Virginia then led the heroes to the temporal rift. With the sudden arrival of Enrique the heroes could now manipulate the rift and all that remained was to convince Rojhaz to go “home.”
With the help of Virginia, Fury managed to track down Rojhaz. Rojhaz refused to go home, but Fury managed to trick him and knock him unconscious. As Fury was carrying Rojhaz towards the rift, he was spotted by Banner who attempted to shoot him with a crossbow. However, Virginia was able to stop Banner. Fury reached the rift with Rojhaz and just before reality ended they entered, restoring Earth 616.
[1602 #8]
Note: It was mentioned in 1602# 8 that on Earth 616 the colonists of Roanoke starved in their first winter although a few were saved along with Virginia by the Native Americans. The Virginia of Earth 616 was also shown to be a superhuman making it clear that her powers weren’t related to the temporal rift. This version of events regarding Roanoke is in direct conflict with Marvel Comics Presents #63-64. It is highly likely that Neil Gaiman was unaware of the original story and this is a continuity error rather than a correction of the previous story.