MORLOCK TUNNELS aka THE ALLEY 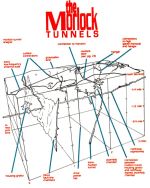 Deep beneath Manhattan there are miles and miles of abandoned subway tunnels.  Even deeper down there is an old bomb shelter that was built during the Cold War.  The exact extent of the tunnels is unknown and there are parts of them that are uncharted.  It is known that they stretch as far north of Manhattan as the Xavier estate in Westchester County approximately 52 miles away and into New Jersey, 75 miles south.  In addition to the network of tunnels and passages, there is a functional railway system that facilitates travel from one zone to another.  Deeper down there are underground rivers which are inhabited by superhuman strong, mutated critters such as alligators that occasionally make their way into the upper sewer system and inhabited tunnels.  The Alley connects to many of these deeper areas including Monster Metropolis, an underground haven beneath New York City for all manners of mutants, Moloids and monsters even more inhuman than the standard Morlock.

When the tunnels were abandoned, the access hatches and doorways were boarded up and forgotten.  Since then, the tunnels have become the home of society's outcasts, most notably the community of mutants calling themsleves the Morlocks.  Others like the the Dark Beast, the Abomination and the next generation of Morlocks called Gene Nation have sought refuge in the tunnels.  These denizens of the dark have restored many of the accessways and power systems left behind.  In addition, there are hidden labs created by the Dark Beast since his arrival in this reality.

As there is a connecting passage to the Xavier estate, the X-Men have placed some surveillance and security systems in the tunnels over the years.  They keep the tunnels strictly off limits to students and use this passage only in emergencies or when called upon for aid by their tunnel-dwelling allies among the Morlocks.

(This is mostly a Morlocks overview. The entire Morlocks chronology can be found here in our Friends or Foes section.)

Over twenty years ago, the Dark Beast crossed over from the timeline known as Age of Apocalypse. He set up base in the secret tunnels below New York and created and altered many mutants, although he made certain that they didn’t remember being tampered with.   He has made claims that he created the Morlocks who came to dwell in the tunnels but it is unclear exactly how much influence he had in the creation of the Morlock community.

Among the Dark Beast's favored subjects was the mutant Callisto who found the empty complex and made it her home.  She gathered others like her and along with Caliban, Sunder and Masque, she turned it into a sanctuary for mutant outcasts.   They banded together, and called themselves “Morlocks“ after the underground people in H. G. Wells‘ story "The Time Machine". [X-Men Prime, Generation X # minus 1] Callisto, Masque, Sunder and Caliban were the Morlocks founders (at least that is what they believe). They used Caliban’s ability to track down other mutants many of whom underwent facial changes by Masque to transform them into ugly people. For the most part, the people that later arrived seem to be subjects of the Dark Beast's experimentation, though not all of them.  For example, Thornn and Feral have a clearly established family background. [Uncanny X-Men (1st series) #176, 170]

The X-Men first learned of the Morlocks‘ existence and The Alley when they investigated the disappearance of the Angel. Warren Worthington had been kidnapped by Callisto, who considered him the most beautiful man alive and wanted to force him into marriage. The X-Men were completely outnumbered and the only way to get out of the situation was a duel for leadership between Storm and Callisto. Although no powers were allowed and Ororo was weakened by Plague’s disease, she surprisingly won by stabbing Callisto through the heart.  Due to a Morlock healer Callisto did not die. Now in charge of the Morlocks, Storm ordered to cease all attacks on the surface world. [Uncanny X-Men (1st series) #169-171] Storm could not stay because of her duties with the X-Men and so the Morlocks violated her rules a few times.  In time the Morlocks came to respect the X-Men and Callisto personally made sure that no more surface people were attacked in accordance with Ororo's orders.

Having recognized that the Morlocks were based on his own genetic studies (which the AoA Dark Beast learned from the Sinister od his reality), Mr. Sinister ordered the Marauders to kill the entire underground society. Both X-Factor and the X-Men tried to rescue as many as they could but hundreds of Morlocks died. After the Marauders left and no more survivors could be located, Thor created a firestorm through the Morlock tunnels, that burned away all blood and dead bodies. [Mutant Massacre]

Only a short time later, those Morlocks that had been rescued by X-Factor decided to re-settle in the Alley. Once there, they discovered more survivors that had been hiding in the far recesses of the tunnels. Since Callisto was no longer with them (she was on Muir Island watching over some injured Morlocks), Masque named himself the new leader. [X-Factor (1st series) #15]

The Marauders tried to set up base in the tunnels, but they quickly were detected by the X-Men. During Inferno most of the Marauders were killed and with Sinister being incapacitated, the remaining members followed their own agendas afterwards.

Masque quickly established himself as a very militant leader and he assured the loyalty of his followers by further altering their faces and bodies beyond recognition. Later when Callisto returned from Muir Island, he ordered her kidnapping. After she refused to give him the secret access codes to Xavier’s mansion, Masque tortured her by transforming her into a beautiful supermodel, though stripping her of her keen senses.  Over time Callisto fell in love with the then-amnesiac Colossus and accepted her new life among humanity. [Uncanny X-Men (1st series) #254, 259-260]

How deep Masque’s changes went only became apparent a while after his death in battle against X-Force. [X-Force (1st series) #9] Without him to maintain the grotesque appearances of the Morlocks, their flesh began to deteriorate, causing the Morlocks to go insane and desperately needing a new leader. As one of the last reasonable people, the Healer used his powers on Callisto to restore her to her old self, although at the cost of his own life. She was taken to Xavier’s mansion, where she met Mikhail Rasputin. Meanwhile the X-Men investigated the situation in the Alley. There they witnessed dozens of Morlocks killing each other in their madness and only partially got the riot

under control before Callisto and Mikhail arrived. Rasputin, who had lost his shuttle crew on a dangerous mission, believed himself to be best suited to become the new Morlock leader as he was a "shepherd without his flock". Believing that the world had no place for monsters like the Morlocks, Callisto or himself, his first decision was to completely flood the tunnels to put all of them out of their misery. [Uncanny X-Men (1st series) #291-293]

Believed dead, it turned out later that the Morlocks had only been taken to an alternate dimension they called "The Hill" where time moved a lot faster. The descendants of the Morlocks grew up in very harsh surroundings and life was a constant battle. Led by Marrow, a group called Gene Nation, came back to New York and angrily they tried to punish humanity for making the Morlocks hide away in the sewers. The X-Men battled this new villain team and they returned to the “Hill“.  Storm later followed and made Mikhail return all of his charges to New York.  Shorlty after,  the surviving Morlocks were resettled in the Salima Oasis in Africa. [Uncanny X-Men (1st series) #325, Storm (1st series) #1-4]

Despite its inherent darkness and tragic history, the Alley was not a place without hope.  For many of the Morlocks, it was a sanctuary from a hateful world.  The Morlock society had its own laws, customs and traditions.   For example, the Morlocks held a celebration once a year called “The Ceremony of Light“. This special event was held on a certain day at a specific hour when the sun was in the proper position. Sunlight that streamed through select openings to the surface world were redirected through many accurately positioned mirrors to illuminate the Alley's beauty in a spot that Cable dubbed "The Cathedral".  The symbolic event was meant to provide hope that one day the Morlocks could return to the surface world without being hunted or feared.  After Mikhail flooded the Morlock Tunnels, Cable and Storm each performed the Cermony of Light over the next two years' time to commemorate the loss of the Morlocks.  [Cable (1st series) #15, Storm (1st series) #1]

Though the Morlocks have acted with aggression towards the upworlders throughout their history, a sect among them adopted a pacifist philosophy.  They were inspired by the prophesies of the Morlock called Qwerty who had precognitive visions of a brighter day that she recorded on the very walls of the Alley.  After her death, these Acolytes retreated to a peaceful inner sanctum within the tunnels that they called Lindisfarne.   The name comes from an English island that is also referred to as "The Holy Island" and is home to a monastery that was a source of Christian enlightment in medieval times.  The X-Men and several former Morlock allies discovered this peaceful yet

fanatical sect and their sanctuary while investigating one of Masque's mad schemes against the surface world... all of which had been foretold by Qwerty.  [Uncanny X-Men (1st series) #487-491]

The Morlock tunnels have also served as headquarters for the Brotherhood of Mutants I, since the Dark Beast still had his secret labs there. However this incarnation of the Brotherhood was short-lived and has since disbanded.

For quite some time nobody officially resided in the Alley, though some of the old Morlock survivors (Callisto, Caliban, Thornn and Marrow) have been spotted using the space from time to time.  In recent years,  Wolverine and Spiderman ran into another little group of Morlocks. [Wolverine (2nd series) #157]

After the events of M-Day stripped most of Earth's mutants of their powers, the Morlock population was thinned considerably.  Those with physical vestiges of their mutation remained and some like Callisto and Marrow helped to keep them safe.  Some of the more hideous Morlocks retreated deeper into the bowels of the tunnels and lived among the myriad monsters that came to live in Monster Metropolis where they were defended  by the Legion of Monsters. [Punisher (8th series) #12]

Recent events have seen the return of the X-Gene and the emergence of new mutants.  Where there are new mutants, there are those in need of a refuge and the Morlock Tunnels are once again occupied by misshapen mutant outcasts.  This latest gathering was targeted by the High Evolutionary and the Evolutionaries latest attempt to protect humanity by eliminating those with superhuman powers such as the Morlocks.  They were defended by the latest incarnation of the New Warriors. [New Warriors (5th series) #1-3]