FLIPSIDES OF THE SAME COIN (the dreams of Xavier and Magneto): Page 3 of 8

The most fascinating dichotomy between Xavier and Magnus is the fact that, at their core, they want the same thing: the safety of their people… mutants. Since their early lives, Xavier and Magnus knew that they were different - born with powers beyond those of the masses of humanity, an unknown X-factor sewn into their genetic makeup. Assuming that there were others like themselves, Xavier and Magnus knew that, once the rest of humanity learned of their existence, they would strike to defend their claim on the world, and eliminate mutants - genocide hardly being an unknown phenomenon in the world. The difference, however, was their tactics.

Upon receiving his doctorate in genetics, Xavier began a life of public discourse, giving lectures at conferences and becoming the world’s foremost expert on mutants and genetic mutation. It is almost as if Xavier wished to bring human/mutant coexistence into being by his own sheer force of will - even before the existence of mutants was moved from theory to reality. His goal, it seemed was to prepare humanity for the arrival of mutant-kind.

Meanwhile, Magnus - who had begun to call himself Magneto - had a different vision of the future. As he viewed the conflict between humans and mutants an unavoidable inevitability, he sought to spare his people the same fate his family had suffered in Auschwitz - though conquest. Only by the subjugation of the human race could the future of Homo sapiens superior be assured.

After years of preparing for their respective campaigns, the two former friends met on the site of Auschwitz, each trying one last time to convince the other of the righteousness of their cause. Needless to say, neither budged on their position. [X-Men #minus 1]

How did these men come to be?

The symbol of Auschwitz had deep symbolic meaning for both men. For Xavier, it was a piece of history which must never be repeated. For Magneto, it was something that he had lived through. 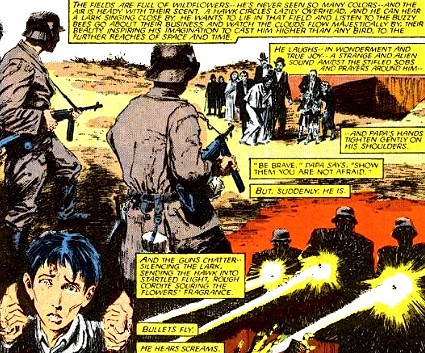 Born in the Polish city of Danzig, Magnus and his family were rounded up with other Jews by the Nazis after their city’s annexation in 1939. Rather than taken to a concentration camp, Magnus’ family was selected for immediate extermination and were taken to a mass grave, where they were shot. Magnus, however, did not die. Rather, his latent mutant power over all things metal activated and, instinctively, he caused the hurtling bullets to slow down or move out of his way. Believed dead with the rest of his family and the other Jews, Magnus was buried alive. Awakening in the darkness below, Magnus clawed his way to the surface, much to the astonishment of the still-present Nazi soldiers. So astonished were they that they sent him to Auschwitz, where he lived for several years. [New Mutants (1st series) #49, Classic X-Men #12, X-Men Unlimited (1st series) #2]

Over those years, Magnus kept his inner strength. Though not only witnessing but also suffering from the ultimate of man’s inhumanity to man could have broken Magnus - but it seems he was still not willing to give up on humanity. Indeed, Magnus managed to fall in love in the camp with a young woman named Magda and poured all of his hope and aspirations into her; an act which would eventually tear down the last of his humanity. In the waning days of the war, Magnus escaped from Auschwitz with Magda and married her. Over the next several years, they tried to build a life together in the Ukrainian town of Vinnitsa, where they were to raise their daughter, Anya. Though life was difficult in communist controlled land, it seemed that Magneto was positive about his future, and that of his family. That, however, was soon to change. After an employer attempted to cheat him out of part of his day’s wages, Magneto inadvertently used his powers to intimidate the man to pay the money he owed.

The slight did not go uncontested, however, as the employer reported Magneto to the authorities who attempted to arrest him. So concerned were they with their duties, the authorities did not care that Magneto was attempting to rescue his daughter from the inn they had been living in, currently a blazing inferno. Helplessly watching as his daughter burned alive unhinged Magneto, and his emerging mutant powers suddenly killed everyone,

save for his loving wife, Magda. But even this was denied to him, as Magda was horrified by her husband’s actions, declaring him a monster and running off into the night. [Classic X-Men #12] Being called a monster by the one who he loved the most, added to his all too horrific experience at the concentration camps for being born different would shape Magneto’s views on the world. It would eventually lead to his being labeled one of the most dangerous men on Earth, with the will to back the title up with actions.

Xavier also lost his parents when he was a youth - but both to accidents and natural causes, rather than the genocide that Magneto had escaped. Xavier had been born into wealth, his family estate eventually worth billions. His father had been a nuclear physicist at

Alamogordo, New Mexico, where he perished during a nuclear test blast. Month’s after Charles’ father’s death, Charles’ mother found comfort in the arms of her late husband’s co-workers, Dr. Kurt Marko. However, shortly thereafter, after learning that Kurt had only married her for her fortune, Charles’ mother died as well, seemingly of natural causes but perhaps related to her escape from the loveless marriage through alcohol. Xavier was then alone with his stepfather and new stepbrother, Cain Marko, who took great joy in tormenting the younger, and weaker, Charles.

Eventually, Cain’s temper got the best of him and caused an accident in his father’s lab, leading to Kurt Marko’s death. With his dying breath, Kurt laid rest fears Xavier had formed regarding his father’s demise, as well as addressing his secret belief that he had abilities almost too fantastic to believe - that he could read minds. [X-Men (1st series) #12]

Xavier seems to have inherited at least the bulk of the estate, possibly sharing a small portion with his stepbrother, Cain. As fate would have it, however, both their paths separated during their time together in the military in Korea, where Xavier believed Cain dead in a cave-in. Eventually discharged from the military, Xavier used his fortune to travel the world and learn about its wonders.

While both now lacked family, the difference was startling. Magnus, first the victim and survivor of genocide, then losing his daughter and finally rejected by the only one left in his life that he loved, it is no wonder that he forswore humanity, realizing that it would eventually reject him and his kind, just as his wife had done him… and the Nazis had done his people. Arguably, Magda knew Magnus better than anyone else in the world. If she rejected him, how could the rest of the world accept those like him?

Meanwhile, though Xavier indeed was now an orphan, he was wealthy beyond his ability to spend. A man of means and leisure, and possessing incredible yet secret abilities, it could be argued that Xavier had the luxury of idealism… while Magnus lost his with the rest of his family.