FLIPSIDES OF THE SAME COIN (the dreams of Xavier and Magneto): Page 2 of 8

For all conflicts, there must exist the spark of discord - so it would be for Charles Xavier and the man known to the world as Magneto. At the time of their meeting in a hospital in Haifa, Israel, both Xavier and Magnus - as Magneto was calling himself at the time - were world travelers, searching for something they knew not. [Uncanny X-Men #161]

Still in his twenties, Xavier had already been a soldier and was using his family fortune to travel the world, while at the same time exploring his burgeoning mental abilities. During his journeys,

Xavier had been contacted by Daniel Shomron, with whom he had briefly served in the military. Dr. Shomron had asked Xavier to come to his facility, as he recalled his work with some of the most severe mental cases during the war. Upon arriving, Xavier met a volunteer at the facility - a Holocaust survivor named Magnus. In time, Xavier would learn than this was an assumed, fabricated name, but for now Magnus quickly became one of his greatest friends. Along with Gabrielle Haller, a patient at Dr. Shomron’s hospital and the first Xavier was able to help, Xavier and Magnus traveled the wondrous and fascinating land.

Along the way, as the two grew closer, Xavier began to speak of his still nascent theories on human evolutionary mutation - shaped both from his own personal experience, as well as his degrees on genetics he had earned. Much to Xavier’s delight, however, Magnus not only took him seriously, but actively debated what would happen as a result of the public learning such “theoretical” mutants existed. Xavier could tell that life had scarred Magnus deeply, but never so much as when Magnus explained what he thought must happen. Magnus firmly believed that the two species of humanity could never co-exist, and that mutants would have to become the dominant one if they were to survive.

Though having their differences, Xavier and Magnus continued their friendship, until events conspired to separate them. Without warning, the hospital was attacked by an international terrorist organization called Hydra, which seemed to have been birthed from the ashes of the Nazi’s Third Reich. Shortly after the capture of Xavier and Magnus’ friend, 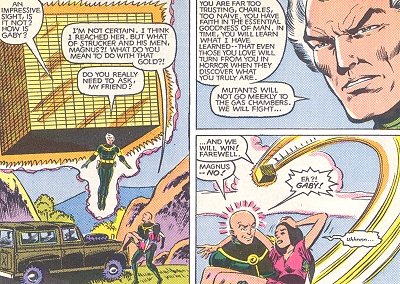 Gabrielle, the two learned that Gabrielle had been a living map, created during the last days of Nazi Germany, where an untold fortune in gold bullion had been spirited to a hidden cave in Kenya. With this fortune, Hydra’s leader, Baron von Strucker, intended to create a Fourth Reich.

Unluckily for him, Strucker’s plans were ended with the arrival of Xavier and Magnus, who had trailed Hydra to Kenya, disguised as Hydra soldiers. Using their powers, they defeated both the Hydra soldiers, and von Strucker himself. Victorious, Magnus decided to confiscate the gold for his own plans. The time for debate was over... and action had begun. The gold would still be used as seed-money, but instead of for a new Reich, it would be used to ensure mutant domination.

And so the state was set. Two friends, disagreeing most vehemently. Both eager to shape the world into the future that they knew had to exist in order for their people - mutants - to survive. Magneto, having too many times been on the receiving end of humanity’s intolerance, had no interest in tempting fate. Clearly, mutants must rule if they were to survive.

In contrast, Charles Xavier was an idealist - seeing the world not as it was, but how it should be. Was this truly naiveté or a unique vision of what must come? Over the next several years, the two would use their fortunes - Xavier’s family’s and Magneto’s stolen gold - to shape their plans. Likewise, Magneto and Xavier would enlist followers to their cause, who would help them. Both would face highs and lows in their personal crusades, and both would face abandonment and betrayal by their followers. They would be branded fools by those whose counsel they held dear and others would take their dreams and use them in ways they would scarcely condone.

While the conflict between Xavier and Magneto, both direct and through their disciples, are legion and exciting - it is among the places that they were so similar that is most fascinating.