FLIPSIDES OF THE SAME COIN (the dreams of Xavier and Magneto): Page 6 of 8

While both Xavier and Magneto have briefly gone down the path of their counterpart, they have done so as a result of a questioning of the path they had previously chosen. But what would have happened if these different paths had been the once they originally traveled? While they would only be able to wonder at this, one can easily find such examples by peering through the dimensional veil to alternate timelines.

During one of their travels, the dimensional-hopping Samaritans known as the Exiles happened upon a reality where they were charged with the assignment of finding their “greatest teacher.” 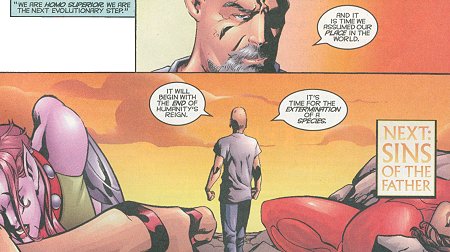 Without another thought, they assumed that it was Charles Xavier. Soon they discovered that he was being imprisoned in a heavily guarded facility, which they were easily able to infiltrate. Upon releasing Xavier, they learned that he was not the same man that they knew. Instead, he professed a dogma that Magneto would have welcomed as his own. Before the Exiles were able to remedy their mistake and end the threat of Charles Xavier, he had used his mental abilities to mindblast a section of the city of Phoenix, Arizona - rendering an estimated quarter of a million people comatose, possibly brain dead. [Exiles #1-2]

Another example, this one of Magneto’s change of direction, occurred when David Haller - Xavier’s own son - used his prodigious abilities to travel back in time to stop Magneto from ever being a threat to his father’s dream. Without Magneto to vex his father, what might he have been able to accomplish? However, the plan went awry when he arrived in Israel, shortly after Xavier and Magnus’ first meeting, and dealt his mortal blow. Willing to lay down his life for his friend, Xavier jumped before the would-be assassin and took the blast himself. The resulting divergence of the timeline caused a horrific future, which was ruled by the ancient evil known as Apocalypse. Those who managed to eek out an existence in this era called it the Age of Apocalypse. 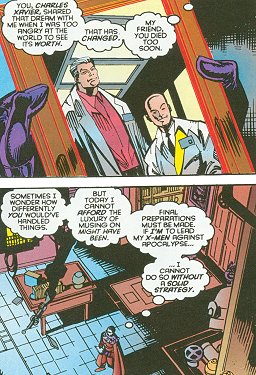 In this reality, Xavier never lived to form his X-Men or profess his dream - yet they existed. So traumatized by the death of his friend, Magnus had adopted his calling in payment for his sacrifice. Years later, after donning the identity of Magneto, Magnus formed the X-Men and did his best to inspire others to follow the dream.

Sadly, however, this Magneto seemed no better at forming a movement than his counterpart. While the X-Men were resolute in their mission, their focus was more on deposing the genetic tyrant Apocalypse. Even the recruitment seemed to reflect Magneto’s leadership - as few of his original X-Men stayed with the group for very long. Still, Magneto and his allies were eventually able to fulfill their mission and eliminate the tyranny of Apocalypse - but at greater cost than Xavier had ever had to pay.