FLIPSIDES OF THE SAME COIN (the dreams of Xavier and Magneto): Page 7 of 8

It can be said that there is a fine line between the qualities of inspiration of leadership and the ways of attraction of a different nature. Like most men of vision, Xavier and Magnus wished for someone with whom they could share their lives. However, like other men of power or drive, their ambition would many times getting in the way - with true romance coming when they set those aspirations aside.

For Xavier, he had indeed been rejected by Amelia Voght when she saw that he was forming his X-Men, which she could only see leading to the very violence that he wished to avoid. Earlier, however, he had met a woman with whom he almost married - and while she wed someone else, she never abandoned him. Her name was Moira Kinross MacTaggert. [Uncanny X-Men #117] 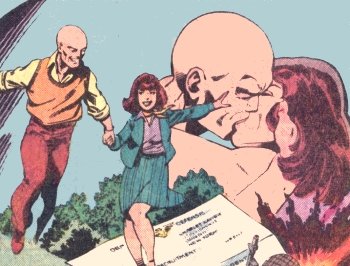 Charles had met Moira - then simply Moira Kinross - while studying for his doctorate. The two dated for several months, and had even began talking about marriage, when Xavier was drafted. Though she promised to wait, she eventually sent Charles a letter, stating that she was breaking off their engagement. Later, Xavier would learn that she subsequently married Joe MacTaggert.

Moira and Joe’s marriage would not be a pleasant one and it eventually ended in separation. However, Xavier never seemed to truly hold hard feelings against Moira, simply having his love for her turn to more for friendship. Indeed, they continued to correspond, as she toiled away at her own research facility, studying the genetic X-factor that caused mutation. Though he chose not to include her in on his early career as leader of the X-Men, Moira did become a stalwart ally in his cause, never wavering, even at the point of her death, defending Xavier’s dream. [X-Men (2nd series) #108]

In contrast, Magneto has never enjoyed the company of a woman at his side during his various conflicts against humanity. For the most part, it seems that he shunned the fairer sex, most likely trying to forget the rejection of his wife so long ago. Her declarations that he was a monster rung in his ears for years to come.

However, Magneto did seem to allow himself the luxury of love once again years later - ironically during a period when he had forsaken his own path of mutant superiority. Shortly after the battle with the X-Men on his isle in the Bermuda Triangle, Magneto returned to his orbital fortress, Asteroid M, just before its destruction. Falling to Earth, he was rescued by the seafaring Lee Forrester. At his request, Lee took Magneto to his former isle base to recuperate, where the two grew more intimate. [New Mutants (1st series) #23-24, 26, 28-29]

At first, Lee was cautious about her feelings for the infamous terrorist, but alone on the island she could see his human side. Magnus and Lee’s romance did not have time to fully grow, however. Having recently faced the seemingly omnipotent Beyonder alongside the X-Men before, Magneto was called by Xavier to aid in their battle against his return. Never again would Magnus and Lee explore what might be - but it is clear that such a relationship could only have existed during the brief time that Magneto had renounced the ways he had so vehemently advocated.