The early life of the mutant known as Avalanche is shrouded in mystery. Apparently, he was born Dominikos Ioannis Petrakis (Greek: Δομήνικος Ιωάννης Πετράκης) in Agios Nikolaos, southeastern Crete, Greece. At some point, he immigrated to the United States. Eventually, he turned to a life of crime and ended up joining the terrorist group known as Brotherhood of Evil Mutants, led by Mystique.

In one of the earliest known actions of this incarnation of the Brotherhood, Mystique ordered Avalanche and his teammate, Pyro, to kill Carol Danvers aka Ms. Marvel. Avalanche and Pyro arrived at the hotel Carol was staying at in Hong Kong and attacked her. During the battle, despite 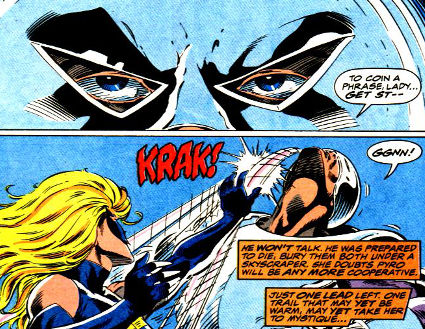 his apparent disregard for the lives of passers-by, Avalanche betrayed a concern for the well-being of his teammate, Pyro, and intervened to stop Ms. Marvel from pummeling him. The Greek mutant was determined to fulfil his mission and kill Ms. Marvel by any means necessary, even at the cost of his own life. Upon realizing that Avalanche was about to bring the hotel down using his seismic waves, Ms. Marvel knocked him out. [Marvel Super-Heroes (2nd series) #11]

Shortly afterwards, Mystique gathered together the Brotherhood for a new mission: the assassination of mutant-hating politician Robert Kelly. The team stormed into the US Senate, only to find themselves facing the X-Men. The Brotherhood was quickly defeated and Avalanche and most of his teammates, including Blob and Pyro, were taken into custody. [X-Men (1st series) #141-142]

Avalanche’s experience with the X-Men proved to be demoralizing. Determined, by his own admission, to escape the “super-team scene,” he decided to go solo and escaped prison on his own, disobeying Mystique. On one of the rare occasions in which he demonstrated initiative, Avalanche conceived a rather ludicrous scheme: he decided to travel to Los Angeles and blackmail the state of California into paying him an enormous sum of money to keep him from using his power to trigger the San Andreas Fault. With the money he would get, he planned to migrate to “sunnier climates.” He was quite self-satisfied with his plan and even complacently referred to himself as the “guy who blackmailed California.” In fact, he claimed he preferred being solo than going back to following Mystique’s orders.

Avalanche launched his scheme by wreaking havoc to the Los Angeles International Airport. Unluckily for him, a man known as Landslide, whose powers were, improbably, similar to Avalanche’s, appeared on the scene. Landslide lived below ground, together with Mole Man and his people. The tremors caused by Avalanche threatened Mole Man’s underground realm as much as they threatened the surface world, and Landslide was there to stop him. The two began to fight and Avalanche entertained the possibility of blackmailing Mole Man himself, thinking that gold and diamond were perhaps to be found underground.

However, things were even more complicated by the appearance of the Hulk, who happened to be nearby. Inspecting the mayhem he had caused, Avalanche had a rare moment of self-awareness 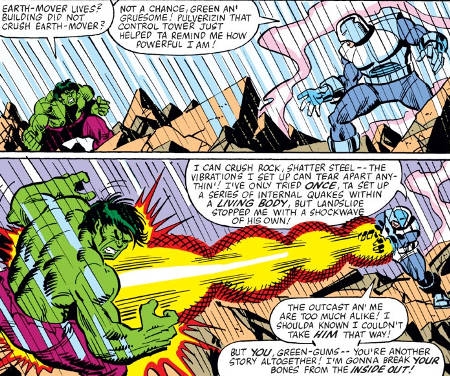 when he realized he reveled in destruction – a fact which he felt probably made him “weird.” Hulk and Avalanche then proceeded to fight. Avalanche, who took pride in being a mutant and thus superior to a mere super-powered Homo sapiens, was mortified to discover he couldn’t handle the Hulk. His vibratory force rebounded off the immovable green goliath and the feedback caused multiple fractures along every bone in Avalanche’s arms. He collapsed and was taken into custody. [Incredible Hulk (2nd series) #263]

Avalanche ended up at the Ryker’s Island prison for super-powered criminals, where he was reunited with his Brotherhood teammates. Shortly afterwards, Mystique and Rogue broke into prison to help them escape. At that exact moment, the Avengers arrived on the scene, tipped off by Spider-Woman. Following a difficult battle, Avalanche and the rest of the incarcerated Brotherhood were again defeated, their prison break foiled. [Avengers Annual #10]

Convinced by now that the Brotherhood posed a significant national threat, the government decided to have them transferred to Windust Prison, a maximum-security facility in West Virginia. Once again, Mystique and Rogue broke into the facility to set the mutants free. On their way out, they were confronted by the space knight Rom, who had arrived there on false information that 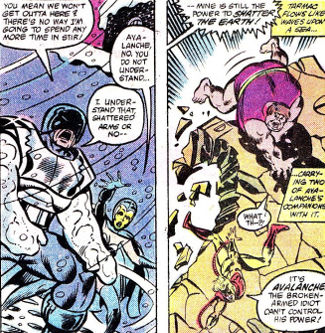 the prison inmates were kept as slaves. When Avalanche offered to help in the battle against Rom, Mystique was dismissive of him. She harbored a grudge against him ever since he had disobeyed her and escaped prison on his own. Furthermore, the fact that Avalanche was still recuperating from the injuries sustained during his battle with the Hulk meant he would be a liability in battle. Still, upon seeing his teammates struggle with Rom, Avalanche yet again disobeyed Mystique and tried to use his powers against the space knight. He only succeeded in precipitating the defeat of Pyro and Blob. Furthermore, he collapsed due to the exertion. Disgusted with her incompetent team, Mystique fled, taking only Rogue and Destiny with her. [Rom #31]

Eventually, Avalanche and the others once again escaped and reunited with Mystique. The Brotherhood soon fought against the X-Men, and Avalanche proved particularly vicious and effective in battle, freezing Colossus into nitrogen. Mystique fled, after first negotiating the freedom of her Brotherhood teammates, who were about to be captured by the police. [Uncanny X-Men (1st series) #177-178] The incident made Mystique realize she had to broker a deal with the government to safeguard the future of the Brotherhood. All Brotherhood members were granted full pardons and began working for the government under the alias “Freedom Force.” Their first mission was to track down and apprehend Magneto, which they successfully did. [Uncanny X-Men (1st series) #199]

Avalanche and the rest of Freedom Force later showed up in San Francisco to arrest the X-Men, who were considered fugitives. [Uncanny X-Men (1st series) #206] Following this failed mission, Freedom Force soon convened to discuss a new assignment: the arrest of another fugitive, the mutant Rusty Collins, who was linked to the mutant hunters known as X-Factor (actually the five original X-Men posing as mutant hunters). Avalanche expressed his discontent at the prospect of hunting down one of their own kind, although he was eager to tackle the mutant-hunting team. He also expressed the view that it was a really difficult time to be a mutant, what with the government trying in various ways to contain the mutant “problem” through the Mutant Registration Act. The meeting of Freedom Force, however, soon devolved into a fight between Avalanche and Blob. The two had never particularly liked each other and the Blob now openly mocked Avalanche for his “weak” powers. Mystique called them to order, but not before Avalanche and Blob damaged

the floor. Mystique assured them that the repair expenses would be deducted from their salaries. The team soon tracked down Rusty and X-Factor. The Force was unable to capture Rusty, but Avalanche’s powers proved effective, and he managed to stall the X-Factor’s progress on two occasions. [X-Factor (1st series) #8-9]

In the next few months, Avalanche and his teammates were given all sorts of tasks, from arresting the West and East Coast Avengers, to training the newly appointed Captain America. [Avengers Annual #15, Captain America (1st series) #333] A few months later, Freedom Force was again dispatched to capture the X-Men, who had failed to comply with the Mutant Registration Act. Against all odds, the two teams ended up working together when Dallas was transformed into a place populated with dinosaurs and Neanderthals, courtesy of the magical Adversary. The Freedom Force eventually fled in the commotion, ignoring Destiny’s predictions that the X-Men would die. [Fall of the Mutants crossover] Before leaving Dallas, Freedom Force was caught up in successive fights with New Mutants and X-Factor. [New Mutants (1st series) #65, X-Factor (1st series) #30-33]

Sometime later, Freedom Force was, ironically enough, forced to save the life of Senator Robert Kelly, who had been kidnapped by a drug cartel in South America. During the battle, Avalanche and Blob again openly displayed their dislike of each other, forcing Mystique to chide them and remind them of their status as federal agents. Upon seeing the three million dollars that the local drug lord kept stashed, Avalanche almost went out of breath, probably recalling his old dream of getting rich and retiring from crime. [Marvel Comics Presents (1st series) #14] Freedom Force was later sent to capture the New Mutants and Avalanche again impressed with his power, triggering a tidal wave that engulfed the New Mutants’ high-flying Ship. [New Mutants (1st series) #78]

Next on, the team attacked Firestar and tried to capture her, intent on assessing whether she could be a potential recruit for Freedom Force or an enemy to be reckoned with. Ever the savage villain, Avalanche wanted to launch a vicious attack against Firestar and was displeased when Mystique insisted they treat Firestar with “kid gloves.” Freedom Force’s plan backfired as Firestar kidnapped Mystique. Avalanche suggested they take initiative and track down Mystique through the tracking device in her belt, which they did, although by the time they got there Firestar had already freed her. [Marvel Comics Presents (1st series) #82-86]

Freedom Force later arrived at Muir Island, where they confronted the Reavers. The team suffered heavy casualties in the battle, as Destiny and Stonewall were killed, and Avalanche’s stomach was sliced open by Lady Deathstrike. [Uncanny X-Men (1st series) #255] With Mystique taking some time off to grieve, Blob, Pyro and a still convalescing Avalanche decided to act independently – and foolishly. They picked a fight with their old enemies, the Avengers. During 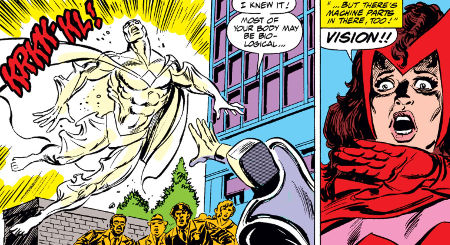 the battle, Avalanche caused great damage to the Vision’s synthetic body. The Vision’s wife, Scarlet Witch, lashed out in retaliation, telling Avalanche that she was going to support her husband over her fellow mutants, a declaration which several mutant-phobic eyewitnesses received with surprise. [Avengers (1st series) #312] Avalanche, Pyro and Blob were later reprimanded by Mystique for their antics.

Furthermore, Avalanche’s fresh injuries reopened his stitches, causing a grumbling Mystique to dismiss him from a new mission she assigned to Freedom Force – the capture of the Hulk. Avalanche ironically thanked her for excusing him, although he may have felt genuine relief at not having to go up against the Hulk again. [Incredible Hulk (2nd series) #369] Avalanche returned back to active service during the next assignment, when the Force was tasked with infiltrating the maximum-security prison The Vault to defeat the super-powered inmates who had started a riot inside. Avalanche was extremely nervous on hearing the impressive and long list of villains on the loose, although the mission ended in success. [Marvel Graphic Novel #68]