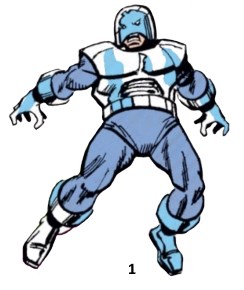 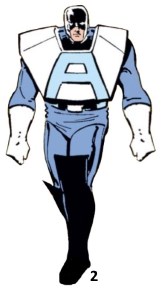 1) When Avalanche first joined the Brotherhood of Mutants, he was wearing an all-grey bodysuit with silver-colored, metal armor that covered his torso. As well as silver gloves and boots, he also wore a metal helmet. [X-Men (1st series) #141]

2) After the Brotherhood became Freedom Force, Avalanche altered his costume slightly by adding a big "A" onto his armor and knee-high black boots. [Uncanny X-Men (1st series) #177] 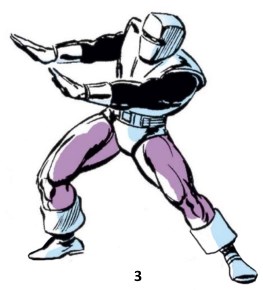 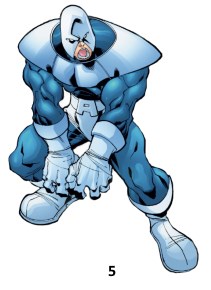 3) Not long after, Avalanche adopted a new costume for Freedom Force that consisted of a purple bodysuit and silver-metal armor that covered his entire torso and groin. His helmet now enclosed his whole head and the look was finished off with silver boots and gloves. [X-Factor (1st series) #8]

-) Avalanche briefly altered his costume by reducing the amount of armor on his torso and he took to wearing a much sleaker helmet. [X-Factor (1st series) #102]

4) The next time he changed his costume, it was when he joined X-Corp and adopted a look to match the rest of his team. It was a full-black bodysuit with red piping and belt, plus a black helmet with a visor. [Uncanny X-Men (1st series) #401]

-) As part of Exodus' Brotherhood, Avalanche wore a variation of his first Freedom Force costume.

5) After going it solo, Avalanche went with a modified version of his first costume. The armor on the torso was limited to just his shoulders and he now wore a belt with an "A" on it. [New Mutants (1st series) #9]