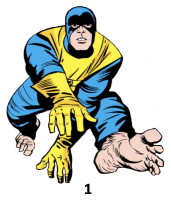 1) Like the other original X-Men, the Beast was given a standard training uniform by Xavier. His version, however, included no boots or gloves, as they would hinder his ability to cling to or bounce off walls. [X-Men (1st series) #1] 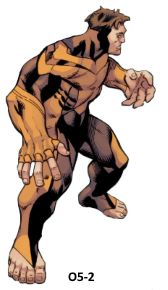 O5-1) Beast and the original five X-Men received new uniforms in the future. Hank's kept the same basic pattern as the rest of the team, with orange as an accent color. His suit naturally had no gloves or boots (leaving his dexterous digits free) as well as extra padding on his knees and a set of orange goggles. [All-New X-Men (1st series) #18]

O5-2) Beast's next costume was very similar, a brown bodysuit with sections of tan layered on top. His 'X' symbol was situated on his left shoulder instead of centered like his teammates. He continued to keep his feet and fingers free. [All-New X-Men (2nd series) #1] 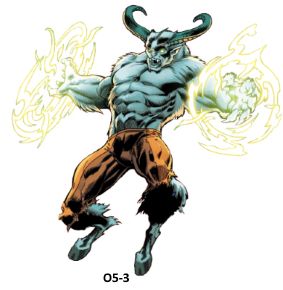 O5-3) Thanks to the Orb of Zarjul, young Henry developed a secondary form that represented his connection to magic. He became larger, covered in white fur from head-to-toe, and with horns on his brow. His legs now ended in cloven hooves instead of feet. [All-New X-Men (2nd series) #16]

O5-4) Young Hank used his counterpart's blue and red costume color scheme for the first time in his next look. This sleeveless red and blue body suit also kept his dexterous digits exposed. He wore blue fingerless gloves and a black and red hoodie over his main costume. [X-Men: Blue #1]

-) Jean Grey later redesigned the training uniforms and, while hers changed into a more “female” version, the ones of the male X-Men more or less stayed the same. She only added a red belt and the yellow shirts were no longer covering the entire upper body. [X-Men (1st series) #27] 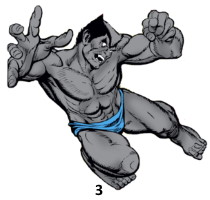 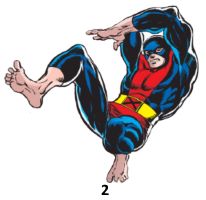 2) After the team had proved themselves in battle time and again, Xavier rewarded them with the right for individual costumes. This set was again designed by Jean, whom Xavier had secretly told of this plan before. [X-Men (1st series) #39]

3) During the time Hank had left the X-Men to work for the Brand Corporation, he discovered a chemical factor that caused mutations. Drinking a serum derived from that factor, he further mutated and was now a true Beast. [Amazing Adventures (2nd series) #11] 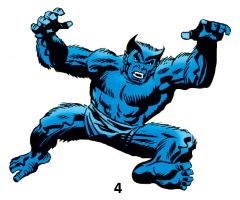 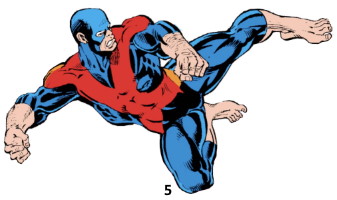 4) After a couple of days, the gray fur changed color to blue/black. [Amazing Adventures (2nd series) #15] In this look, the Beast was a member of both the Avengers and later on the Defenders. 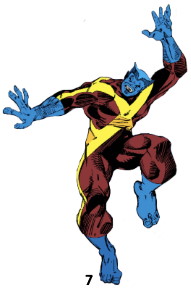 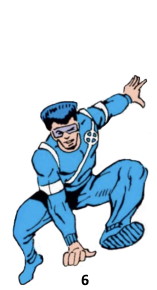 5/6) Right after the original five X-Men reunited to form X-Factor, Hank was kidnapped by a scientist who experimented with a mutation repressing serum on him. Now again looking human, the Beast could, just like his teammates, switch between costumes and appear as either member of the mutant team X-Terminators or the mutant hunters X-Factor. [X-Factor (1st series) #4-5]

7) After they saved New York from Apocalypse and his Horsemen, X-Factor finally ended their charade and exposed their cover to the media. They became celebrities and a thankful designer, whom the team had rescued earlier that day, created a new look for them. The new costumes were close to the X-Terminator uniforms but the color schemes were different. [X-Factor (1st series) #26] Even after an encounter with Infectia caused Hank to mutate again, he still wore the brown and yellow outfit of top of his fur, sans mask. [X-Factor (1st series) #31] 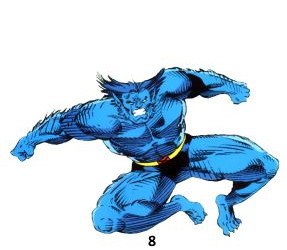 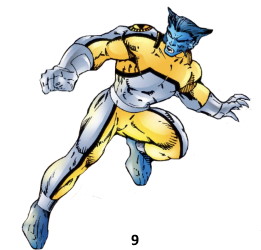 8) When Beast rejoined the X-Men he went back to wearing a version of the costume he wore whilst with the Avengers. This time he wore black trunks that had a yellow belt with the X-logo on the buckle. [X-Men (2nd series) #1]

9) When the X-Men were abducted to space to help battle an alien invasion, they had nothing to wear but some Shi’Ar mining suits and other uniforms. The exact capabilities of the suit worn by the Beast are unknown. [Uncanny X-Men (1st series) #342]

-) Back on Earth, Hank returned to his usual look. 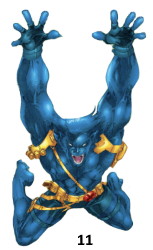 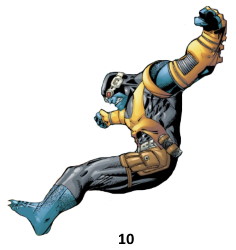 10) For a time, the Beast had left the X-Men to devote more time to his biochemical studies. When he returned, the X-Men adopted some sort of team look. Each costume had a big X across the chest area and Hank’s version included many gadgets and pockets and a mask with red goggles. They were an early version of the special glasses used by the X-Treme X-Men team. [Uncanny X-Men (1st series) #381]

11) After the X-Treme X-Men left the mansion, they came up with a set of new costumes, probably to set themselves further apart from the other X-Men groups. The Beast’s outfit still included some pockets and gadgets, though allowed more freedom of movement than the version he wore before. [X-Treme X-Men (1st series) #1] 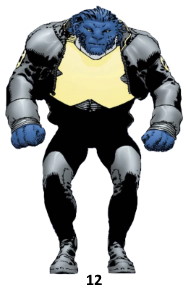 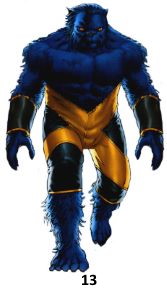 12) Massive injuries forced Hank to return to Westchester. During recovery, he experienced a secondary mutation, resulting in a giant, bulky cat-like appearance. Just like the other X-Men at the mansion, Hank no longer wears a bright costume, but is now using some leather outfits that almost look like street clothes. The members have a vast supply of different shirts, coats and jackets from which to pick. [New X-Men (1st series) #114]

13) Beginning with the reorganization of the X-Men squads after Magneto’s attack on New York City, many members assumed new colorful costumes to replace the previous black leather look. Hank's new suit consists of black armbands with yellow trim, a set of pants with a large yellow 'X' emblazened on it, and no boots or shirt. [Astonishing X-Men (3rd series) #1] 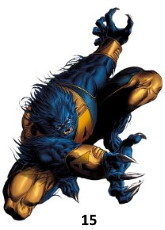 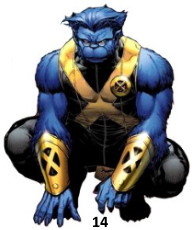 14) When the X-Men moved to San Francisco, Beast adopted a new costume to go with the change. He now wore a black, sleeveless bodysuit that had gold piping and a large gold X on the chest. He also wore gold-colored gauntlets on his wrists but chose to keep his feet and hands bare. [Uncanny X-Men (1st series) #500]

15) As part of the Secret Avengers, Beast adapted his previous X-Men costume and had a large gold “A” on the chest as opposed to an “X.” [Secret Avengers (1st series) #1] 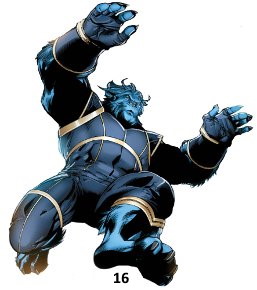 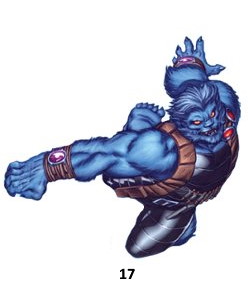 17) When Beast joined Wolverine at his school, he wore a more informal uniform of a pair of black dungarees with a tool belt strapped around the waist. He wore brown leather wristbands and shoulder straps as well as a pair of red goggles. He wore boots but they had the toes cut out so he was able to use them in combat. [Wolverine and the X-Men (1st series) #1] 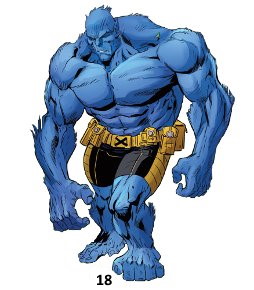 18) After mutating further, he simplified his look once again and just wore a pair of black trunks with yellow bands down the side. He would occasionally wear a tool belt and goggles as well with this look. [All-New X-Men (1st series) #5]

-) When Beast was empowered by the Black Vortex, he wore a silver full body armored suit that had numerous circular node up the front. His head was exposed but it was concealed in a translucent, red force field. When the effects of the Vortex left him, he reverted back to his pervious look. [Guardians of the Galaxy (3rd series) #24]

-) When Beast joined the Inhumans he kept his black trunks look when he was out on missions. [Uncanny Inhumans #1]