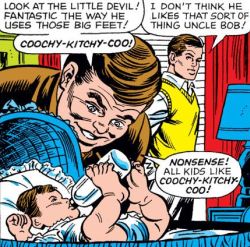 Henry Philip McCoy was born in Dunfee, Illinois, to Norton and Edna McCoy. Norton worked in a nuclear plant and it has been heavily implied that this might have been the cause of Hank’s mutation. From the moment of his birth, his large hands and feet made it obvious Hank was a mutant. As he grew up, the young boy demonstrated remarkable physical prowess, only equaled by his overwhelming intelligence and curiosity. However, his somewhat freakish appearance led to him being shunned by the 'popular' kids, especially in high school when he was given the nickname "Magilla Gorilla." Hank only started coming out of his shell thanks to Jennifer Nyles, a classmate he was tutoring in biology. In their study sessions, she got to know the real Hank McCoy, and on the night of their junior prom she showed up with a rented tux and told him he was taking her to the dance, period. When some kids at the dance starting jeering at the new couple, Jen hauled off and decked the lead heckler with one punch. The duo were inseparable from then on. Best friends, madly in love, but still not technically "going out."

When in his senior year at high school the football coach asked him to kick a football, Hank not only kicked the skin off of it.  but he then threw a 90 yard pass that knocked the coach off his feet. The coach was still leery about letting McCoy on as quarterback until Jennifer strong-armed him into doing it. Hank joined the team and became known as the Boy with the Golden Arm. Hank and Jen went different directions after high school - he stayed in the US while she went to London studying genetics. They still kept in touch and admitted they were in love with each other. One day, three masked men robbed the stadium and tried to escape across the field during one of Hank's college games. Hank kicked a ball and knocked down the first man with it. He then grabbed two helmets and knocked out the other two men. One man was still awake and pulled out a grenade, threatening to release the pin. Hank climbed to the top of a goalpost and leaped onto the man, taking him down. 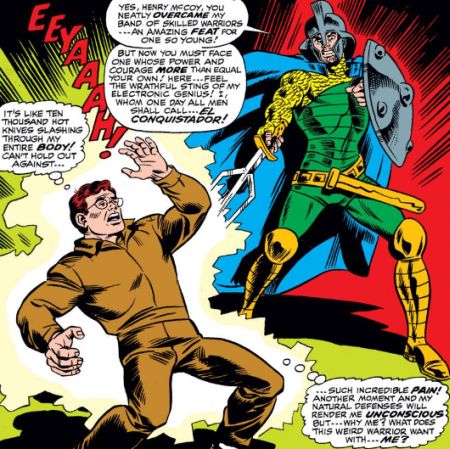 When his escapades were shown on the evening news, the villain known as the Conquistador decided that he could use Hank as a weapon in his plans. After testing his reflexes, the Conquistador attempted to kidnap Hank. His agents failed, but Hank was taken down by an energy blast from the Conquistador's gauntlet. The villain also kidnapped Hank’s parents and forced him to steal an experimental nuclear reactor for him in exchange for the McCoys' lives. However, when he returned to the hideout, the Conquistador told him that he would keep his parents indefinitely, until Hank was of no further use to him.

Hank attempted to escape and, just when he was about to be killed, the X-Men arrived, having registered the mutant activity. Together, Hank and the X-Men finished off the Conquistador and his men. Hank joined the X-Men as th 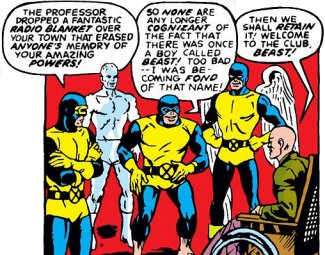 e Beast, since that was a childhood nickname the other kids had given him for having such large hands and feet. McCoy almost left the X-Men that same day, however, when he called Jennifer in London to tell her all that had happened, and she didn't even recognize him. Professor Xavier had wiped the memories of everyone who knew too much about Hank, including Jennifer's entire memory of her friend. The Beast grudgingly accepted Xavier's actions, and still stayed on as an X-Man. [backstories in X-Men (1st series) #49-53, Marvel Comics Presents (1st series) #85-88]

Shortly afterwards, Jean Grey (Marvel Girl) joined the team and the X-Men made their public debut fighting against Magneto. [X-Men (1st series) #1] Soon, Hank started hanging out in the 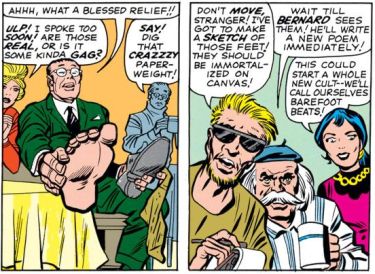 Cafè A-Go-Go with teammate Bobby. In what he thought was a quiet moment, Hank took off his shoes to get his oversized feet some relief, but the other customers noticed and actually started a barefooted cult, making poems about feet and having a small parade for their “king." Fortunately, Hank and Bobby were called away to a mission, before the situation got out of hand. [X-Men (1st series) #7]

When Hank faced some anti-mutant hysteria right after saving a child from falling from a great height, he became tired of saving a world that hated and feared him and was prepared to storm out of the mansion, leaving the X-Men forever. [X-Men (1st series) #8]

Instead, he was halted by the arrival of his own future self. More than a decade older and covered in blue fur, the adult Hank McCoy wanted the original five X-Men to help him save the future. Adult Hank explained how Cyclops had had a breakdown, murdered the professor and joined up with Magneto to start a mutant revolution. Young Hank was fascinated by what he heard, both the facts themselves and the mystery of what circumstances would ever lead him to threaten the space-time continuum in this way. He soon learned when the older Beast brought the five into the future to see the Jean Grey School for Higher Learning, and older Hank collapsed as his ongoing mutation was presenting a potentially fatal risk to his health. [All-New X-Men (1st series) #1-2]

Beast and the original five stole a Blackbird and saw for themselves how Cyclops had hooked up with Magneto, independent of the mansion's X-Men. Returning to the school, young Hank focused on the problem in front of him and went to work trying to save the life of his future self. With Jean's help, he telepathically linked with older Hank and reviewed his research into his condition. Together, the Hanks discovered an error in his math that offered a solution to the problem. With a lot of work and a little luck, Hank guided his older self's biology through the crisis, leading to another mutation but ultimately a clean bill of health. After what they had witnessed, Beast and the “original five” voted to stay in the future and fix the current mutant crisis before agreeing to be sent back to their own time. [All-New X-Men (1st series) #3-5]