While the evil that is Belasco first rose almost three quarters of a millenium ago, it was thankfully dormant for most of that time. Unfortunately for the world and those that would suffer at Belasco’s hands, it was released by the curious expeditions of the man known as Ka-Zar, the Savage.

On the southern tip of the planet, nestled between the millennia frozen glaciers of the Antarctic continent and hidden from the world at large, rests a tropical paradise called the Savage Land. Born Kevin Plunder, the man who would be known as Ka-Zar had been orphaned as a boy when his father’s plane crashed in this hidden wilderness. Along with his faithful pet and companions, including his lover, Shanna, Ka-Zar explored this grand, lost land to uncover its secrets.

This lost valley, filled with dinosaurs and dozens of undiscovered races of people, had been created as a game preserve 200 million years previously by an alien race called the Nuwali at the behest of an other-dimensional race called the Beyonders. This “park” had been abandoned and, millions of years later, discovered by the original Atlanteans, the people from whom the current Atlanteans derive their name. Fifteen thousand years ago, Atlanteans had turned a section of this land into an amusement park. It was in this amusement park that Ka-Zar happened upon Belasco.

Among his expeditions, Ka-Zar and his companions discovered an amusement park that seemed to be based off of Hell, as described by Dante Alighieri in his 13th century epic, the Divine Comedy. Further, to their surprise, they discovered the source of this connection: the 13th century writer had actually been there, seven hundred years previously. Lying on a table was the ship’s log for one Captain Dante Alighieri. Most of what is known about Belasco’s origins comes from this ancient tome.

According to the log, Dante had left Florence, Italy in pursuit of a sorcerer named Belasco. Whatever had been his true occupation, Belasco had secretly been an alchemist who practiced the black arts of sorcery. His goal had been to contact beings whom he called “elder gods” in an effort to gain immortality.

Before succeeding, however, he had been discovered and tried and convicted of heresy. Rather than this being his end, Belasco managed to escape and kidnapped a woman named Beatrice, for whom he had long harbored a secret passion. Unfortunately for Belasco, Beatrice had been the beloved of a man named Dante Alighieri, who set sail after the sorcerer, vowing to follow him to the ends of the Earth.

The chase ended in the previously undiscovered continent of Antarctica, where Dante and his surviving crew chased Belasco into the Savage Land. Inside this warm, lush world, which he called Pangea, Dante found strange, inhuman peoples. However inhuman, they were sympathetic to Dante’s plight and joined his quest. Belasco, in the meantime, had formed vast tunnels deep into the caverns of the valley in which to hide. By the time Dante and his men discovered the lair of the sorcerer, it was too late. Dante’s beloved lay upon an alter, about to give birth to the demonic children of Belasco, as promised by the sorcerer’s “elder gods.” 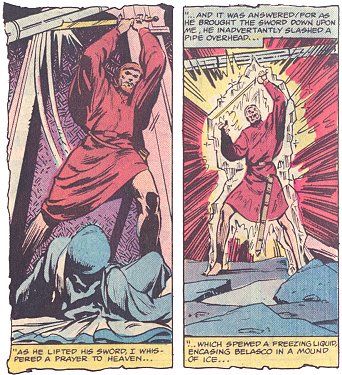 The unholy experience of giving birth to a race of demons was too much for the young Beatrice, who died during the ordeal. Driven by fury, Dante had fought the sorcerer, blade to blade, but the elder gods had kept their promise and made Belasco immortal. Eventually, Dante tired and Belasco managed to disarm his pursuer. All seemed lost until Belasco raised his sword to deal the killing blow. His steel blade opened a gash in an overhead pipe, from which spewed a freezing liquid that encased Belasco in a mound of ice.

Whether it was as a result of Belasco’s damage to the park’s machinery, rage by the Elder Gods at losing their disciple or by strict happenstance, an earthquake rocked the caverns. Dante managed to escape, but the collapsing caverns trapped Dante’s men and allies and seemingly forever sealed the frozen form of Belasco. Having lost his men and his beloved Beatrice, Dante returned to sea and the city of Florence. Years later, he would write his epic poem, the Divine Comedy, based loosely on the events that had just transpired.

Part 2 – Literary history made flesh of the present

Having read the log and believing it, Ka-Zar came to the revelation that not only was Belasco still alive, thanks to the Elder Gods’ gift of immortality, but he was free from his icy prison. During their entrance into the park, Ka-Zar and his group had narrowly survived the park’s rides and attractions, all of which seemed bent on attacking and killing the intruders. Ka-Zar theorized that they were under the control of the ancient sorcerer, who by now would have armies of demons born from untold generations over the previous seven centuries; demons, all ready for their final confrontation with mankind. Unwilling to let this scourge loose on humanity, Ka-Zar and his companions made their way into the caverns, searching for Belasco. [Ka-Zar the Savage #11]

Over the course of their search, the group was separated. By the time Ka-Zar found Belasco in his inner sanctum, he discovered that his companions had already fallen to 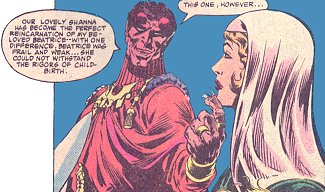 In fact, Shanna, Ka-Zar’s lover, had been declared by Belasco to be the perfect reincarnation of his Beatrice. Unlike Beatrice, he declared, she was not fragile and weak and would be able to withstand the rigors of childbirth. After becoming his bride, she would give birth to a new generation of demons.

On the cusp of victory after so many centuries and having Ka-Zar and his lover so easily in his power, Belasco could not resist to explain his actions. Confirming the logbook of Dante Alighieri, Belasco admitted to being a sorcerer from ancient Florence and his pact with the Elder Gods. 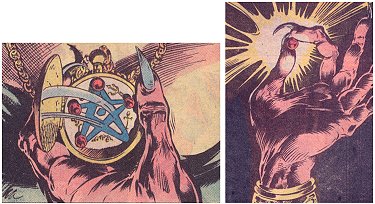 It was they who had directed him to the Savage Land, which, they told him, would be the perfect location upon which to carry out the spell. The spell itself would be centered around a chained locket, which would have an incomplete pentagram inside, with bloodstones at each star’s point. Fearful of betrayal from his gods, Belasco kept the final bloodstone until their part of the pact was completed.

As stated in the logbook, Belasco’s triumph had been interrupted by the arrival of Dante. Rather than fight, Belasco had looked for the locket so that he may have completed the spell and win by default. Unfortunately, he learned too late that they had lost it during their descent into the caves and was forced to resort to fighting by sword instead of spell. Equally unfortunately, Belasco had been frozen by the freezing liquid for centuries. Had it not been for recent volcanic activity, he would still have been frozen. Now freed, he had been searching for weeks for the locket. How fortunate for him, he now declared, that Ka-Zar and Shanna had discovered the missing locket during their descent. Now the spell could be complete.

Rather than kill Ka-Zar, however, Belasco made the mistake of imprisoning him for a later death. Belasco’s mistake was further compounded when another of Ka-Zar’s companions, the Atlantean android, 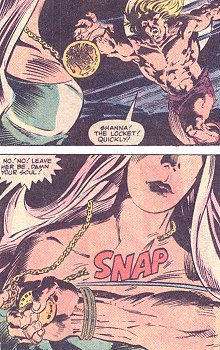 Dherk, managed to free Ka-Zar from his icy chamber, even though he had been dismembered and nearby destroyed under Belasco’s control. With the help of other dwellers of the caverns, all enemies of the dark sorcerer, Ka-Zar managed to arrive at Belasco’s unholy ceremony, just as he was completing the spell. Once again on the cusp of success, victory was stolen from Belasco when another companion of Ka-Zar, a winged Aerian named Buth, whom Belasco had already believed dead, returned with an army of his people and attacked.

During the ensuing chaos, Ka-Zar made his way through Belasco’s armies of harpies and grabbed the ancient locket before the spell was complete. Making haste of the moment, Ka-Zar tossed the locket into the fires of the volcano, destroying it and the bloodstones it contained. Having failed once again, Belasco could only look up in vain at the tear of reality he had created, which was quickly closing. The glare of the Elder Gods beamed their hatred and accusations of failure into his black heart. 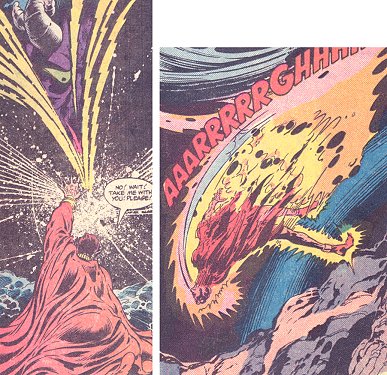 Having longed for so long to be with these beings whom he worshipped, Belasco plead with them to take him with them. Not tolerant of failure, the Elder Gods had other plans and cast Belasco into the fires of the volcano, who screamed in pain the whole way down. With the dark sorcerer gone, his demonic creations ceased to exist, seemingly ending his threat forever. The crisis passed, Ka-Zar and his companions returned to the surface and their exploration of the Savage Land. [Ka-Zar the Savage #12]