Part 9 – Of Cats, the Number Four and Greek Letters

After his defeat by Illyana Rasputin, Belasco was not heard from for some time. After his loss of his power base and servants, he might not have known how to proceed with his long-term plans. True, he was now free of his dimensional prison of Limbo, but he was now on Earth, a world upon which he had not stepped for seven hundred years. However, when next Belasco was encountered, he was done so by the self-styled Fantastic Four, deep within the bowels of the Earth. 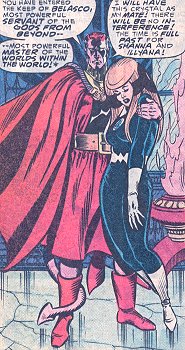 After surviving a conflict between the subterranean Moloids, Tyrannoids and Lava Men, the Fantastic Four, led at the time by the Thing, decided to explore the extensive caverns that comprised the realm of the Mole Man. Through their exploration, the foursome stepped through several portals, or “warps,” which led to other caverns, possibly as far away as the other side of the world. In one such cavern, the foursome realized that one of their number, the element controlling Inhuman called Crystal, had disappeared. Fortunately, Crystal had managed to leave behind a clue to where she was abducted. The remaining members (the Thing, Human Torch and Ms. Marvel) followed closely. The trail led to a large castle, in which lived the exiled sorcerer, Belasco, who had decided to take the beautiful Crystal as his bride. [Fantastic Four (1st series) #314]

Despite Belasco’s bravado, the combined strength of the Thing and Ms. Marvel made short work of the sorcerer and the foursome made their escape. Traveling through another warp, the group found themselves at the gates of yet another grand, underground city. This one was inhabited by a race of cat-people, whom the Thing had met before, during an adventure with the West Coast Avengers. [West Coast Avengers #6-8] While the Thing had learned in that adventure that the Cat People had been created by ancient sorcerers, the west coast group of Avengers had returned later to learn that the people were, in fact, demons. Standing among their number, Belasco announced to the Fantastic Four that he had not only been among those sorcerers, but he had been the greatest among them. It was not until later that he had turned his attention to the Elder Gods and grew greater in their service.

Surrounded as they were by the Cat People, it is unlikely that they gave much concern to whether Belasco’s claim was accurate or bravado. However, had they had time to consider this, it might not have rung true. According to the logbook of Dante Alighieri, Belasco had been sorcerer, but evidently not one of great power if he had been captured by his contemporaries and placed in prison. Also, Dante claimed to have been from Florence of the 13th century, some 700 years ago. According to their own history, the Cat People had been created by ancient sorcerers nine hundred years previous, two hundred years before Belasco’s rise to power.

There are two possibilities. The first is that Belasco had been a disciple of the order that created the Cat People and had only claimed to have been a more important part of that cabal. The problem with this theory is that, according to the history handed down by the Cat People, the original Tigra, their champion, had slaughtered their enemies, presumably the rest of the sorcerers. [West Coast Avengers #6] If this is the case, Belasco could not have been part of their lineage. The second and more likely possibility is that Belasco, upon losing his mastery of Limbo and the demon servants that accompanied it, needed a replacement headquarters and lackeys and found the city of Cat People gullible and easily convinced at his story. By claiming to be their progenitor, he could effectively take over without challenge.

Whatever the truth, the Fantastic Four did not stay around long. Despite the might of Belasco and being surrounded by hundreds of the Cat People’s warriors, the foursome escaped and departed through another warp portal, leaving Belasco behind.

As Belasco had allied himself with this one set of demons, so too would he try with other individuals who had been touched by the dark arts. For many weeks, the woman calling herself Witchfire had been a thorn in the side of Canada’s super-hero team, Alpha Flight, while being a member of rival Gamma Flight. In time, Witchfire became an ally to her former foes and joined Alpha’s junior team, Beta Flight. Still, an ally, most of Witchfire seemed to be a mystery, even to herself. 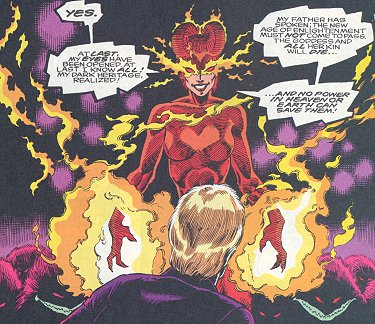 Called Witchfire by name, she wielded the substance of the same name, displaying semi-magical abilities that seemed more from the side of darkness than that of light. This dichotomy finally came to a turning point when she began to hear a voice in her head, claiming to be her father and trying to urge her on in power and ambition. Increasing her abilities, Witchfire’s “father” directed her to move in opposition to the Goddess, a recent manifestation of Adam Warlock’s “good” side and whom had acquired multiple reality altering Cosmic Cubes in order to reshape Earth and the universe into Paradise Omega.

It seemed that Witchfire’s father wanted her to kill the Goddess, which would unleash the Dark Ones. Fortunately, Witchfire’s efforts were thwarted by the actions of Alpha Flight. After being severely injured by the Alphan called Wire, Witchfire returned to her senses with no memory of the events that had passed or who her mysterious “father” was. While the question of the validity of his claims remain unanswered, it was the demonic sorcerer Belasco whom had been communicating with Witchfire. [Alpha Flight (1st series) #122-124]

There seems to be little reason to believe Belasco’s claim, although anything is possible. Surely he could not have fathered a child on Earth during the time he was imprisoned in Limbo, but Witchfire’s mother might have been one of possible many girls taken to Limbo to become Belasco’s apprentice, just like Maire O’Connell or Illyana Rasputin. Impregnating such a woman and sending her back to Earth could have been a failsafe plan to one day have an outside agent, capable of ending his banishment and releasing him. However as Belasco managed to break free on his own several years later, he never had the need to reveal himself to his supposed daughter.

Another idea might be that Witchfire herself is a former apprentice of the demon, who after failing, at least in Belasco‘s eyes, could have been returned to Earth with no memory of what had transpired, leaving only the taint of a darkened soul. This would not make him her father in a biological sense, but in spirit.

A third answer would be that Witchfire’s supposed heritage was a lie created by a prince of lies, an attempt to take advantage of situations by inserting his dark will to unsuspecting pawns. If Witchfire had managed to succeed in her task, Belasco could have had access to multiple Cosmic Cubes, making him one of the most powerful entities in the Multiverse.