Still, even as Illyana returned to her brother and the X-Men, seven years older than how they had last seem her (mere seconds had passed for the X-Men, due to Limbo’s status outside of time and space) [Uncanny X-Men #160], Belasco knew that Illyana had been corrupted and the three bloodstone in her locket could still mean his ultimate triumph. Despite this significant setback, Belasco wasted no time in continuing his machinations in Pangea. Upon his return to Ka-Zar, the android, Dherk, had told Ka-Zar and his companions about Mt. Flavius’ imminent eruption and devised an explosive to relieve some of the magma pressure by diverting it through a newly created tunnel. Both Ka-Zar and Shanna agreed to this desperate mission, but not before Dherk handed Ka-Zar a gem-embossed ring to give to Shanna as an engagement ring. The gem had been fashioned from the stone Dherk had discovered in the bowels of Mt. Flavius.

Over the next few hours, Ka-Zar and Shanna managed to execute the plan with only a few obstacles. Confident that all had seemed to go according to plan, the couple returned to their village, intending to announce their nuptials and plan a wedding ceremony. Ever the analyst, Dherk decided to investigate the ecological ramifications of his plan. After a brief encounter with the renegade Aerian scientist, Sep, Dherk was captured by Belasco, who revealed to the android that everything that had transpired as of late in Pangea had been part of his plan. 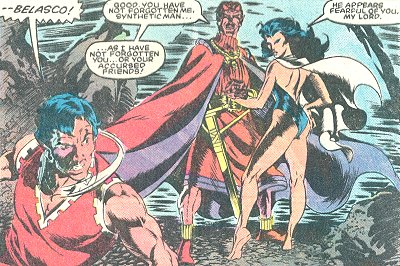 The gemstone that Dherk had found in the caverns of Mt. Flavius had been a Bloodstone, one of the originals created by Belasco centuries before. It also had been the only one to have survived the volcano’s fire. Once on Shanna’s finger, the Bloodstone ring had bridged the dimensional chasm between Limbo and Pangea, allowing Belasco to return.

Moving to the next stage, Belasco instructed his latest thrall, the Lemurian Queen Leanne of Zarhan to march with her army to the village of Shalan, where Ka-Zar and Shanna were about to be wed. As the Lemurian army attacked, Belasco revealed himself to be the High Priestess, Wend, in disguise. Now, with all of his most hated enemies assembled, Belasco teleported himself, along with Ka-Zar, Shanna, Queen Leanne and Leila, an innocent youth from a neighboring tribe called the Tree People, to his newly created mystic throne room, hundreds of feet below the surface of Pangea. Along with the true High Priestess Wend, Ka-Zar and Shanna were force-fed a magical draught, which began to transform them into demons, who would serve as the Adam and Eve to Belasco’s new race of demon.

After reclaiming the Bloodstone ring from the helpless Shanna, Belasco announced his plans to transform the innocent soul of Leila with his magic and create a new Bloodstone. With the original Bloodstone that had become Shanna’s engagement ring, added to the three already created from Illyana Rasputin, this final Bloodstone would guarantee Belasco’s triumph. 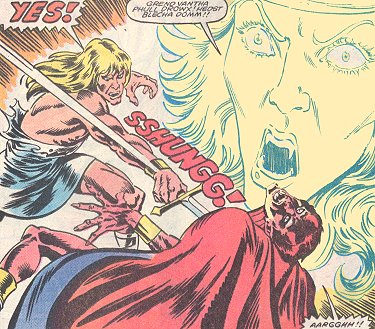 Horrified by what was happening, Queen Leanne managed to return herself to her senses and helped to free the still-transforming Ka-Zar and Leanne. Striking quickly, Ka-Zar attacked Belasco but seemed no match, until he managed to steal the sorcerer’s sword. Seeing the mighty Belasco cowering in fear from the weapon, Ka-Zar made two realizations. The first was the Belasco never used his right arm, because it didn’t exist. The second was that the sword he held was what severed that limb. With the realization that this sword was the one weapon that could end the threat of the sorcerer, Ka-Zar plunged its tip into the chest of Belasco. Mortally wounded, Belasco screamed in agony and faded away, followed by the disappearance of the blade that had wounded him.