Part 6 – Disciple of Darkness and Doom

Like Ororo, Cat took it upon herself to teach the now seven year-old Illyana in the ways of the sword and physical defense. All of this led up to Cat’s plan to return to Earth. Two years later, when she felt Illyana had achieved enough, Cat took her back to Belasco’s citadel. By phasing through the fortress, Cat and Illyana were able to make it to an outdoor altar on a terrace. There, where the dimensional barriers separating Limbo from Earth were the thinnest, was where Belasco would eventually cast his spell. Once again using her phasing powers, Cat tried to take herself and Illyana through the dimensional barrier, as though she would through any wall. Unfortunately, Cat’s plan had not gone unnoticed by Belasco, who dragged the pair back through the dimensional divide and back to his lair. 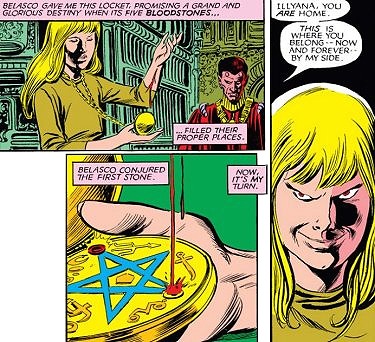 With the two at his mercy, Belasco sadistically completed Cat’s transformation into a feline form, completely eliminating her former, human personality. Turning to Illyana, he produced a large blade, which she used to slit her own wrist. The blood from the gash dripped down into her locket, solidifying as the second of Belasco’s needed five Bloodstones. Elsewhere in her garden, Ororo cursed at the events.

Over the next few years, Belasco trained Illyana in the dark arts of sorcery. Becoming the perfect disciple for the sorcerer, the more she learned, the darker and more corrupt Illyana became. Determined to end Illyana’s corruption, Ororo broke into Belasco’s citadel, breaching its walls with a powerful storm, the likes of which she hadn’t conjured in years. Still, the attack proved useless and Belasco withstood it easily. However, instead of dealing the mortal blow to his former disciple and long-time foe, Belasco’s servant, Cat, struck Ororo from behind, laying her low. Finally realizing, after all of these years, that Ororo had been trying to save her soul from Belasco, Illyana attacked Cat, snapping her neck.

Irate at this act of betrayal, Belasco once again tried to assert his control over his latest apprentice and instructed her to take a blade and sacrifice Ororo’s soul to the Elder Gods, creating the third Bloodstone. 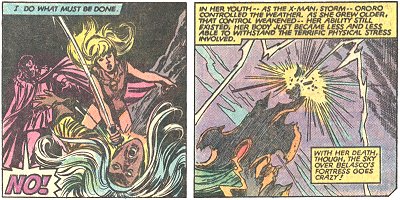 Belasco’s words were in vain, however, as Illyana had returned to her senses. Seeing no alternative, she plunged her blade into Ororo’s heart, killing her and releasing her spirit, instead of transforming it into a Bloodstone. As if in response to the former weather-witch’s death, lightening and winds rocked Belasco’s citadel, shattering the tower and crushing many of the demonic inhabitants. Belasco became incensed and attempted to take out his wrath on Illyana.

However, the young girl managed to escape by way of her teleportation stepping circles, an aspect of her mutant power that she had been experimenting in secret, away from Belasco’s prying eyes. Still, Illyana could not escape for long. Capturing her quickly, Belasco took another part of Illyana’s soul, transforming it into the third Bloodstone. Still angry at her betrayal, however, Belasco left the tortured and exhausted girl in the wastelands of Limbo, even deigning to take the locket she had worn around her neck for years.

While Illyana attempted to recover and survive in the desolation of Limbo, Belasco turned his attention to other pawns in his game. Directing his attention back to the Savage Land, Belasco began to affect the land of his old nemesis, Ka-Zar. Crafting an intricate plot to fool the jungle lord and his mate into helping him, Belasco was amused at the idea that they who had played a part in his resurrection would also play a part in his ultimate triumph.

For the inhabitants of Pangea, they were living in strange times. Unpredictable weather manifested and rocked the valley, accompanied by earthquakes. Even the electricity that powered the heaters that kept the valley warm failed intermittently, 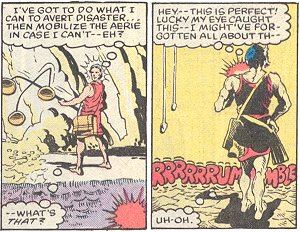 causing the various peoples to worry about their future. To make matters worse, the great volcano of Mt. Flavius began to smoke, sending portents of an eruption to occur. To investigate the possibility of an eruption, Ka-Zar’s comrade, Dherk, decided to investigate. As a humanoid android created by the ancient Atlanteans to oversee the mechanisms of the valley, Dherk alone could determine what the rumblings of the volcano meant. During his analysis, Dherk came upon a stone in the caverns of the volcano. Knowing that Ka-Zar was intending to propose marriage to his lover, Shanna, and needed a ring, Dherk picked it up, intending to fashion it into an engagement ring as a present.

As this transpired, Belasco also turned his attention to the renegade Aerian scientist named Sep, who had become obsessed with reviving the comatose queen of Zarhan, Leanne. Sep had been trying for weeks to use Atlantean medicine to heal his lost love, to no avail. Revealing himself only as a dark voice emerging from the shadows, Belasco contacted Sep and promised to provide the energy needed to power the Atlantean healing machines. He only asked in return that the revived Leanne would perform a task for him and that Sep would wait in the lab while the assignment was completed. Despite the evil dripping from the spectral voice, Sep agreed.

As everything seemed to be moving in his favor, toward his ultimate goal, Belasco gloated in his citadel. However, while his attention had been drawn to Ka-Zar and the Savage Land, he had not witnessed the recent trials of Illyana Rasputin. The former disciple had not only survived the wastelands of Limbo but had grown stronger. Using the residual energy that she had obtained from Ororo’s mighty oak, combined with her own strength, Illyana had managed to forge the Soulsword, the very weapon that Belasco had warned Margali Szardos would never be hers, so long ago. 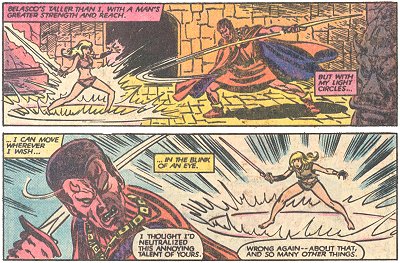 Using her power of teleportation, Illyana traveled to Belasco’s inner sanctum at the speed of thought. Using the combined talents and abilities of her mutant power, her knowledge of sorcery and her newfound Soulsword, Illyana made short work of Belasco’s servant, S’ym, and turned her attention to Belasco himself. Attempting to defend himself against the frenzied attack of his former disciple, Belasco found his own power waning, as Illyana’s grew. Belasco’s crimson skin began to return to its pre-demon hue and his tail disappeared, followed by his horns. At the same time, those same traits went to Illyana, who became, at last, the Darkchylde Belasco had so desired.

Belasco was saved from destruction, however, as Illyana remembered the battle of sorcery Ororo had fought with Belasco so long ago, which led to her own corruption. Not wishing the same fate to befall her, she spared Belasco, choosing to not kill the now very mortal sorcerer.

Irate beyond belief, Belasco nevertheless realized his vulnerability and teleported himself away, apparently still possessing much of his magical might. After Belasco’s departure, Illyana left used her newfound mutant mastery of stepping discs to return home. Despite her departure, however, Illyana remained the new master of Limbo. While far from powerless, Belasco had lost that position.