There is little way of knowing how many other times Belasco might have influenced events during this time. With the ability to reach through time, even during the time he was still frozen in Pangea, Belasco’s dark influence could have touched untold numbers. Whatever he did do, however, only seemed to be a precursor or stepping stone to his final plan, which included the young girl named Illyana Rasputin.

In one of his attempts at world domination, the mutant supremacist known as Magneto had raised an ancient city from the ocean floor in the Bermuda Triangle. After Magneto’s defeat by the mutant team called the X-Men, ownership of the island fell to the outlaw team’s hands. Shortly thereafter, the team began the process of exploration, attempting to figure out who or what ancient, extinct people had created it. As they explored, the X-Men were unaware that they were being watched through the scrying pool of Belasco. To this day, it is unclear what the origins of the city are or if Belasco had any hand it its creation or destruction. Nonetheless, Belasco became interested in its new inhabitants, and one of them in particular.

The strongman of the team, the metallic Colossus, was being visited by his young six year-old sister, Illyana. Much like Maire five hundred years ago, Belasco became fascinated with the young girl and saw her innocence and potential in completing the spell he began so long ago. Calling out to the little girl, Belasco told Illyana to follow his voice and she would be led into paradise. As the rest of the team was in the middle of training, most of the X-Men did not notice as the six year-old walked into the labyrinth. Unlike her teammates, Kitty Pryde noticed and chased after the young girl. Despite being half her age, Illyana managed to keep ahead of Kitty and even disappeared. Still in chase, Kitty walked into the shadows and found herself teleported away on a stepping disc of light.

Still hot on Illyana’s trail, Kitty found her way into the courtroom of Belasco, who already held Illyana under his thrall. Introducing himself, Belasco quickly captured Kitty and placed her inside a crystal that nullified her powers, preventing her escape. Topping this, Belasco used a second spell to remove Kitty’s skeleton, preventing her from being freed and escaping. 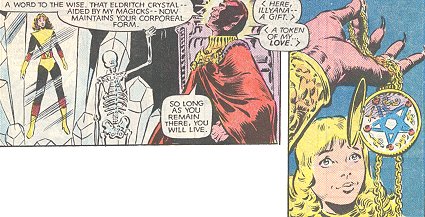 Horrified, Kitty was trapped within the crystal as her skeleton hung in the air before her. Turning his attention to Illyana, Belasco offered a trinket: a locket containing a pentagram, in which’s points were grooves where small stone might fit. Clearly, Belasco meant to resume his spell.

Much of what happened in the next few minutes and, actually, in the next few decades is a little unclear. The events that transpired have only been viewed through the prism of a secondary timeline, which supplanted the first. The following, however, is known for sure. The X-Men managed to catch up with Illyana and Kitty and engaged Belasco. Caught unprepared, the dark sorcerer fled further into his citadel, his prize seemingly lost. Wishing to save their youthful charge, the X-Men sent Illyana home, though one of the luminous stepping discs. They decided, however, to not return for the moment. Instead, the meant to hunt down Belasco and make him pay. As a result of this decision, Illyana managed to return home but the X-Men became stuck in Limbo forever.

It is unclear how long the X-Men remained in Limbo, however, it was long enough for Colossus to grow old. 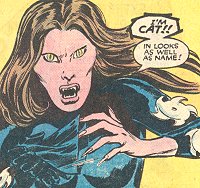 During these decades, Belasco’s demon servant, S’ym, killed both Wolverine and Colossus. Wolverine’s flesh was left to rot, leaving his adamantium skeleton lying in the corridors. Colossus’ chest was caved in and his inert metal body was hung upon the wall on the same spot, left to hang for eternity. Presumably, Nightcrawler resisted as well. However, in time he became the faithful servant of Belasco, who darkened Nightcrawler’s inner soul into a mirror of his outward form: demonic and cruel. Having been imprisoned in the crystal, Kitty Pryde would have been unable to resist. It was presumably directly from this state that Belasco transformed Kitty into a form that mocked her name.

It had been known for some time that Ororo had possessed magic in her blood. It was a part of her heritage for generations, but not used. Having lost his prize, Illyana, Belasco seemed interested in using this side of Ororo’s heritage toward his goals. As her elemental powers began to wane, Belasco began to teach Ororo the art of sorcery. Presumably, this was more of a result of his coercion than her allowance. 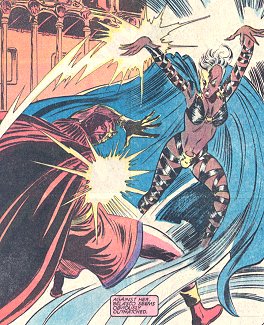 As time passed, Ororo gained in power and skill. Eventually, convinced that she was powerful enough, Ororo turned on Belasco, attacking him with her combined powers of sorcery and elemental control. Belasco reeled from the attack and fell to the floor. Having suffered for too long at the dark lord’s hands, Ororo went against her oldest belief and delivered the killing blow, murdering Belasco. In doing so, however, she utterly failed. Ororo had forgotten that Belasco had been given immortality by the Elder Gods and any death would be fleeting. Ororo herself, however, had perverted her very soul, becoming as cruel and dark as the man whom she had tried to slay. Once more alive, Belasco commanded his servant to bow before him, as she was now seemingly in his thrall forever.

Overconfidence, however, remained one of Belasco’s weaknesses. Convinced of Ororo’s perversion of her soul, Belasco continued Ororo’s training and allowed her to have a section of Limbo of her own to remake. Over the years that followed, Ororo would try to regain the lost bit of her soul by creating a garden, which she called her Oasis of Life. She formed her new sanctuary by creating a single acorn, a thing of beauty and nature, and allowing it to grow naturally into a gigantic tree over the years. As it grew, so did her sanctuary.

Time may have passed in Limbo, but the relativistic properties of time in that dimension gave Belasco a second chance at the young Illyana Rasputin. After several apparent decades had passed for Belasco and the three surviving X-Men, the young Illyana Rasputin once again wandered into Limbo, followed by Kitty Pryde and, subsequently, the uncanny X-Men. This time around, Belasco’s servant, Nightcrawler, helped in the capture of Kitty Pryde, who was horrified at the skeletal remains of her teammate, Wolverine. Like before, Belasco reveled at the capture of Illyana, who he once again offered the pentagram embossed locket, hoping to begin the spell of his gods’ release once again.

Unlike last time, however, the X-Men had aid. Left alone, Ororo, now an old woman, saw her past self and her teammates of so long ago. Using her magic, Ororo helped Colossus and Wolverine make their way to Belasco’s chamber. Elsewhere, the Nightcrawler of the “present“ confronted his “future,“ demonic self and defeated him. Taking his clothes (what little there were), Nightcrawler found his way to Belasco’s chamber and passed himself off as the sorcerer’s faithful servant. With the arrival of Colossus and Wolverine, followed by the youthful, elemental Storm, Nightcrawler revealed his true identity and struck against Belasco. Outnumbered and overpowered, Belasco fled.

As they had done in the previous timeline, the X-Men decided to follow Belasco until they were halted by a familiar voice. The aged Ororo appeared from the shadows and told them that it had been the same decision her X-Men had made long ago, which had led to tragedy. Using her magic, Ororo reunited Kitty’s skeleton with her body and freed her from the crystal. She then bid the X-Men return through the mystic gate leading to their isle, which she would close behind them.

As the X-Men prepared to leave, however, Belasco returned, accompanied by S’ym and a host of demons. He clearly planned to use this opportunity to follow the X-Men through the gate and into their reality. Promised by the elder Ororo that it was the best decision, the X-Men departed. Crafty as ever, Belasco managed to slip by Ororo and grab the young Illyana. He was bound to not lose her a second time.

Through this dimension-spanning tug-of-war, Belasco and Kitty struggled for possession of Illyana. In the end, however, Kitty lost her grip on the little girl, allowing Belasco to pull her back through the portal and into Limbo. With the portal to Earth now closed, Belasco had triumphed. Decades ago, he had lost the little girl while the X-Men remained. This time, the cursed mutants were gone and the prize was his. 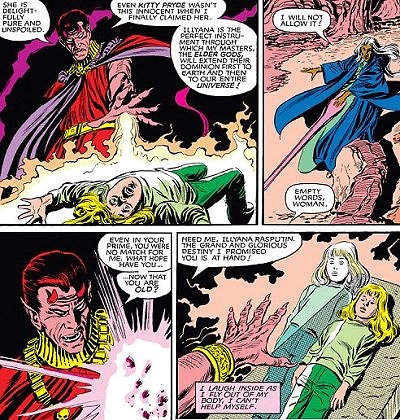 Wasting no time, Belasco took the young Illyana to the altar and placed her upon it. With eldritch magic, he reached into her soul and removed a part of it, commanding it to float in the air before him. Looking on in horror, Ororo tried her best to stop the dark sorcerer, but even in her prime she had been no match for him. Stroking the chin of the Illyana’s phantom reflection, Belasco caused it to grow in age, even as it grew in darkness. Laughing all the way, Belasco transformed Illyana’s innocence, until it matched his own, dark soul. The process complete, Belasco transformed the simulacrum of Illyana into a ball of energy, which then became a Bloodstone. Taking this first of the five Bloodstones, Belasco carefully placed it inside the pentagram embossed locket.

This task completed, Belasco turned his attention back to Ororo, intending to end her threat forever. It was only by the timely intervention of Cat that Ororo managed to avoid Belasco’s wrath. 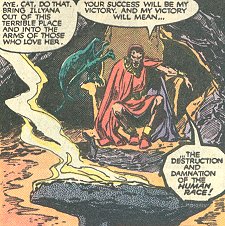 Still, while he must have been more than a match for the pair, Belasco did something most curious: he left, fading away in teleportation. In truth, Belasco had no more immediate need of Illyana and decided to allow Ororo and Cat to take her away. The two spirited the youth away to Ororo’s garden, where, over the course of a year, the sorceress began to teach the young girl the ways of magic. Concerned that such an education could only lead to the perversion of the girl’s soul, Cat snuck into the garden at night and led the young girl away. As all of this transpired, the three were completely unaware that their unfolding drama was eagerly watched by Belasco.