Part 3 – Limbo: A prison between heaven and hell and everything else 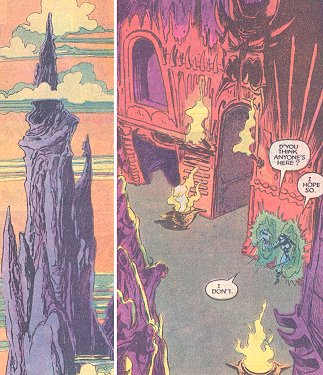 Unfortunately, Belasco was neither dead nor his threat ended. Instead of killing their faithful yet inept servant, the Elder Gods had imprisoned Belasco in a dimension outside space and time. For the most part it lacked a name, but, while some grew to call it other Otherplace, many chose to call it Limbo, evoking an image of a place between heaven and hell. One of the features of this realm was that whomever ruled it could reshape it in their image as they desired. Belasco seemed to waste no time doing so, twisting the landscape into deserts and hellish wastelands. In one of the realm’s deserts, Belasco created a mountaintop citadel, high in the clouds. In the citadel itself, Belasco filled libraries with grimoires and other tomes dedicated to the dark arts. Here he would refine his powers and grow in strength.

It is unclear what was in Limbo prior to Belasco’s arrival (or if there had even been a place prior to this) or if it had been inhabited. However, after Belasco’s arrival, the pocket dimension was inhabited by an untold number of demons, the greatest of whom was S’ym. As powerful as he was, S’ym was very much under the command of Belasco. Despite this fealty, S’ym was hardly loyal to his master and plotted for the day that he might take control of the dimension. Throughout his control of Limbo, Belasco would be sure to keep S’ym on a very short leash.

With the stage set, his power base re-established, Belasco continued his quest for power. While his exile to Limbo had been a form of imprisonment by the Elder Gods, the imprisonment had not just been for punishment. The Elder Gods had wished for the sorcerer to redeem himself, at least in part, by freeing himself from this dimensional prison. From this place outside of time and space, Belasco was able to plot his escape outside the confines of time. In this manner was he able to affect events that took place during his seven centuries imprisonment in the Savage Land.

One such attempt was with a young girl named Maire O’Connell. Some five hundred years ago, Belasco managed to abduct this girl, who was in her teens, and bring her to his citadel in Limbo. There, he trained her as an apprentice and disciple. To this young girl, he gave a locket similar in appearance to the one he fashioned for Beatrice. Clearly, he intended to begin anew the same spell he began in the 13th century.

Despite his intentions, the young Maire became arrogant in her new powers. To cure the young girl of this, Belasco reached into her soul and gave her her heart’s desire: to become immortal. Still, this did not seem to be enough. In order to assure that his apprentice from ever trying to overthrow him, Belasco stripped Maire of her magic and cast her out of Limbo. Nearly powerless though immortal, Maire would grow to curse her immortality and would wish for a way to be released from her condition. She would have to wait for five hundred years before another apprentice of Belasco’s could help her. [Marvel Super-Heroes (2nd series) #1]

Belasco also kept an eye out for those that would eventually meddle in his plans. For centuries, the women of one family had taught their daughters a powerful mystical discipline known as the Winding Way. The ending of this line would be a woman to wield a powerful, yet evil, weapon called the Soulsword. One such woman in this line of sorceresses was Margali Szardos, who was a mystic in a traveling circus in Germany. When her daughter, Jimaine, planned to leave her mother’s side to go with her lover, Kurt Wagner, who would later be known as Nightcrawler, Margali summoned the image of the Soulsword, declaring that it was part of her daughter’s destiny, one that she could not avoid. 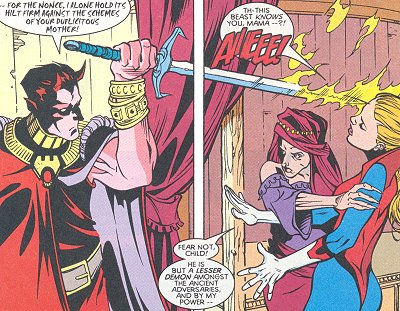 Transfixed by this beautiful visage, Jimaine approached the image, only to see a demonic hand arise from the pentagram that created it. Clad in his dark, red robes, Belasco introduced himself and declared that the sword was not for the likes of them, but for someone else. Intending to use the sword in the meantime, Belasco started to strike at Jimaine and end her threat then and there. Before he could do so, however, Margali managed to end the spell that summoned him, returning the sorcerer to Limbo.

Still not convinced, Jimaine remained resolute in leaving. Becoming desperate, Margali cast another spell, reshaping her image to that of Belasco’s. In this form, Margali confronted her daughter, mocking her decision as causing a quicker rise of his power and eventual possession of the Soulsword. To seal her daughter’s fears, “Belasco” killed the trapeze artist who was to take Jimaine’s place in the show. Believing that actually she was meant to be killed by the “demon,“ Jimaine decided to stay with her mother and hone her magical skills. [Excalibur #minus 1]