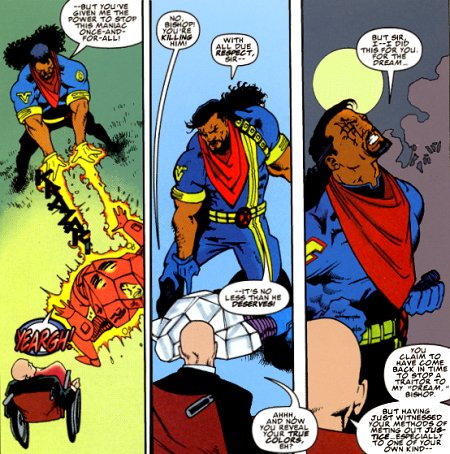 After arriving in the present, Bishop’s violent attitude caused several problems, but eventually the X-Men could convince him of their ways. However, in the reality shown in What if #minus 1, Bishop and Trevor Fitzroy arrived about 10-15 years earlier, before the X-Men had been formed. Fitzroy approached Charles Xavier and told him what the future had in store from anti-mutant hysteria, Sentinels, and eventually the mockery of his dream, in the form of the X.S.E. a hundred years later. Xavier was shocked by all this, but still gave Bishop the benefit of doubt. However, when the man attacked the green-haired opponent, intending to kill him, Xavier was fully convinced. While Bishop was sent to a high-security prison, the Professor decided against founding the X-Men in order to ensure that such a dark future would never happen.

One possible future showed The End of the X-Men at the hands of a coalition of their most powerful enemies, from Earth and beyond. A key player in this interstellar drama was Aliyah, the 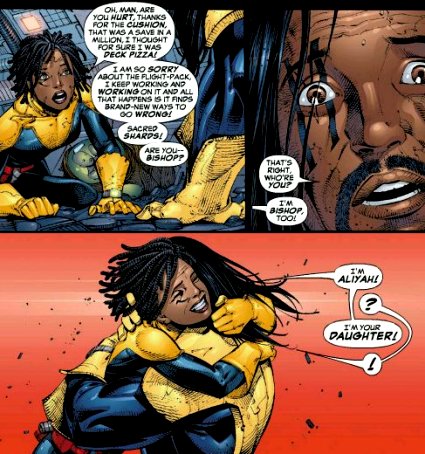 daughter of the Shi'ar princess Deathbird and Bishop. Bishop was unaware of the girl's existence until she was a teenager and traveled to Earth to aid the X-Men against their foes within the Shi'ar Empire. Bishop was thrilled to meet Aliyah but their reunion unfortunately occurred in the middle of a major crisis for the X-Men - one that not all of them X-Men survived. Aliyah proved a huge asset in the conflict and when the dust settled, she was the sole remaining heir to the Shi'ar throne. She ascended to the position of Majestrix and Bishop joined her as Royal Consul. 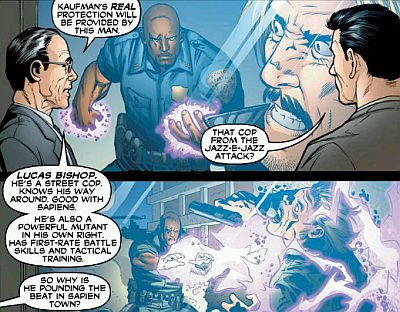 During the House of M, Lucas Bishop was a patrol officer with the NYPD working in Sapien Town. After successfully stopping a terrorist bombing at the Jazz E. Jazz concert, he was hand-picked by the X.S.E. to assist in the protection of Shaky Kaufman against death threats by the Sapien League. He was teamed with the X.S.E.’s best human agent, Ismael Ortega. In their hunt for the Sapien League, Ortega was targeted as a race traitor and targeted for assassination. When the assassin struck at his daughter’s awakening ceremony, Bishop was able to protect Ismael but not his daughter Chamayra. She was shot down by the killer moments before the House of M reality reversed itself. 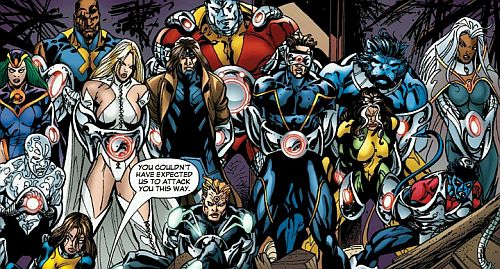 In the future timeline referred to as Days of Future Now, Bishop was one of the active X-Men members who met their demise in a Sentinel attack on the X-Mansion. This attack was coordinated by Weapon X director Malcolm Colcord who teamed with Mesmero and Sauron to bring down the X-Men. Using their combined hypnotic powers, Colcord seized control of Professor X's mind using his telepathic prowess to render the X-Men powerless. Colcord finally got his revenge on Wolverine by wiping out the X-Men utterly.

In the Ultimate Universe, Bishop was first seen on a computer screen, as a possible candidate for a government-approved team of mutants. Through unrevealed circumstances, Bishop was imprisoned. A short time later, a future version of Bishop entered the lives of the X-Men, claiming he had come to prevent the murder of Professor X by his teammate, Cable (a future version of Wolverine, not Nathan Summers). Bishop assisted the X-Men in a battle against his former teammates, however Xavier was assassinated. Bishop visited the prison where his present self was being kept and offered him some stern advice, telling him not to use his powers. The time-traveling Bishop tried to join the X-Men, but the team was disbanded in the wake of Xavier's death and he was told that if he wanted X-Men to make his own. So that is exactly what he did, recruiting former X-Men and associates and forming them into a strike force based in Australia.

Bishop led these New X-Men in a series of battles against Sentinels financed by the criminal organization Fenris. During one such battle, Psylocke was in danger, and Bishop revealed that she was his wife - explaining that at some point his present self and Psylocke had wed. To complicate matters, it was revealed that Cable and Bishop had planned Bishop's intrusion into the X-Men's lives and that Xavier was not dead. After faking his demise, Prof. X had been taken into the future so that the X-Men could be restructured and better trained for the impending threat posed by Apocalypse. After this revelation, Wolverine killed the future Bishop when he failed to prevent the death of Angel at Sinister's hands. Ironically, Sinister was subsequently transformed into Apocalypse, the very threat that had inspired Bishop's journey into the past.