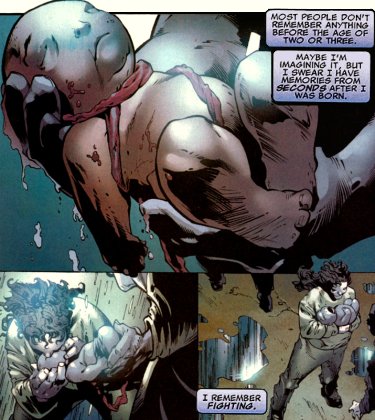 In the timeline of Earth-1191, approximately 50 years into the future, Burnum and Kadee Bishop were living in Alice Springs, Australia when they received word of a tactical nuclear strike aimed right at their region. Kadee was already pregnant with their first child when they escaped the bombs, heading for sanctuary in America. They landed in Sheepshead Bay, New York, and were almost immediately targeted by Sentinels watching for mutant immigrants. As part of the Americans’ No Tolerance policy for mutants, they were tried and found guilty of carrying the X-Gene and sentenced to life in the Sheepshead Bay internment camp. Living conditions in the camps were atrocious, and Kadee was forced to give birth on the street, in the rain, several months later. She and the child, named Lucas Bishop, barely survived the delivery.

Psychologically, Kadee fared poorly with internment, and retreated into her own bitterness over time. It was Burnum who cared for Lucas most of his early childhood, and later for his sister Shard, who was born three years later. Burnum tried to teach his son about his ancestry – the Aboriginal people and the ways of the dreamtime – but didn’t know enough to fully pass on the knowledge to Lucas. [X-Men: The Times and Life of Lucas Bishop #1, X-Treme X-Men (1st series) #4]

Around the same time, Lucas’ grandmother came to live with them in the camp, having transferred from another facility. She was the first to tell Lucas stories about the mighty X-Men, hero mutants from a generation past who fought on behalf of humans and mutants. Despite his strong family bonds, Lucas was still forced to deal with the harsh realities of the camps every day. By the time he turned five, the humans began to experiment with branding their mutant prisoners with a large ‘M’ over their eyes. Kadee Bishop was horrifically scarred as they tried to “perfect” the process. Lucas fought during the process, and tried to protect his sister from the pain, but the fury of a child was no match for the guards. 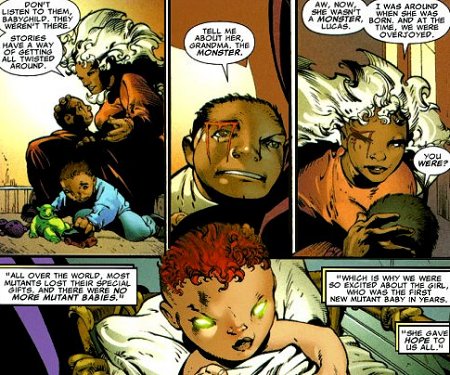 It was after the brandings that Lucas first heard stories about the monster called Hope. He asked his grandmother about the monster and she tried to correct the tall tales about Hope. She told him about the Witch who robbed most mutants of their powers and how the birth of Hope meant that mutantkind would continue. Without Hope, she said, he and his parents and sister wouldn’t have been born. [X-Men: The Times and Life of Lucas Bishop #1]

Despite his grandmother’s rosy-eyed view of the past, Lucas began to grow bitter like his mother as he grew older. He heard the stories of how the so-called Messiah grew up to kill a million humans, which in turn led to the sad state of life for mutantkind. Lucas began to feel that his family may have been better off if they had never been born, if the monster Hope had never brought mutants back to begin with. Lucas met his first time-travelers around this point, although he didn’t know it at the time. Jamie Madrox and Layla Miller were mutants from decades in the past, just at the point in history when Hope was born. They tried talking to him about what happened to turn humanity against mutants, but he dismissed what they said thinking they were nothing more than “Destiny freaks” – mutants who thought they were special, the next wave of evolutionary development, a laughable proposition from Bishop's perspective. [Uncanny X-Men (1st series) #494, X-Factor (3rd series) #27]

Not long after he met Jamie and Layla, the Summers Rebellion began as humans and mutants alike took to the streets to challenge the Sentinels, the internment camps, and the government 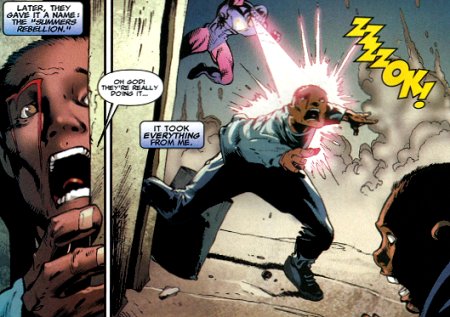 that supported them. When the chaos struck Sheepshead Bay, Bishop saw both of his parents killed before his eyes by the Sentinels. He couldn’t find Shard or his grandmother during the rioting, and fled into Manhattan when he saw an opening in the fences. Bishop found he needed to steal to eat and, as luck would have it, he crossed paths with the perfect mentor: LeBeau, the Witness to the X-Men’s final days. [X-Men: The Times and Life of Lucas Bishop #1, X-Men (2nd series) #8] 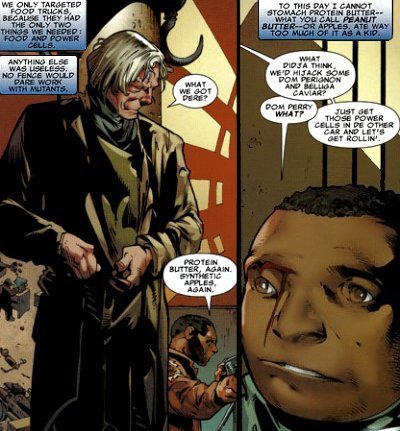 For the next several years, Lucas apprenticed with the Witness as a thief, criss-crossing what was left of America as the Summers Rebellion re-wrote the landscape. By the time he was ten years old, Bishop had become very good at their trade and graduated from "snatch-and-grabs" to heisting entire food trucks under LeBeau’s care and direction. When it started to become clear that the elderly Witness needed Lucas more than the other way around, LeBeau started regaling the boy with stories about his time with the X-Men. He told Lucas his version of the Hope story and how the Son of the Askani protected her until it was too late to stop her. Eventually, LeBeau just vanished, leaving Bishop on his own again.

Later, Lucas was reunited with his sister, Shard, and their grandmother in Las Vegas, Nevada. After the Summers Rebellion, the Lion’s Den ghetto of Las Vegas was the last remaining camp in the United States. More of an unofficial reservation for mutants, they received meager food and education from the government due to public pressure, and were technically free to come and go as they pleased. Soon, however, during the so-called Emancipation, the new government “freed” the mutant population. In practice this meant their government benefits were rescinded, and the mutants were kicked out onto the streets with nowhere to live, and few people willing to help. [X-Men: The Times and Life of Lucas Bishop #2, Uncanny X-Men Annual ‘96] 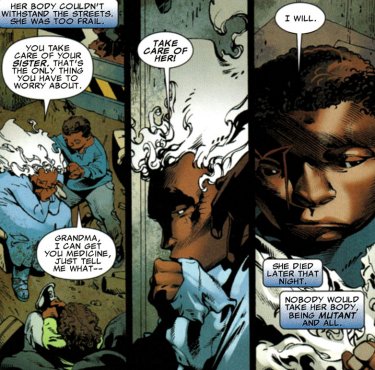 Bishop and Shard became homeless, living on the streets with their grandmother and her friend, Hancock. It was a hard life and, almost a year after they were released from the camp, Bishop and Shard's grandmother died. On her deathbed, she made Bishop promise to look after his younger sister.

As street kids, Lucas and Shard began to steal, using the tricks Bishop learned from LeBeau to survive. The kids initially praised a group of mutants known as the Exhumes, a radical anti-human group, who frequently were hounded by the X.S.E., a mutant militia. The Xavier Student Enforcers were created by the remnants of the Summers Rebellion generals. It was a compromise with their human allies, letting mutants have the responsibility of policing their own, but many mutants just saw the X.S.E. as a new form of human-loving Hounds. One day, Trace and Sureshot of the X.S.E. were tracking down an Exhume named Virago, who grabbed Shard to use as a hostage. Bishop jumped on her back, forcing her to drop Shard, and Sureshot blasted her through the chest. At this moment, Bishop decided that, when he grew up, he wanted to be an X.S.E. officer. [X.S.E. #1]

One day, a gang leader named Billiboy and his enforcer, Halftrack, attacked Bishop, Shard and Hancock in retribution for their dealings with a rival gang. Hancock struck out at Billiboy but Halftrack, in turn, killed him before Bishop's eyes. Enraged, Bishop used his mutant gift for the first time, unleashing a burst of kinetic energy that leveled both attackers. Then, two X.S.E. officers named Recoil and Amazon appeared and finished the job. They told Bishop that they thought he had a place in the X.S.E., asking him to join. He agreed but only if Shard could come along. [Bishop #3]

The siblings joined the X.S.E.'s junior recruits under the tutelage of Hecat'e. As the commanding officer at the training academy, Hecat'e related the creation of the X.S.E. after the Summers 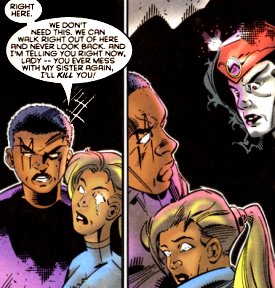 Rebellion to the cadets. With the residual feelings of distrust rising back up, sparking to life such radical groups as the Exhumes, there was a need to patrol mutants, so Hecat'e and the others set up the X.S.E., mutants policing mutants for the good of all. After the initial meeting, Hecat'e met with Bishop and Shard, offering her condolences over the death of her old friend Hancock. Shard then rudely asked why she hadn't helped him off the street then, so Hecat'e surrounded them in her null-light field. Bishop got to Shard and faced down Hecat'e's power without flinching, impressing her. While leaving, Bishop encountered another young recruit named Trevor Fitzroy, who could drain lifeforce to open teleportation portals. The two became instant enemies. 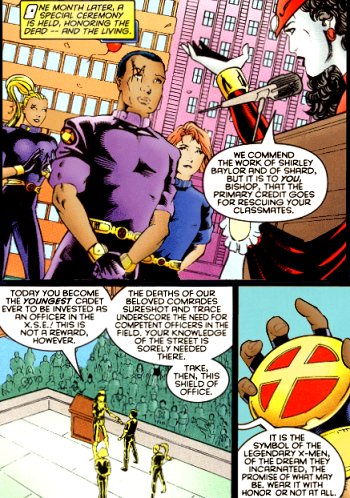 After their first year in the academy, Bishop, Shard and the rest of the cadets went out on their first scanning patrol with Trace and Sureshot. On the patrol, they were attacked by a pack of Emplates, a group of mutants consigned to draining marrow from other mutants. Trace got out an SOS before both he and Sureshot were disposed of. One Emplate grabbed Shard and began to drain her life away. However, Shard chose that moment to manifest her mutant ability to convert light into concussive discharges, simultaneously blasting the Emplate and charging up Bishop, who took out another Emplate. Together, Bishop and the group's best sharpshooter, Shirley Baylor, held off the Emplates until the X.S.E.'s back-up force arrived. Soon, at a ceremony in their honor, Bishop was invited into the X.S.E. as the youngest cadet ever to become an officer, until Shard beat his record a year later. [X.S.E. #1-2]