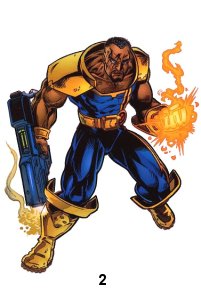 1) This is the standard X.S.E. uniform (Xavier Security Enforcers) that Bishop wore as high ranking officer and commander of his own squad. He continued to wear it after he accidentally came to the present and joined the X-Men. [Uncanny X-Men (1st series) #282]

2) It was only shortly after the Age of Apocalypse that Bishop drastically changed his look, sporting a new hairstyle and costume. This costume was largely similar to his previous one, with new yellow boots and gloves while discarding his scarf. He wore a yellow collar and epaulets over his new sleeveless shirt. [X-Men (2nd series) #49]

3) For a time, the X-Men were abducted to space to help battle an alien invasion. They had nothing to wear but some Shi’ar mining suits and other uniforms. Some of these suits demonstrated unique capabilities, but any exact features of the suit Bishop wore are unknown. [Uncanny X-Men (1st series) #342] 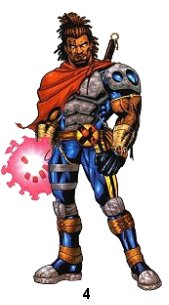 4) Over the long months trapped in space, Bishop’s hair grew out and he wore it as dreadlocks. Shortly after his return to Earth, he was abducted into a future timeline. His costume torn, he had to use what little equipment was there and came up with this makeshift creation. [Bishop – The Last X-Man #2]

5) After the X-Treme X-Men left the mansion, they came up with a set of new costumes, mainly in red and black. Like the rest of his team, Bishop has a special set of sunglasses with integrated technological properties (contacting each other, scanning, etc) and additionally he carried a pair of plasma blasters through which he could channel his personal energies. [X-Treme X-Men (1st series) #1]

6) Eventually, the X-Treme X-Men changed to costumes that were more like civilian clothing Bishop wore an outift similar to Sage's whom he tended to work together with: a sleeveless black leathersuit with shoulder pads, black short gloves and knee-high red boots. He sometimes wore a black leatherjacket on top of that. [X-Treme X-Men (1st series) #41]

7) Bishop adopted a new costume resembling his original X.S.E. uniform. It was primarily a blue bodysuit with an open lapel collar at the neck and sleeves that rolled up at the forearms. Two red stripes extended from his left shoulder down the front of his chest to the top of his boot, with a large yellow ‘X’ overlapping them on his left breast. He also wore yellow gloves, a red undershirt and yellow holsters for his handguns under each arm. [Uncanny X-Men (1st series) #444] 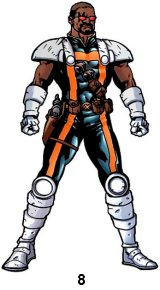 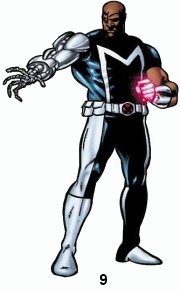 8) After the Decimation, Bishop took on a new uniform. He now wore a sleeveless blue bodysuit, with an orange stripe extending up each leg and then crossing over his chest to connect with each other. Over time, this stripe began to dip in the center, turning into a large letter ‘M’ across his chest. This suit also included a red ‘X’ buckle on his belt and over his left breast, as well as a bandolier crossing his front with a series of pouches or grenades. [Uncanny X-Men (1st series) #469]

9) During his hunt for Hope, Bishop modified his costume slightly. The suit became midnight blue with the white ‘M’ prominently displayed on his chest. He had white stripes running down the outside of his legs, an ‘X’ belt and any number of straps and holsters to hold his supplies. His right arm was now missing, replaced with a bionic appendage stolen from Forge. [Cable (2nd series) #1]

10) During his time in the 68th century, Bishop adopted the raiments of the Order. This orange and black outfit included a half poncho and facial scarf for protection against the elements in the harsh, post-apocalyptic future. Beneath the poncho, Bishop wore a large orange 'X' on his shirt as a reminder of his history. [Uncanny X-Force (2nd series) #1] 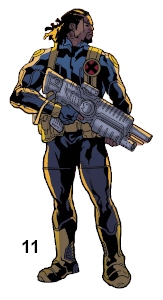 11) After returning to the X-Men, Bishop adopted a slightly new costume which amounted to a long-sleeved version of his original X.S.E. uniform. The gold stripe down the left side of the costume was now a solid line. His 'X' insignia badge was moved from his belt to his left breast, closer to the version he wore with Storm's X.S.E. [Astonishing X-Men (4th series) #1]

12) Lucas was hesitant to embrace his role as Red Bishop of Hellfire Trading, but he slowly started adapting his wardrobe to reflect his new colors. [Marauders #9-10]