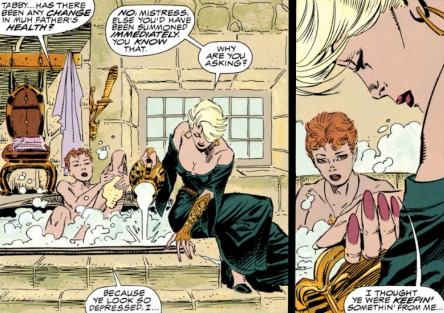 Located in some other dimension, Geshem is some sort of medieval place with lots of magic involved. The land is ruled by Queen Rain, a counterpart of Wolfsbane, and that dimension’s Tabitha is her most loyal and trusted maid. Rain confided in Tabitha with her deepest secrets - quite an interesting twist, considering that, in the main reality, the two girls were rivals for their teammate Rictor’s affection. 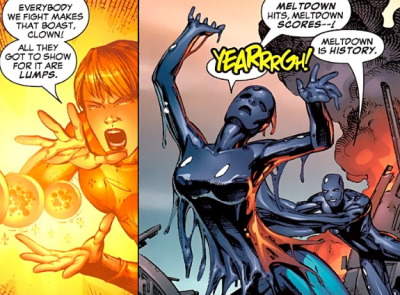 Ten to fifteen years in the future, Meltdown was once again a member of X-Force along with Warpath, Domino, Shatterstar. Feral and Rictor, when the team met their End. After their aircraft was shot out of the sky, which X-Force barely survived, Meltdown was absorbed by the strange entity called Divinity, who them used Tabitha’s powers against her teammates. Not much later, though, Divinity was killed by Apocalypse while Meltdown was still trapped inside him.

In the reality known as the House of M, Boom-Boom served as a member of the elite FBI team known as the Brotherhood, tasked with taking down renegade Sapien teams. Other members of the team included the Blob, Avalanche, Feral and Thunderbird. Her powers, attitude and general appearance seemed similar to her 616 counterpart, but she did have a large number of piercing on her face and ears, and she did have excessive make-up by way of a star and a heart drawn on her face.

In one realm of Battleworld, designated Earth-24201, Genosha was subject to a deadly mutant extinction plague. Tabby, known as Bombshell, had become a member of the X-Men after she was rescued from Genosha some years before. Unfortunately, her past caught up to her during 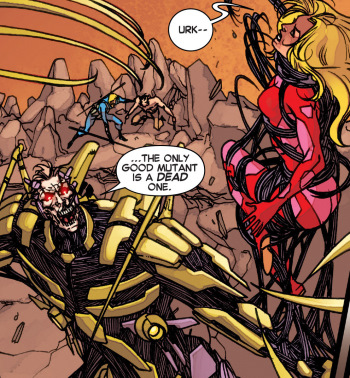 one of the X-Men's famous baseball games when the Genoshan Press Gang, including her ex-boyfriend Rictor, arrived to abduct two members of the X-Men who they thought could assist with curing the mutant plague. Bombshell was knocked out of the battle by Rictor, for her own safety, but was unfortunately caught up in a portal and transported back to Genosha. There, she was held prisoner and discussed with Rictor their previous time on Genosha. While the Press Gang proceeded with their plans to cure the mutant plague, the X-Men launch an assault on Geosha to rescue their captive teammates. Bombshell was later caught up in a battle between the X-Men, Press Gang and a newly resurrected Cameron Hodge. During the battle, Bombshell becomes infected with the Techno-Organic Virus, and was later distraught when Hodge killed Rictor. After the mutants regrouped, a despondent Bombshell agreed to take part in a one-way mission to end Hodge once and for all, by joining Havok as they use their explosive powers to destroy Hodge. Bombshell's sacrifice ended the threat of Cameron Hodge once and for all, and also reunited the X-Men and the mutants of Genosha.

Another realm of Battleworld was an Inferno, designated Earth-91240. In this world, the X-Men never stopped the demonic invasion of Manhattan. Boom-Boom worked as a member of the X-Men, and one year she accompanied Colossus, Domino and Nightcrawler on an annual journey into the heart of the inferno in an attempt to rescue Colossus' sister, Magik. During the mission, Boom-Boom was captured by a demon, before N'astirh seriously wounded her. A troll found Boom-Boom and dragged her beneath the city, to a laboratory. There, Boom-Boom is experimented on by Mr. Sinister, who created a clone army of Boom-Booms. While Colossus and the other X-Men battled the raging “inferno” in which Magik's demonic army spread throughout New York. Boom-Boom returned to the X-Men, assisting them in the battle and offering to lead them to salvation. Unfortunately, this was a trap, as she was still being manipulated by Mr. Sinister. The X-Men discovered the clone army of Boom-Booms and, after breaking free of Sinister's manipulation, Boom-Boom blasted him with a plasma bomb, seemingly killing him. The X-Men dealt with the clone army, and Boom-Boom continued to assist her teammates against Magik and the spreading inferno. 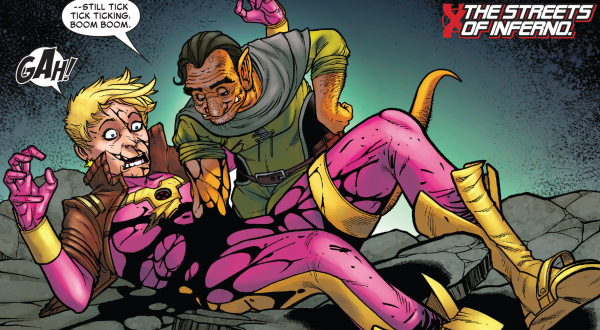