1) While being among the Vanisher’s Fallen Angels and X-Factor’s trainees, Tabitha had no official costume but wore civilian clothes. While she was also seen in some other clothes, most of the time she was wearing purple leggings and a black, oversize blazer with pink lapels. Her trademark wild hair and dark sunglasses completed the look. [X-Factor (1st series) #11]

2) As Boom-Boom and the other X-Terminators fled their boarding school in the middle of the night, they had no clothes to wear, so they all donned new outfits. Tabitha took to wearing green pants, which stopped above the ankles, held up by yellow suspenders onto a strapless pink blouse. She also wore yellow slippers on her feet. [X-Terminators (1st series) #2]

3) After Cable took over the New Mutants, he had the group design team uniforms for themselves. Boom-Boom's was a pink one-piece mini-dress, with a white rectangle design extending up from the bottom-middle. It had an open collar with white trim, and a white and pink 'X' emblazoned on her left breast. She also wore pink boots, gloves, a belt made of golden disks and her trademark sunglasses. Always one for redesigning her attire, Boom-Boom would also occasionally wear a variant costume, still pink but with long sleeves and pants instead of a skirt. [New Mutants (1st series) #90, 93]

4) Later, Boom-Boom would modify her costume more when she joined X-Force. Added to a generic pink shirt and leggings, she wore a red sleeveless vest, short red gloves and boots, a red band around one thigh, a belt with a series of small pouches on it, and of course her sunglasses. Shortly after joining X-Force, she also adopted a set of wrist-launchers to propel her time bombs for her over greater distances. [X-Force (1st series) #1]

5) Following the X-Cutioner's Song, Tabitha used the Shi'ar clothing synthesizer at the mansion to create a new "Boomer" costume for herself. The suit was blindingly hot pink, covering her fully from the neck down. It had neon yellow lines running from underneath her shoulder straight down her legs to a pair of yellow booties. The name BOOMER was written in hot pink on the left leg's line, with a yellow thigh band wrapping around the second 'O' with pink starbursts on it. The yellow body-lines were also shaped to create a starburst pattern around her breasts, and yellow lines down her arms created a half-starburst before ending on her yellow wrist-launchers. Initially, she also wore an orange neckbrace, shoulder pads, and straps and pouches which extended out in a 'T' from the 'X' symbol on her collarbone, down to an orange belt as well. She would later drop these additional armaments in favor of a more streamlined costume. [X-Force (1st series) #19, 38]

6) When Cable moved X-Force back into the X-Mansion, he also designed new team uniforms for them. Boomer's was a sleeveless purple body stocking, with a sleeveless orange vest worn over it. She also wore orange and yellow kneehigh boots, gloves, elbow pads, and a band on her left thigh. She also frequently wore her sunglasses and a pair of 'X' earrings. As Meltdown, she modified this costume so that it consisted of purple pants instead of a body stocking, a bare midrift and a new high-collared vest. [X-Force (1st series) #44, 51] 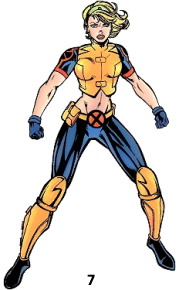 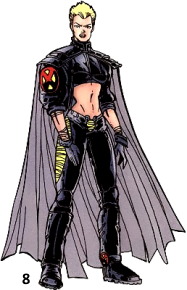 7) X-Force modified their costumes slightly after Onslaught. Meltdown now wore a pouched belt with a red 'X' on the buckle, purple gloves with 'X's on the backs of the hands, and a short-sleeved purple shirt under her vest with red trim cutting through a red 'X' on the arm. A second version of this outfit had the shirt and gloves in blue color. [X-Force (1st series) #58, 63] However, X-Force soon returned to their previous costumes.

8) Under Pete Wisdom's direction, Meltdown and the others adopted new costumes for their black ops war. Her new leather costume was left open bare at the midriff, and had lines of yellow fabric on the sides of her thighs. She wore a jacket and shoulder pads with an attached cape cut as strips, and giant red 'X' symbols on her sleeves. She also wore small black gloves. [X-Force (1st series) #102]

-) As a member of Cable’s Underground, Tabitha wore a variation of her purple and orange X-Force outfit. This time, she wore a full body stocking underneath the vest. [Weapon X (2nd series) #8]

9) When X-Force reunited to battle the Skornn, Meltdown assumed another new costume. This one was almost entirely canary yellow, comprised of a pair of pants and a midriff, short-sleeved shirt with a small collar. The shirt was trimmed with gray lines, and a set of three gray stripes extending up her chest, with the center one stopping at her through and the side ones tracing up her shoulders and down her sleeves. Her yellow boots and gloves were each topped with two bands of gray metal. [X-Force (2nd series) #2] 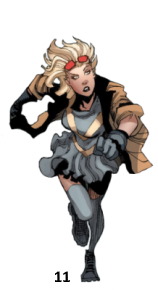 10) As a member of Nextwave, Tabitha normally wears either a brownish-orange one-piece skirt or blouse and pants, held tight by a metallic-looking corset. She also wears similarly colored boots, orange sunglasses, and a brown trench coat. [Nextwave #1]

-) Residing on Utopia, Tabby opted not to wear the generic X-Men costume, or any of her previous costumes. Instead, she usually wears a revealing, red, minidress. Sometimes she wore a brown trench coat, similar to her one from her time with Nextwave.

11) When she started working with Cable's new X-Force team, Tabby began wearing a costume in keeping with the rest of the team. Her uniform consisted of a gray, minidress with several yellow diagonal panels running down her front. She wore matching gray thigh-boots and gray gloves and often wore either a yellow jacket or yellow trench coat. [Cable and X-Force #10]

-) The Utopians generally all wore matching costumes, dark blue body suits with orange panels running across the shoulders and down the side of the tops of the arms. The panels connected down across the chest and flared out below the hips. Tabby's costume was unique in that she wore a minidress as opposed to a bodysuit, and the top of her chest was left exposed. She wore matching orange boots and a long dark trench coat with matching orange panels across the shoulders. [All-New X-Men (1st series) #40]

-) Working with other mutants against the Inhumans, Tabby was seen wearing pink trousers with a green miniskirt over them, and a large belt with an “X” across her front. She wore a yellow jacket with white collar and matching, clunky yellow knee-high boots. Various straps and patches featured across her jacket, sleeves and waist. As always, she wore some variation of sunglasses. [Secret Warriors (2nd series) #2] Later on New Tian, she was seen wearing a relatively plain dark outfit consisting of dark pants and a long jacket, cut like a dress, with a white collar and several light gray panels on the side. [Secret Empire: United #1]

12) As a member of the corporate New Mutants team, Tabby wore her own dress version of the standard costume, which consisted of a black body suit with a yellow panel running down from both shoulders to the groin, where a black X was formed. The simple costume was enhanced with mid-calf length yellow boots and yellow gloves. Tabby's dress included a yellow trim around the bottom of the mini dress, and she usually wore a red jacket over top, and some sunglasses. [New Mutants: Dead Souls #1] 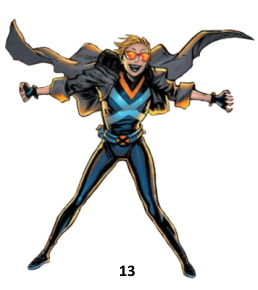 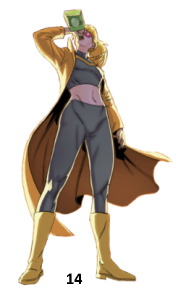 13) When X-Force reformed, the team all wore variations of a similar costume. Tabby's was a dark bodysuit with a white X across her chest, and a yellow V-neck collar. She wore a belt around her waist with a large X on it, fingerless black gloves and a long trench coat. [X-Force (5th series) #3]

14) Living on Krakoa, Boom-Boom began wearing yet another new costume, this one particularly underwhelming, consisting of black tights and crop top, leaving her mid-section exposed. The crop top had a single yellow band running down across her chest and matching yellow boots. Once again, she wore a long trench coat, and brightly colored shades. [New Mutants (4th series) #3] 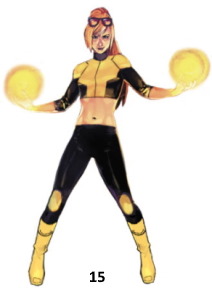 15) When the New Mutants returned from space, Tabby had changed her costume to one that matched the other New Mutants. It was basically the same as her Krakoan costume and consisted of black tights and a black crop-top, but with a large yellow panel that pointed downwards. She wore yellow boots and yellow knee pads and continued to wear a long trench coat and shades. [New Mutants (4th series) #9]

-) Feeling nostalgic, when Boom-Boom worked alongside Cable and Cannonball on a mission in space, she wore her first pink and red X-Force costume. [Cable: Reloaded #1]

16) Working with other mutants on a space-rescue mission, Boom-Boom and the others all wore matching dark blue bodysuits with a yellow panel across the abdomen and two yellow straps which connect from the hip to yellow panels running down the side of the body. A red circle with a black X was positioned in the middle of the abdomen, and four yellow panels were positioned in an X symbol across the chest, with a black panel underneath them. Yellow panels cover the knee, and yellow lines run down from the knee to the foot. These panels are replicated below the elbow down onto the glove covering the hand. Tabby added her brown trench coat and sunglasses to her costume. [Secret X-Men #1]