Against popular belief, X-Man and Cable are not counterparts of each other, as they have different mothers. While it’s true that Cable’s mother, Madelyne Prior, was a clone of Jean Grey and, as such, has the same DNA, the circumstances of Cable’s and Nate’s birth/creation are entirely different. Sure, the two Nates resemble each other a lot and for the most part have similar powers, but that’s not uncommon for siblings, which - genetically speaking - they are.

In the reality depicted in What If (2nd series) #46, Professor Xavier returned from space a bit earlier than in the main reality, namely right after Cable assumed leadership of the  New Mutants. 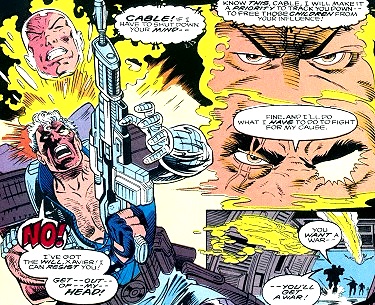 Xavier was concerned about the many new threats that had arisen since he had departed and was especially unhappy with a known mercenary being in charge of the New Mutants. However, when wanted to take over the team again, Cable wouldn’t let that happen and the New Mutants followed his lead when he escaped from Xavier’s mansion, the X-Men hot on their tracks. As Xavier threatened to hunt him down, Cable responded with a quite drastic move. Perceiving the X-Men a threat to his own plans for the New Mutants, he assassinated the heart and soul of the team - Xavier, Cyclops and Jean Grey. Obviously he had no idea that the later two were his parents. The remaining X-Men disagreed about the best course of action, and eventually divided. Wolverine led a quite radical squad of them, who eventually hunted Cable down and killed him. Still, the damage was done, as many of the X-men’s enemies used their disarray to strike at the various factions and kill many of their number. 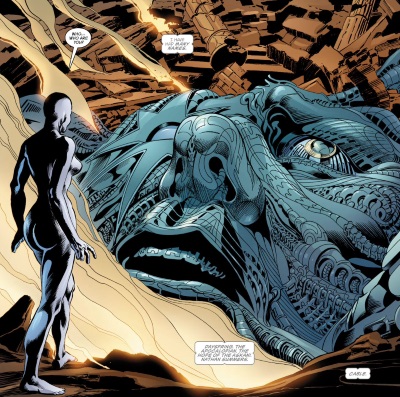 In the Earth X future, Cable was consumed by the techno-organic virus and planted beneath Magneto’s Sentinel City in the Savage Land. This saved him from the Red Skull’s wave that killed all other telepaths on the planet. An entrapped giant beneath the Earth, Cable eventually contacted the heroine called Iron Maiden and drew her to Sentinel City. There, he helped her to realize her power to control Vibranium, and supervised her when she manipulated the Earth’s core to stabilize its orbit around the sun. When she wanted to help Cable in return, he informed her that only the Vibranium-encased Eternal, Sersi, with her matter-rearranging powers could save him. Iron Maiden took off to find Sersi, but it is unknown whether she found her and, if so, if she could restore Cable to his former self.

When Cable's essence was scattered after his battle with Skornn, it touched down with three alternate versions of him: the warrior, the savior and the machine. In the first world, Cable had surrendered to the doctrine of Apocalypse. Alongside Blob, Spider-Man, and Archangel, he became War of the Horsemen of Apocalypse. He claimed responsibility for killing millions,

including Deadpool. In contrast, the second Cable had taken his goals of worldwide peace and serenity to the final level, creating a paradise on Earth. As Brother Nathan, he had orchestrated a world totally at peace, with all weapons being an anathema and humans and mutants living in perfect coexistence. The final world involved Cable being completely consumed by the techno-organic symbiote bonded to his system. His dream of unifying the world compelled the symbiote to undertake a Borg-like mission to assimilate all organic entities on the planet into a single collective consciousness.

Ten to fifteen years in the future, Cable was still fighting terrorists in the Hindukush all over the world together with his his partner, Irene Merryweather (unknowingly the current host of Apocalypse), when he learns of the rebirth of Phoenix. He contacted X-Force, though they met

their untimely End, when they were attacked by Mr. Sinister’s forces with most of X-Force dying and Cable captured. Infected with the nano-robots of the villain Technarx, Cable tried to fight back the transmutation process seemingly in vain. Fortunately, the X-Men tracked down Sinister’s lair and, with the help of his sister Rachel and possibly a bit of the Phoenix power, Cable managed to beat back the infection. He then joined a team of X-Men traveling to Shi’ar space to face the Shi’ar about their recent troubles, but what started as a battle against the Superguardians

actually turned into a desperate fight against a more powerful Cassandra Nova. Cable was the one who manages to hurt her dearly with his psychic powers but, as a result, his techno-organic virus threatened to fully consume him. Whereas he and everyone else present thought he was beyond healing, Phoenix purged him of the infection before being struck down by the villainess herself. Cable later joined several others in creating the tree of life and presumably transcended to another plane of existence. 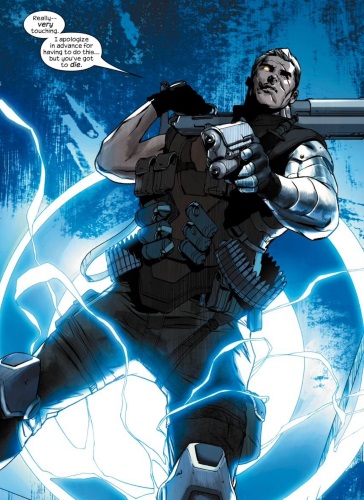 In the Ultimate Universe, there was also a man named Cable, but he was a totally different man. Instead of Nathan Christopher Charles Summers, this Cable was actually an aged Wolverine from the future, who has lost his healing factor. He arrived unexpectedly with the intention of murdering Professor X. With ease, he took down all the X-Men, including Jean Grey. But as he battled his past self, the X-Men managed to regroup, so he teleported away with Jean. While Cable rallied his own team including Domino, Grizzly, Hammer and Kane, another visitor from the future arrived at the home of the X-Men - Bishop - whose intention was to keep Xavier alive. A fight followed in which many of the X-Men were injured. The battle ended with Cable apparently succeeding in his mission, killing Xavier. Jean was rescued and Cable and his allies teleported away, leaving a very uncertain future for the X-Men and mutant kind alike.

In fact, Cable kept Charles Xavier alive in his future, allowing the two of them to train in secret for the coming of Apocalypse. Cable and Bishop were actually working together in secret, in order to accelerate the development of certain mutants' potential. While Cable trained Xavier, Bishop formed his own X-Men to push them to be ready. When the man known as Sinister evolved into Apocalypse, Cable returned from the future with Xavier to confront him. In the end, however, it was the power of the Phoenix manifesting in Jean Grey that defeated Apocalypse and undid most of the deaths and events surrounding his ascension. Cable vanished in this Phoenix effect, and was not seen again.

In X-Men: Forever, the X-Men's history veered in a new direction shortly before Nathan Christopher was infected with the techno-organic virus on the moon. As a result, Nathan grew up as a relatively normal son to Scott Summers. Nate lived near Anchorage with his great-grandparents rather than in the crosshairs at the X-Mansion, and his father eventually took a leave of absence from the X-Men in order to be near him. 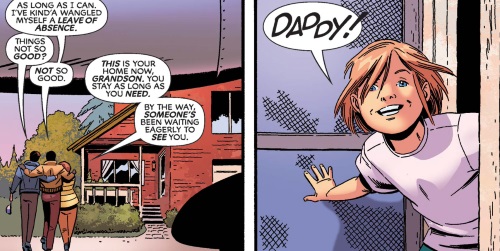 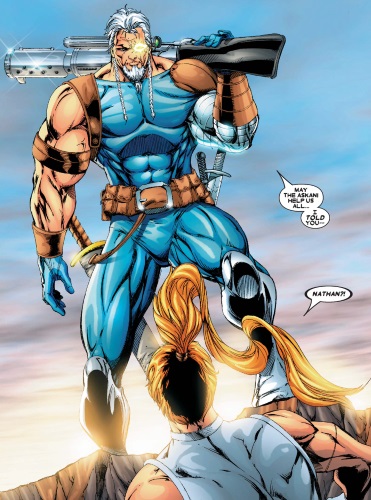 In X-Force: Shatterstar, Cable and his people spent three years fighting against the Apocalypse, in fact dimension-traveling version of Spiral who wielded the Five Fingers of Annihilation blade. Spiral amassed great power and killed many of Cable's allies over the course of their conflict. A turning point came when Shatterstar arrived from the same reality as Spiral. Shatterstar had been pursuing Spiral through a dimensional vortex and emerged only seconds after her from his perspective, but three years later from hers. Cable's version of Shatterstar had been killed by Spiral, but he soon recognized this was a man with the same valor as his fallen friend. Cable and Shatterstar led their forces to rescue their informant Sunspot and overthrow Spiral. Shatterstar reclaimed the Annihilation blade and departed this dimension with Cable's friendship and gratitude.

In the original Days of Future Past timeline, Nathan Christopher was never born, with Rachel Summers as the first and only child of Cyclops and Jean Grey. As a result, there was also no time-tossed version of Cable in this timeline either. The Cable of Earth-616 briefly visited this timeline in Cable (1st series) #71, meeting Cannonball and several members of his X-Force team, seeing how they would have lived without his influence in the era of the Sentinels. 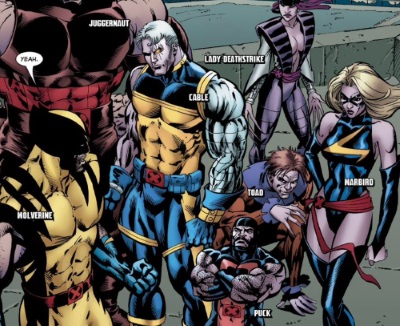 Another version of the Days' future was depicted in Weapon X: Days of Future Now. In this version, Cable was a member of Wolverine's second reincarnation of the X-Men, after most of the original team was killed by Director Colcord and Logan's first revival was betrayed from within. He attended a meeting engineered by Magneto to bring the various antagonistic mutant groups together under one flag in the hopes of defeating Master Mold. 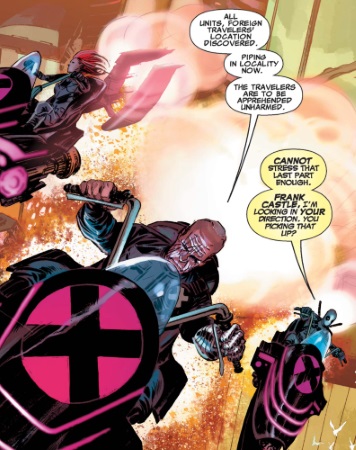 In the future of the Final Execution Saga, Genesis lost control and ascended as Apocalypse. Wolverine assembled an army of X-Force to fight him, and won. X-Force received acclaim and therefore control over society after that. They implemented their preemptive protection program to end murder and crime by targeting people before they committed the offenses, using psychic and precognitive mechanisms. Peace reigned in this new world, but people were being punished for "thought crimes". Thirty years in the future, Cable and Hope were part of X-Force's regime, fighting alongside the Punisher and the remaining members of the original X-Force squad. They were present when the X-Force of the past arrived and took them into custody in order to ensure their future remained as it was. 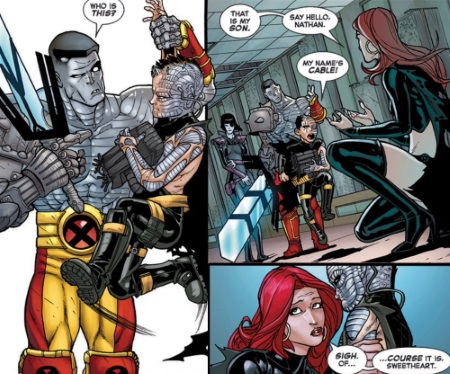 On Battleworld, Inferno reigned in one of the realms of Doom. A reality where the Darkchilde and Goblin Queen's invasion of demons from Limbo was never abated, the two women fought over what remained of Manhattan while the X-Men used science and magic to prevent Inferno from spreading further. Madelyne had reclaimed her son, now a six year old techno-organic and gun enthusiast. The young boy was amicable with the Goblin Queen's temporary allies, Colossus and Domino, but ultimately loyal only to his mother. This version of the Goblin Queen and her Bamf Demon survived Battleworld and traveled into Earth-616, but the fate of young "Cable" is unknown.