Cable is one of those few characters to whom the costume does not matter that much. He constantly switches between different versions, suits, armors and weapons, depending on what his missions require. The costumes presented below are those that he wore more often and over longer periods, though sometimes the versions blur into each other, as Cable constantly modified his outfits, adding straps, belts, packs, etc. 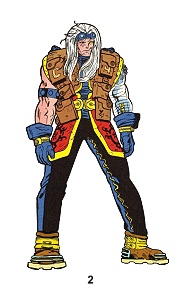 1) Nathan was raised in the Askani future and stayed there for decades. Of course, he wore the typical clothes of the time. At the age of eighteen, shortly before meeting his wife Aliya, he mostly wore an outfit that consisted of nothing else but a loincloth, a cape and several straps around his chest and upper arms. [Askani’Son #1-3]

2) Nathan Dayspring wore many different uniforms in his adult life, though the most notable change in his visual appearance would be that he let his hair grow long. That, coupled with his glowing eye, his bionic arm and his outlandish garbs, led to the local people thinking of him as a herald of the devil, when he first time-jump to the present and arrived in Scotland. [Cable minus #1]

3) As a member of the Six Pack, Cable wore some blue pants along with brown leather boots. The utility belts and additional pockets contained lots of weapons and other equipment. However, the most outstanding feature of this costume was a huge vest made of some padded material that apparently served as some sort of body armor. [Cable: Blood & Metal #1] 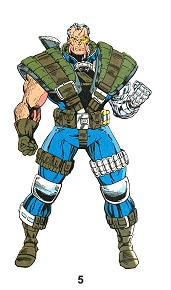 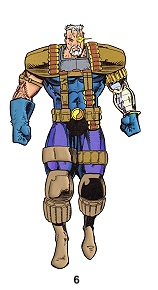 4) By the time Nathan assumed command over the New Mutants, he had replaced the vest with two mere straps of the padded material that ran from his belt over his shoulders to his back. Held together by a third strap, this left his bare chest and upper body rather exposed. [New Mutants (1st series) #87]

5) While training his new charges, Cable would change his costume ever so slightly. He eventually settled for one look shortly after the team changed their name to X-Force. This outfit combined elements of his two previous looks, as it containing two elements of padded body armor elements that were strapped across Cable‘s chest. [X-Force (1st series) #1]

6) Following the events of the X-Cutioner’s Song, Cable was presumed dead, but eventually returned. For a time, his mind was influenced by Stryfe’s personality, which caused him to grow a beard and change his hairstyle. [Cable (1st series) #1] Even after Stryfe’s influence was disrupted, Cable continued to wear the outfit that he had adopted during that phase: on top of the standard blue pants, he wore a sleeveless shirt and huge gloves in a lighter shade of blue. The straps that held the set of shoulder pads in place also served as ammunition belts.

-) Later on, he briefly tried out a blue bodysuit with a brown vest over it, but the costume was damaged in one of the team’s battles. [X-Force (1st series) #32]

7) Shortly afterwards, Cable opted for a totally different approach. He ditched the huge shoulder pads and started to wear costume in X-Man’s basic color scheme of blue and gold. [Cable (1st series) #15] Along with this costume, Cable was first seen wearing a necklace with a Phoenix logo on its pendant, apparently an important Askani symbol. Since then, he was also seen wearing it in some flashbacks. [Cable (1st series) #23]

8) After a while, Cable began to modify this outfit, changing the neckpiece of the blue shirt , adding a second red X-logo in his chest, or changing the arrangements of the golden metallic straps. Another revamp included a set of shoulder holsters with retractable blades in them. [Cable (1st series) #34, 42, 50]

09) Shortly after the return of his telepathy (which had been blocked by the Psi War) Cable tried out this more simplistic approach. Basically it was a blue body suit with a single red X on a yellow chest area, along with golden boots and gloves. [Cable (1st series) #63] However, he soon began to switch between a new outfit that looked almost identical, with their technological components connecting into the huge X over the chest area, and several of his past costumes. [Cable (1st series) #63, 71, 74] 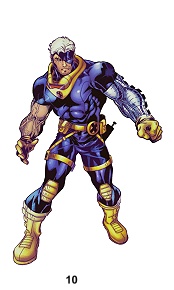 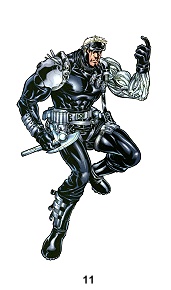 10) When Cable joined the X-Men to take the place of his father, Cyclops, who was presumed dead at the time, Nathan wore a costume that included a face mask, which covered one of his eyes as an homage to his father’s codename. Additionally, he had kept Cyclops‘ visor, which was built into the neckpiece of Cable’s uniform. [Uncanny X-Men (1st series) #381]

11) Shortly after Cyclops was discovered alive, Cable quit the X-Men again and returned to working as a solo operative. While fighting the Dark Sisterhood in several occasions, he adopted a black-op style look and once again carried lots of weapons and equipment on his body. [Cable (1st series) #90]

-) After these villains were defeated, Nathan searched for a new purpose in life and found it by making the many wars on Earth his own. Traveling around the globe, he no longer wore a defined costume, but a wide variety of casual and militaristic clothes. [Cable (1st series) #96]

12) While first assembling Providence, Cable adopted an armored body suit that covered him from the neck down. It was primarily black underneath, but covered with layers of blue armor plates across his arms, legs and torso. Some of these platelets had a series of thin orange lines tracing down his chest, sides and legs. [Cable & Deadpool #8]

13) On his quest against the Skornn, Nathan wore a black body suit with a yellow collar and metallic stripes on his sides, supplemented by yellow boots, chaps, gloves and chest armor. He also wore brown straps around his thighs and a pouched utility belt, along with his weapons and Psimitar lance strapped on his back. [X-Force (2nd series) #1]

14) After adopting the Dominus Objective and Cone of Silence for his own uses, Cable assumed a new costume equipped with the technology to all but mimic his lost powers. This uniform was primarily a blue jumpsuit zipped up the front ending in blue boots. His left techno-organic arm was exposed. Glowing yellow conduit wires for his gravimetric shell ran in sets of threes over his left leg, his right arm and his chest. [Cable & Deadpool #25]

15) Around the time he rejoined the X-Men, Cable changed into a new uniform. This suit is midnight blue with a large white arch on his chest. On his right shoulder is white circle with a red center and a white star on top of it. He wore white gloves, and a glowing wire extended from his right glove to his left pectoral, presumably for the Cone of Silence. In addition, he wore large combat boots and a selection of belts, bandoleers and straps over his main suit. [X-Men (2nd series) #188] 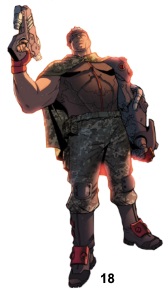 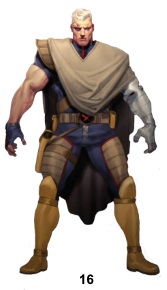 16) On the run with Hope throughout the timestream, Cable wore a short-sleeved blue jumpsuit zipped up the front. He accessorized as necessary with brown boots, padding on his legs, an 'X' belt and holster around his waist, and blue fingerless gloves. He often wore a poncho to conceal or hold Hope when she was younger. [Cable (2nd series) #1]

17) After Hope cured him of the techno-organic virus, Cable had an atrophied left arm and missing eye now that the T-O material was gone from his body. He wore a basic gray body suit underneath a shoulder harness and massive exo-arm support designed to restore and weaponize his near useless left arm. [Cable and X-Force #1]

18) In the next incarnation of X-Force, Cable had a more traditional military look. He wore an armored black chestpiece with red trim along with camo-detailed pants and black & red boots. His missing left arm was supplemented by interchangeable bionic exo-arms, and his missing eye covered by a headband and eyepatch. [X-Force (4th series) #1]

After his renewal, Cable has assumed a classic 90's look. He typically wears a basic blue bodysuit covered with shoulder pads and an array of straps, bandoliers, and pouches. His sleeveless tunic allows his artificial arm to display itself, while covering his hands with black gloves. In respect for his history, Cable wears a traditional 'X' on his chest. [Uncanny Avengers (3rd series) #2]