Master geneticist Mr. Sinister knew that he would not stand a chance in a direct battle between he 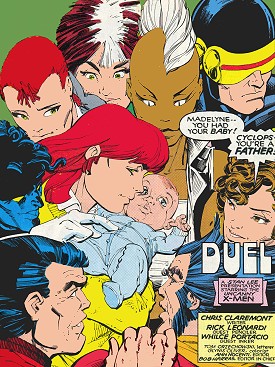 and his archenemy, Apocalypse, which is why he decided to let someone else do the work for him. For years, Sinister mapped the mutant genome and compared DNA samples of all known mutants, until he found those of Scott Summers and Jean Grey. Their union, Sinister judged, was to be the perfect match for creating the ultimate weapon - a mutant powerful enough to defeat Apocalypse.

The fact that Jean Grey was, at the time, believed dead was only a minor hindrance, as Sinister created a clone of her. He named the clone Madelyne Pryor, swiftly created a false background and arranged for her and Scott Summers to meet. As expected, Scott was instinctively drawn to a woman that so resembled his one true love. Not before long, they married and Madelyne became pregnant. While the X-Men were away on a mission, Madelyne gave birth to Nathan Christopher at Xavier’s mansion outside of Salem Center in Westchester County, New York. [X-Factor (1st series) #38, Uncanny X-Men (1st series) #200-201]

Soon afterwards, the couple moved to Anchorage, Alaska, in order to raise the boy. However, shortly into his retirement, Cyclops was approached by his old friend, Angel, with exciting yet disturbing news - Jean Grey had miraculously returned. Angel asked Scott to lead a new mutant detection group called X-Factor, which consisted of the original X-Men. Cyclops' need for action in his life, mixed with the knowledge that Jean Grey (the woman he loved before Madelyne) was alive and well, was enough to make him leave little Nathan and Madelyne and come to New York to lead the new group. [X-Factor (1st series) #1]

Without Cyclops to protect them, Mr. Sinister could make his move. He wanted the baby for himself and, knowing that an eventual meeting of Jean and Maddie would expose the latter as a

clone, he sent the Marauders to kill her.  Although Madelyne barely survived the assassination, Sinister erased all records of her and the child’s existence. Claiming the baby as his prize, Sinister returned to his secret lab complex that was hidden in a sub-basement under an orphanage in Nebraska. There, he would not only experiment on Christopher, but also study other kidnapped mutant babies. [X-Factor (1st series) #38, Uncanny X-Men (1st series) #239]

When he could not reach her on the phone, Scott first assumed that Madelyne had moved away 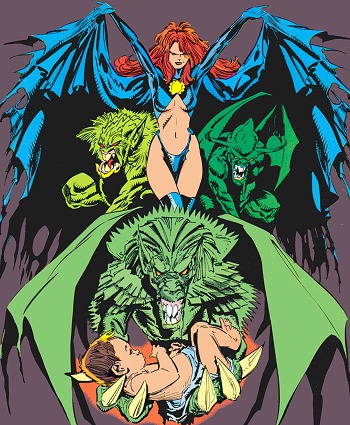 with the baby. Scott tried to search for them, but couldn’t find any trace of her, [X-Factor (1st series) #13-14] until the day when the X-Men’s apparent death in Dallas was broadcasted live on national TV. Among the team was his wife, Madelyne. When she was interviewed by a reporter recording the X-Men’s final words, she pleaded with her husband to find their son. Having believed his son to be in Madelyne’s care, Scott had no idea where to search for Christopher until the precog Destiny pointed him to the orphanage in Nebraska. When Cyclops and Marvel Girl mounted a rescue attempt, they were blocked by Nanny and the Orphan Maker, along with their Lost Boys. While they were battling Nanny's forces, a group of demons came in and kidnapped Nathan and other young mutant babies. [X-Factor (1st series) #27, 31, 35]

The demons were servants of the dread lord N'astirh and Nathan's own mother, Madelyne, who had been driven insane by the knowledge that she was a clone of Jean Grey and was now calling herself the Goblin Queen. Madelyne was prepared to sacrifice her own son in order to gain ultimate power, but the combined efforts of the X-Men and X-Factor defeated her. In her madness, Madelyne committed suicide. [Inferno crossover] 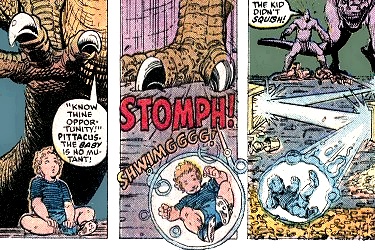 Nathan Christopher was taken to X-Factor's Ship, where he was cared for by Jean Grey and his father. Soon, he started to show his heritage as the boy manifested a protective force bubble around himself whenever he was in danger. [X-Factor (1st series) #42]

During the battle a woman, answering to the named Askani, appeared through a time-portal, claiming to have come from nearly two millennia in the future to save Nathan Christopher. Indeed, she stopped Beast from trying to remove Nate from the power drainer he was in, which would have killed him instantly with a cosmic energy pulse. Instead, Askani took the pulse herself, shorting out the equipment she needed to safely use her time-portals. Meanwhile, Cyclops himself destroyed Apocalypse-Prime and Nate was released. However, Nathan had been infected with a techno-organic virus that was consuming his body, cell by cell. Askani told Cyclops and Jean Grey that she had technology in her future that may be able to save Nathan, but her powers would most likely destroy her if she made another time-jump, resulting in the child being stuck in the future. Their choice was simple: let Nate die of the virus or never see him again. Cyclops chose the latter and sent his only son into the future. [X-Factor (1st series) #65-68]

When she arrived in the future, Askani dissolved into nothingness after giving Nathan to her kinsmen, who placed him in an incubation crib to preserve his life. As fate would have it, the leader of the 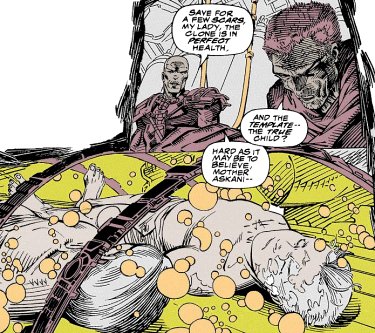 clan, the Mother Askani, was actually Rachel Summers, Nathan's sister from an alternate future. Rachel and the Clan Askani were all that remained in the future of Xavier's dream, fighting against a totalitarian regime controlled by the future Apocalypse. She ordered a genetic clone to be grown from Nathan's healthy cells in case the virus killed him. Miraculously, both template and clone survived. Immediately after, though, the dog-soldiers of En Sabah Nuhr attacked the Order of the Askani's stronghold. The cyborg kinsman Boak was able to retrieve young Nathan from his tank, but couldn't reach the clone before he had to flee. Therefore, the virus-free clone was captured by Apocalypse, who believed he now possessed the child lost to him two millenia ago. [Cable (1st series) #7-8]

Apocalypse's agent, Paladin Ch'vayre, destroyed Boak and took Nathan from the cyborg's grasp. Mother Askani had been prepared for this, however, and had grown two empty organic bodies from the cells of Cyclops and Phoenix's descendants. And so, just before the attack, the Askani Sisterhood time-jumped the minds of Scott and Jean Summers from their honeymoon into the genetic bodies created for them. Together, they succeeded in rescuing Rachel's dying body and retrieving Nathan from Ch'vayre's grasp. Mother Askani told them that she had brought them to the future in order to raise Nathan to overthrow Apocalypse one day. 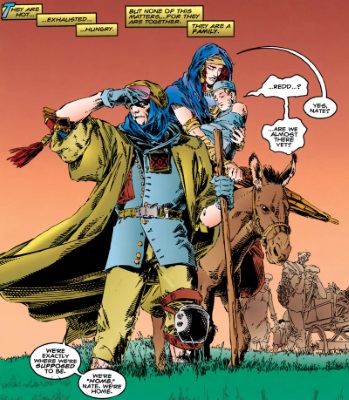 She had set up identities for them as Slym, Redd and Nathan Dayspring of the Sapien Caste. Slym and Redd then spent the next few years in their new bodies, raising the son they never had. When Nate was three years old, they came to the city of Crestcoast and joined forces with the cyborg known as Turrin and his meager resistance to Apocalypse.

Meanwhile, Apocalypse had been raising the clone as his own son, who unknowingly was to be his new host vessel the next time Apocalypse needed to switch bodies. En Sabah Nur named the boy after an ancient enemy the High Lord had fought in the 20th century called Stryfe, who was ironically the same boy, only decades older and having traveled back to the past. Twelve years after the Askani were eradicated, Apocalypse was in final preparations to make Stryfe his new host. Nate, Slym and Redd interrupted the process and fought back against En Sabah Nur. Acting as a team and as a family, they were able to destroy Apocalypse and his evil forever. Ch'vayre, who had come to regret his past actions, promised to try and raise Stryfe properly and erase Apocalypse’s survivalist dogma from his mind. Their mission completed and Rachel finally dying of old age, Slym and Redd vanished, returning to their own bodies in the past, leaving Nate alone. [Adventures of Cyclops and Phoenix #1-4]

After the death of Apocalypse, a group known as the High Lords of New Canaan, or New Canaanites, usurped control of the government and began martial law. Nathan Dayspring became bitter over his parents abandoning him, and the world grew hard 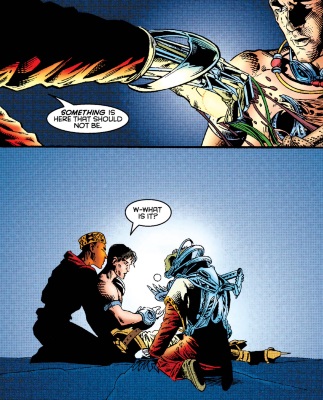 around him. Alongside his new friend, Tetherblood, he traveled what was left of the world. Meanwhile, Ch'vayre continued to attempt to bring Stryfe back from the darkness, but he soon became a helpless slave to Stryfe's psionic might. During their travels, Nate and Tetherblood first encountered a mysterious stranger who saved Nate's life. [Deadpool & Cable: Split Second #3] Five years after the defeat of Apocalypse, a teenaged Dayspring and Tetherblood were arrested for rebellious thoughts by 'Strator Umbridge of the New Canaanites. While imprisoned, Dayspring was visited by the enigmatic Blaquesmith, the only man ever taught the full ways of the Askani. Blaquesmith had been a student of the Mother Askani herself and she had given him instructions to pass on to her "brother." Blaquesmith used his powers to slow the flow of time in order to move past the guards and speak to Dayspring. He extracted a glowing orb from Dayspring's own techno-organics that he had been unaware of until then, the intelligence engrams of X-Factor's Ship. Ship's personality had been rebooted and took to calling itself Professor, for it remained in Dayspring's techno-organics, monitoring the spread of the T-O virus and advising him on situations. Blaquesmith told Dayspring to find the last refuge of the Askani at Ebonshire in Eurasia and enabled the two boys' escape.

Dayspring and Tetherblood parted ways and Nathan continued on his journey to Ebonshire. He reached the outer forests of the area where he found a pirate ship that had crashed nearby. 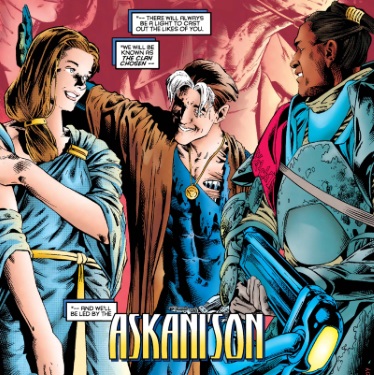 Nathan was attacked by a Daemon, but the Askani novitiate Aliya saved him. When they arrived at the Askani sanctuary, Dayspring was accepted into the fold by Madam Sanctity, the last of the Askani. Sanctity was quite power-drunk and she portrayed Dayspring as the Chosen One, the Askani'Son who would save the planet from the forces of Apocalypse. The New Canaanite leader, Tribune Haight, had tracked down the Askani stronghold, however, and proceeded to demolish it. Sanctity attacked Haight's forces with all her power, but disappeared in a flash of plasma. Though she was believed dead, she had actually been transported to Stryfe's nearby ship, where they formed an alliance. Dayspring and Aliya were captured, but Tetherblood blindsided Haight, having secreted himself earlier in the Canaanite forces. The three of them left in an escape pod and decided to found the Clan Chosen to combat the High Lords of New Canaan. [Askani‘Son #1-4]