Betsy Braddock was born in Great Britain and is the second child of Sir James Braddock, a former knight of the Otherworldly Captain Britain Corps and his Earth wife, Elizabeth. Along with her twin brother, Brian, there ws also Jamie, who is a few years older than the twins and was a renowned racing driver. Betsy was an adventurous spirit from an early age, idolizing and relating to her devil-may-care older brother more than her studious twin. [Uncanny X-Men (1st series) #256] 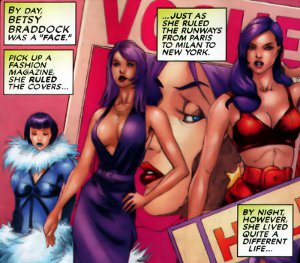 In time, Betsy embarked on a modeling career [Super Spider-Man and Captain Britain #243], and soon the siblings lost track of each other. (The fact that Brian was stranded in the medieval era and later had to journey through some alternate dimensions certainly didn’t help them to maintain contact).

Apparently, a few months / years passed during which she discovered her mutant talents of low-level telepathy and precognition, which led to her recruitment into the psi division of STRIKE, SHIELD's British counterpart. 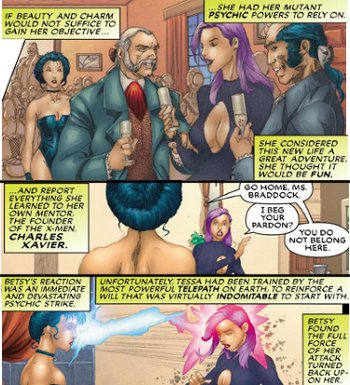 Though an agent, Betsy continued her career as a model and its was during this time that she dyed her hair purple, her trademark signature.[Daredevils #3]

One of her assignments was to infiltrate and investigate the Hellfire Club and, since her father was a well known member of the Club’s London branch, Betsy had no difficulties to get invited to the parties of Sebastian Shaw and his followers. Without knowing it, Betsy was in way over her head, which is why Tessa, planted in the Club as Professor Xavier’s spy, endangered her cover to make Betsy leave the Club before she would have fallen prey to the Inner Circle’s manipulations. [X-Treme X-Men (1st series) #3] 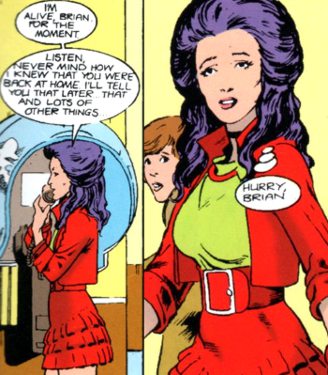 Betsy continued her modeling career and secretly served the psi-division of STRIKE, until the organization was infiltrated by agents of the Vixen, a British crimelord. As the psi-division posed a threat to her plans, she hired the Slaymaster to kill them one by one. This time, Betsy knew better than to act alone and contacted her recently returned brother, Brian, for help. By the time he arrived, only Betsy, her lover Tom, and a blind woman named Alison were still alive of the psi-division. All other members had already been killed by the opponent. With the help of the telekinetic Tom, Captain Britain defeated the villain and afterwards Betsy and her friends moved into Braddock Manor. [Daredevils #3-4]

Later, Great Britain was hit by a reality warp caused by Sir James Jaspers. In the altered reality, super-beings were incarcerated in concentration camps, forcing Brian and his friends to go undercover. Betsy used her precognition ability to tell the others when it would be safe to leave their hide-out to search for food or medicine, but not before long they were discovered. Tom sacrificed himself, attacking the soldiers telekinetically to buy the others enough time to get away, but through their mindlink Betsy felt the psychic backlash when he died. Frightened and almost catatonic, she was easily captured and put into a concentration camp. [Mighty World of Marvel (2nd series) #8-9]

Shortly after everything returned to normal (as James Jaspers was killed), an alternate Brian, called Kaptain Briton, fled to Earth. When Gatecrasher’s Technet, a team of alien bounty hunters, arrived to arrest him for some crimes, he hurried to Braddock Manor and engaged Brian in a fight. He won and switched clothes with Brian, handing over the “criminal“ to the Technet, who left with him. Betsy’s telepathy had been blocked by one of the Technet before, so she had been unable to notice the exchange. Later that night, the imposter tried to rape Betsy, but during their fight her telepathy returned and Betsy learned the truth. Her “brother” was from an alternate universe, where Kaptain Briton belonged to a fascist regime. Disgusted by his deeds in his native reality and the plans he had in mind for her, Betsy lashed out with her powers and fried Briton’s mind, killing him. [Captain Britain (2nd series) #5-7] 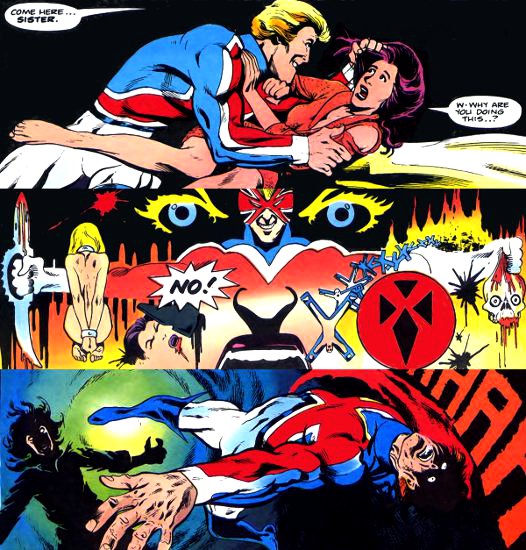 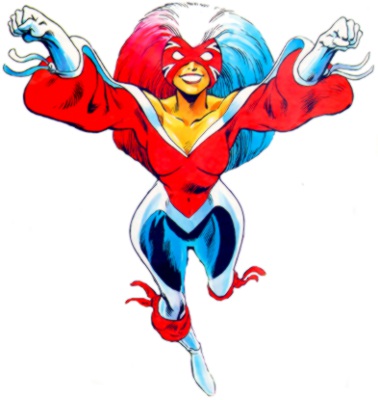 A few days later, an old friend from Betsy's STRIKE days returned and told her about a new organization called R.C.X. They wanted to deal with the Warpies problem; mutated children that were being born all over Britain as an after effect of the reality warp. Betsy allowed the Warpies to be moved into the manor, which caused a heavy argument with her brother, who left the family home in anger. [Captain Britain (2nd series) #8-9] While Brian was busy with a series of adventures around the world, Betsy was talked into taking over the mantle of Captain Britain II, using the modified uniform of Kaptain Briton, whom she had killed in self-defense. She was trained by Linda McQuillan, another alternate Captain UK, and, after some time of training, Betsy started to operate alone. One day, she was lead into a trap by the Vixen and Slaymaster, who almost beat her to death. He also stabbed out her eyes, blinding her forever. Brian received a mental distress call from his sister and rushed to the battleside as fast as possible. When he became aware of what had been done to Betsy, he crushed Slaymaster’s head beneath a huge rock, defeating his arch enemy once and for all. [Captain Britain (2nd series) #13]

After recovering from her other wounds, Betsy went skiing to Switzerland. Actually, she was not fully blind, since she could use her telepathy to see the world through the eyes of the other people around her. [Captain Britain (2nd series) #14]

From there, she was captured by Mojo and Spiral, who held her captive for about a year, during which they gave her bionic eyes to replace the damaged ones, and named her “Psylocke." They also made her the star of a TV show called “Wildways,” which actually was an otherdimensional realm. Kids all over the world were encouraged to call a certain phone number and join the Wildways and, ultimately, the New Mutants became involved too. After Warlock and Cypher were able to release Betsy from Mojo’s hold, all of them returned to Westchester. Betsy decided to stay at Xavier’s school, wanting to learn how to master her powers, since she had been a victim too long. Strangely, the bionic eyes remained with Betsy, giving her visual sight again. [New Mutants Annual #2]

Little did she know that the implanted eyes could also function as cameras that allowed Mojo to record everything she saw and broadcast it as TV shows in his Mojoverse. When the X-Men shows became an outstanding success, Mojo tried to turn them into his loyal servants by reducing them to childhood and raising them anew. Luckily, they were saved by the New Mutants. During the fight, Betsy learned of the purpose of the bionic eyes, but she decided to keep it secret.  Over the next few days, Psylocke discovered, through her telepathy, that Doug Ramsey of the New Mutants was in love with her. Even though she had similar feelings, she did not explore their relationship further since he was under age. [Uncanny X-Men Annual (1st series) #10]