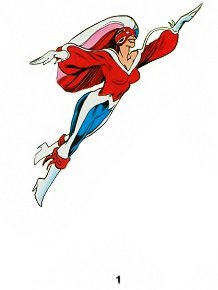 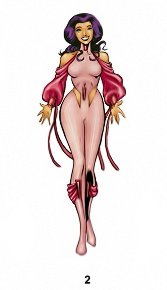 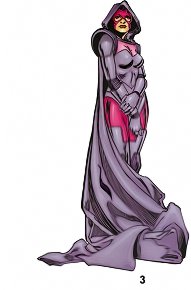 -) In early stories, Betsy Braddock had nothing representing a costume. She might have worn some standard military clothes while training with STRIKE, the British version of SHIELD, but much of that time is still shrouded in mystery.

1) During a time that her twin brother, Brian, was touring the world, Betsy was talked into assuming the mantle of Captain Britain, wearing a modified suit of an alternate Kaptain Briton, who had tried to rape her only several weeks before. The helmet included a wig with red, white and blue streaks of hair. [Captain Britain (2nd series) #12-13]

2) Psylocke proved herself during the Mutant Massacre and, afterwards, was invited to join the X-Men, who had lost several members due to injuries received during the crisis. She gladly accepted, wearing a self-designed costume. [Uncanny X-Men (1st series) #213]

3) In time, Betsy realized that she would be a liability in physical combats, which is why she replaced the outfit with a special form of body armor. Even the cape was made of some sort of chain mail. [Uncanny X-Men (1st series) #232] 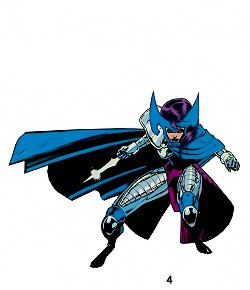 4/5) After emerging amnesiac from the Siege Perilous, Psylocke’s body was switched with that of the Asian martial artist, Kwannon. Brainwashed into believing herself to be the Hand’s prime assassin, Lady Mandarin, she wore these two suits. The more formal attire and the other one as basic costume for her missions. Even after she was freed from illusion, Betsy kept wearing the ninja outfit since, now able to protect herself, she no longer needed any body armor. She would still occasionally appear in her Lady Mandarin armor, often using it as "psychic armor" for defense while on the astral plane. [Uncanny X-Men (1st series) #256-258]

6) When the X-Men reunited after the events of the X-Tinction Agenda, they tried out wearing the basic X-uniforms to give them a team feeling. For several members, including Psylocke, it was the first time to wear these standard suits. [Uncanny X-Men (1st series) #273]

-) With the original five rejoining and the X-Men dividing into two strikeforces, the group returned to wearing individual uniforms. Betsy returned to her ninja looks and wore them for quite a long time. [X-Men (2nd series) #1] 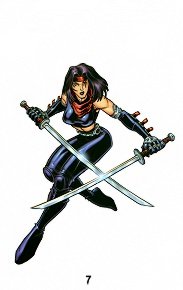 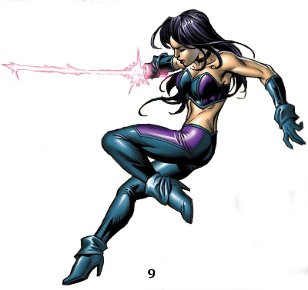 7) Only when all of the team re-designed their costumes did Psylocke do so as well. Most of the other designs included a huge X across the chest, but evidently Betsy settled for something different. [X-Men (2nd series) #100]

8) After the X-Treme X-Men left the mansion, they came up with a set of new costumes. Betsy’s outfit was entirely black and matched with the entire team’s black and red looks. [X-Treme X-Men (1st series) #1]

-) Having just returning from the dead, Betsy was given one of the standard blue and gold uniforms to wear. [Uncanny X-Men (1st series) #455]

9) After deciding to stay with the Exiles, Psylocke altered her costume to suit her new team. She wore a dark blue and purple tube top that exposed her midriff and a pair of dark blue pants with purple panels down the side. She complimented the look with a blue choker, gloves and high heeled boots. [New Exiles #1] 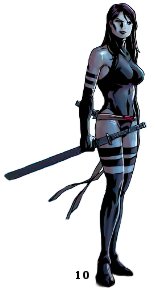 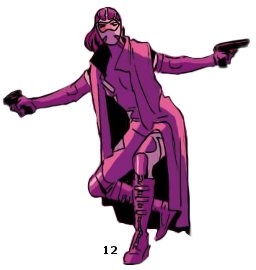 10) When Psylocke joined X-Force, she adapted her iconic bathing suit costume slightly to go with the team’s monochromatic theme. The costume itself was now black and she wore a white sash to go with it. [X-Men: Second Coming #2]

11) After she was kidnapped by Archangel, Psylocke took to wearing a costume that covered up more of her body. She now wore a sleeveless dark blue body suit that had patches of exposed skin on the side of her thighs. She also wore long dark blue opera gloves that exposed her fingers and a white sash too. Later on, she changed the color of her body suit to black to match the rest of her team. [Uncanny X-Force (1st series) #15]

12) When Psylocke joined Fantomex and Cluster in their thieving ways, she adopted a costume similar to theirs. She wore a full body purple costume that had white zig-zags down the side of her torso and legs. She covered up her entire head with a purple and white mask that had holes for her eyes and allowed her hair to be exposed as a pony-tail. Over the top of it all, she wore a full length purple trench coat that also had white zig-zags down it. To finish off the ensemble, she wore knee-high purple boots and carried around two handguns with her. [Uncanny X-Force (2nd series) #7] 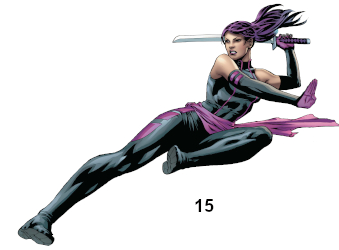 13) After joining Storm’s X-Force team, Psylocke once again adapted her costume to fit the team’s. She now had a black full body suit which had a white X on the chest and white stripes on the thighs and arms. She still wore her red sash and often carried around a katana too. After the team disbanded, Psylocke adopted this as her official X-Men costume. [Uncanny X-Force (2nd series) #1]

14) Whilst Psylocke operated on Cable’s X-Force, she wore a different costume than her X-Men one. This costume was a black full body suit with red trimming and fingerless red gloves. She also wore a large red belt and carried her katana around on her back. [X-Force (4th series) #1]

15) With Magneto's X-Men, Elizabeth adopted a sleeveless body suit of purple and pink material. She wore it with long gloves, her classic belt sash and wielded both physical katana and psi-swords in combat. [Uncanny X-Men (4th series) #1] 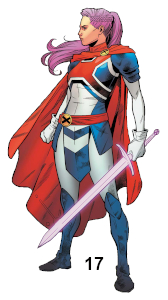 16) When Elizabeth Braddock emerged from Sapphire Styx in a recreation of her original body, her costume changed as well. This look incorporated elements of her Asian look while also harkening back to her original X-Man colors. The off-the-shoulder bodysuit had pink and light purple colors from her Australian era costumes, while the outer trim, boots and gloves had the dark purple-black she had favored in most recent years. [Hunt for Wolverine: Mystery in Madripoor #4]

17) In her second tenure as Captain Britain, Elizabeth's costume is based on the one worn by her brother Brian in the 80's, with a large Union Jack covering her chest. However, while Brian's suit was the equivalent of spandex, Elizabeth needs more protection physically, and so wears her costume like a suit of armor. She carries a helmet based on Brian's as well, but frequently removes it. Finally, her conflicting loyalties are on display with a pair of “X” clasps on her shoulder and hip. [Excalibur (4th series) #1]