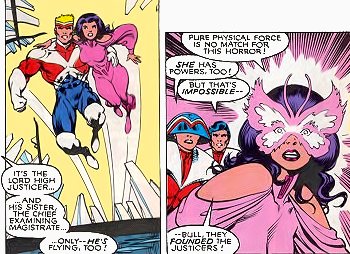 During the Cross-Time Caper, Excalibur visited many alternate realities, including one, depicted in Excalibur (1st series) #23, where a war between superbeings had nearly devastated Earth. As a response, Brian Braddock and his sister, Betsy, created a police state where superpowers were outlawed. They themselves served as Chief Justicer and Examining Magistrate respectively. One of the last undiscovered superhumans, Illyana Rasputin aka the Darkchilde, was about to kill the dimension-hopping Excalibur when they arrived in this world, prompting Brian and Betsy to reveal their own powers to help stop Illyana. Their superhuman status revealed in front of the police force they had created, it is unknown what became of the Braddocks afterwards. 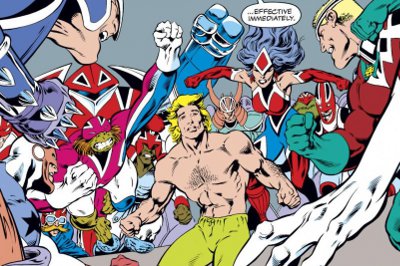 At least one counterpart of Betsy Braddock became her world’s version of Captain Britain, and she seems to have not usurped the role from her brother, as she was a full-fledged member of the Captain Britain Corps. She was briefly seen in Excalibur (1st series) #44, during Brian Braddock’s trial on Otherworld, and it’s quite possible that the Corps included other alternate Betsys as well. 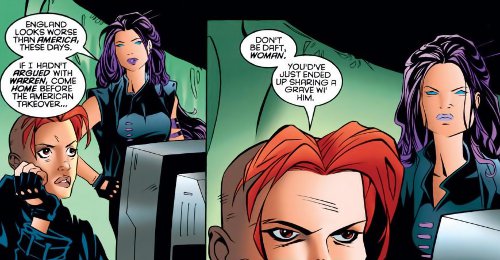 The Psylocke version of a dark future not unlike the prominent Days of Future Past, shown in Excalibur (1st series) #94, had moved back to Great Britain after breaking up with her lover Archangel. Actually, this move saved her life, as the X-Men were captured and killed soon thereafter. Betsy then served with Excalibur, which was led by Pete Wisdom, in their fight against the Sentinels, being a great asset to the team both because of her being an experienced telepath and a ninja warrior. Unfortunately, she perished along with most of the team, when they tried to rescue their former teammate Douglock from his kidnappers - the corrupt Secret Service Black Air. 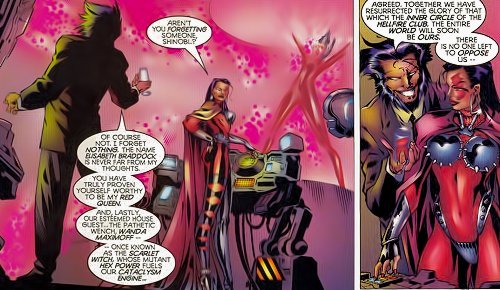 In the true Days of Future Past, Betsy’s life had taken a quite different turn. She had become corrupt and joined Shinobi Shaw’s Hellfire Club as their Red Queen. Together, they captured the Scarlet Witch, using her probability altering powers to create worldwide disasters. Eventually, Wolverine led a small taskforce to their stronghold and severely wounded Psylocke in the battle over Wanda. Logan then arranged for Betsy to be returned to the care of her brother, Brian, hoping that her old self could be restored somehow.

Although not seen on-panel, Psylocke’s counterpart of the MC-2 universe was at least mentioned. Apparently, this Psylocke acted as a godmother to Wild Thing, the daughter of Wolverine and Elektra, and she also trained her in the use of her psychic powers. Wild Thing had no real claws but psionic ones that she could use in similar ways as Psylocke her psychic katana. 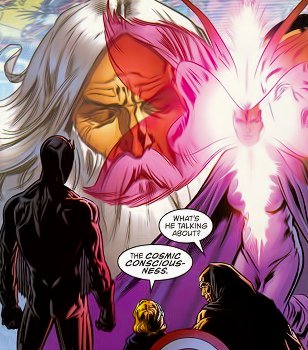 It is unknown if the Betsy Braddock version of the Earth X future timeline never switched bodies with the Asian assassin Kwannon or if the effect was undone somehow, but she was entirely Caucasian when she was brought to Otherworld to further hone her telepathic and precognitive powers under Merlyn’s and Roma’s tutelage. Her abilities boosted, Psylocke’s telepathic signature, the butterfly image, was much bigger than before and constantly “on,” bathing her head in bright, pink light. Her training completed, she rejoined her brother, King Britain, on Earth at some later point, as she, Merlyn and Doctor Strange used their powers to weaken Mephisto, allowing Brian to kill him. 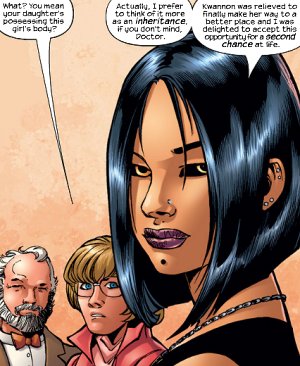 In the Ultimate universe, Psylocke Braddock was a telepathic agent of STRIKE - SHIELD’s British counterpart - which allowed her to escape from being harassed for being a mutant. She and her partner Dai Thomas worked together with the X-Men to find and capture Moira MacTaggert’s and Charles Xavier’s immensely powerful rogue son, Proteus, who could alter reality and possess people. Unfortunately, David possessed Psylocke and the woman perished when Colossus smashed her with a truck to kill Proteus. However, Psylocke’s consciousness hung on and she encountered the mind of Kwannon, a comatose brain-damaged, psychic Asian woman. Kwannon wanted to be freed from her life and she allowed Psylocke to take over her body in exchange for her freedom.

Psylocke was let go from STRIKE because she was now in the body of a minor and was soon drafted into the X-Men by Bishop. When the ultimatum wave, hit she was believed dead but eventually showed up alive and well sometime after. She was one of the few mutants to choose to forgo the “cure” and retain her powers. She moved to Reservation X along with the remaining mutants but started actively working against their leader, Kitty Pryde. She sided with Mach V, who vied for leadership of Reservation X, and spent the next few weeks manipulating everyone around her with her telepathy. Jean Grey figured things out and confronted her, discovering that she may have not been Psylocke at all. How long this imposter posed as Psylocke is unknown, as is the whereabouts and safety of the real Psylocke. 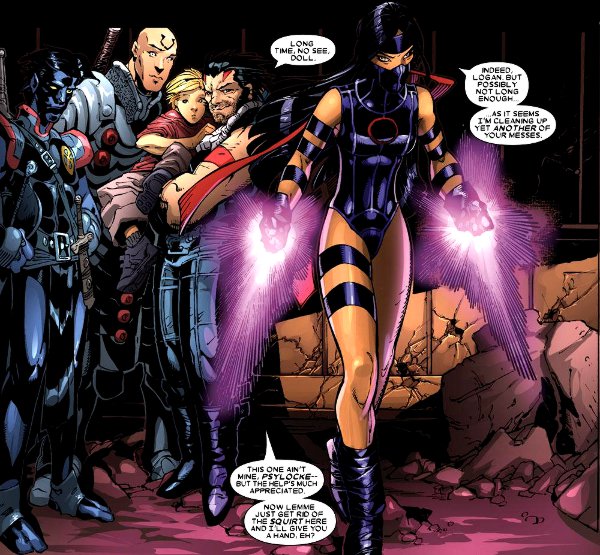 The dark reality known as the Age of Apocalypse diverged from the main Marvel Universe about twenty years in the past, long before the body-swap between Betsy and Kwannon occurred. Although this incident was rather complicated and unlikely to be replicated in a reality that different, this world's version of Psylocke too appeared as the Asian ninja. While Psylocke was apparently an old comrade of Wolverine, she was no member of the X-Men and didn’t participate in their many battles with Apocalypse or his troops. Actually, considering the fate of many other telepaths, them being dissected and used for the Brain Trust, a defensive mechanism of Apocalypse’s stronghold, it’s quite likely that Psylocke had gone into hiding somewhere outside of the North American continent under Apocalypse’s thumb. Only several months after his defeat did Betsy make her presence known, helping the X-Men in the nick of time by saving young Charles Lehnsherr from the renegade Guthrie Clan.