Vanessa Geraldine Carlysle was born and raised in New Brunswick, New Jersey. Apparently an only child, Vanessa loved to participate in neighborhood scavenger hunts. However, her childhood was far from normal, given that her mutant abilities manifested in various stages, with some aspects already kicking in long before Vanessa reached puberty. Ever since she was a little girl, Vanessa started to “get a feel” for people if she hung around them long enough.

In her teens, Vanessa was kicked out by her parents when they discovered that she was a mutant. While they may have just picked up on her apparent “sixth sense” as some sort of mind reading power, it’s rather likely that she was also beginning to show some early signs of her physical mutation, like involuntarily switching back and forth between her regular self and the blue-skinned body that would eventually become her template form. [Deadpool #minus 1, Deadpool: The Circle Chase #2]

Still a minor, Vanessa lived off the streets and ran away to Boston where she turned to prostitution to survive. Actually her emerging powers  helped her with this profession, as Vanessa once 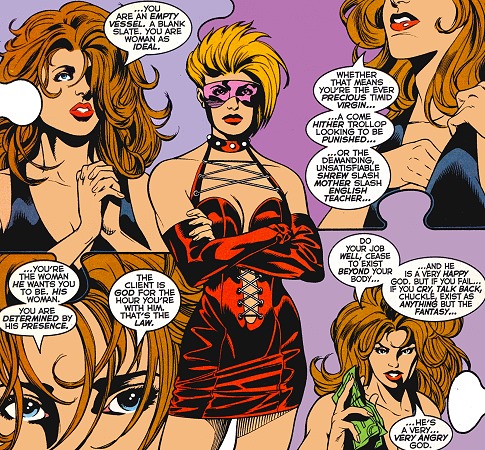 described it as having to “forget that you have an identity,” and rather become an empty vessel to be filled with the customer’s idea of the ideal woman. It was during this time that Vanessa met and fell in love with mercenary Wade Wilson. Romanticizing their relationship and imagining all the ways the brooding mercenary could kill her customers helped Vanessa get her mind of the disgusting things she had to do as part of her job. 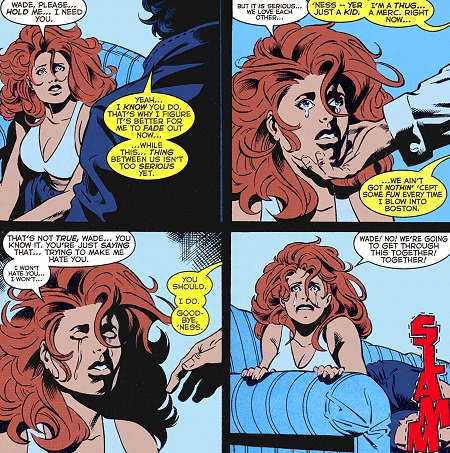 Vanessa’s feelings for Wade were deep and genuine. She wouldn’t budge and give away his location when some of his employers came looking for him over an assignment he had botched; she’d rather let herself get shot than betray her lover. One can only imagine how much it must have hurt that Wade broke up with her on the same day, claiming that they were too different and that he hadn’t considered their relationship as serious as she had. [Deadpool #minus 1, Deadpool: The Circle Chase #3] It would be years before Vanessa learned the truth, namely that Wade had been diagnosed with cancer in its final stages and didn’t want to burden her.

Heart-broken, Vanessa became a mercenary herself when she fully manifested her shape-shifting powers. Although her power always maintained some involuntary aspect to it, Vanessa found herself able to take on the form and special powers of any person she made long-term contact with. In fact, she copied other people so perfectly that neither a genetic scan nor the most skilled telepath could discover her true identity. Operating under the alias of Copycat, Vanessa came into contact with other mercenaries such as Sluggo, Slayback and Kane, who were all involved with the Weapon X program that had initially created Wolverine. Now referring to himself as Deadpool, Wade Wilson too was an operative of that program, as they had managed to cure his cancer with a serum derived of Wolverine’s healing factor. Unfortunately, though, the treatment had left Wilson horribly disfigured and borderline insane. 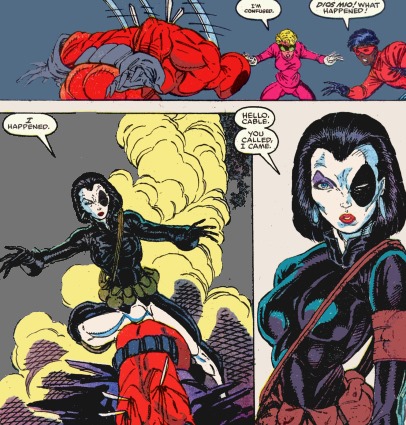 Regardless, he and Vanessa hooked up again in an on-and-off relationship and eventually they both ended up in the service of an international arms dealer named Tolliver. It is unknown what kind of leverage Tolliver had against Copycat but, when he learned that his arch-enemy, Cable, was trying to get in touch with his former associate, Domino, Tolliver arranged for Domino to be kidnapped and ordered Vanessa to take her place. [X-Force (1st series) #15, 23] Vanessa’s meeting with Cable was set up quite dramatically, as Tolliver had sent Deadpool to assassinate Cable and “Domino” arrived quite in the nick of time to rescue the man and defeat Deadpool, thus instantly proving her worth to the New Mutants whom Cable was leading at the time. [New Mutants (1st series) #98]

As Cable had not seen the real Domino in years, he didn’t notice any odd behavior on Vanessa’s part. He completely trusted “Domino” and relied on her help while molding the New Mutants into a tight combat they dubbed X-Force. Together they drilled the adolescent mutants in the use of their powers, but Cable also turned to Domino for tactical analysis and he confided in her about things he wouldn’t tell the rest of the team, [New Mutants (1st series) #99-100, New Mutants Annual #7, X-Force (1st series) #1-5] while secretly Vanessa reported everything she learned to Tolliver.

Over time, Vanessa came to like being Domino too much for her own good. It was the first time in her life that she was someone whom others respected and looked up to. Additionally, whereas Cable and the real Domino had only had a platonic relationship back in the day, Vanessa slowly developed genuine feelings for the man and acted on them. As she was under the assumption that Tolliver had killed the real Domino, Vanessa must have believed that she could keep on being Domino for as long as she wanted. [X-Force (1st series) #6, Cable (1st series) #39]

Naturally, Tolliver wouldn’t tolerate betrayal, so when Vanessa stopped sending in her reports, he sent Deadpool after her when the rest of X-Force were away on a mission. Deadpool and “Domino” fought each other in  X-Force’s base, with Deadpool eventually getting the upper hand. He reminded Vanessa that, while she could dump him as her 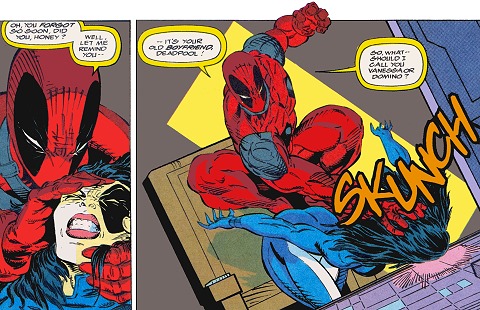 boyfriend, she should better not try to cross their employer, Tolliver. Yet, Vanessa did exactly just that when X-Force returned and, while she kept on pretending to be Domino, she admitted that she had been working for Tolliver. On Cable’s orders, she contacted Tolliver and faked still being loyal to him, as she prepped X-Force’s base with explosives. The plan was for X-Force to leave the base before the explosions and fake their deaths. However, Tolliver had remote-control access to the bombs and set them off early. [X-Force (1st series) #11-13]

During the explosion, Cable and “Domino” were separated from the rest of X-Force. As Cable demanded from her to take him to Tolliver, Vanessa led him to a villa in Sicily that served as his hideout. Inside, both Cable and Vanessa were in for a surprise, as they happened upon the real 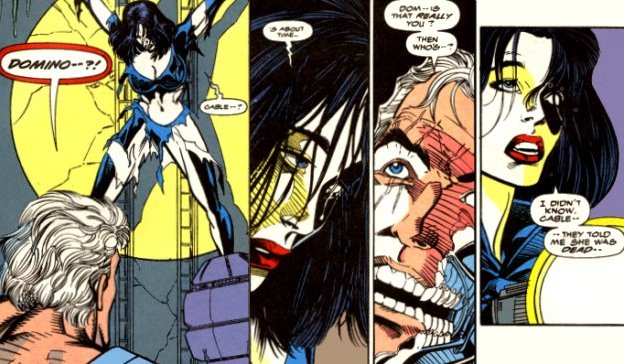 Domino, who had been held prisoner there for the better part of a year. Vanessa was as shocked as Cable, who demanded answers from her. Just as she wanted to explain herself, though, she was stabbed from behind by Deadpool. During the following battle between Cable, the real Domino, Deadpool and Tolliver, the gravely wounded Copycat managed to slip away. [X-Force (1st series) #14-15] 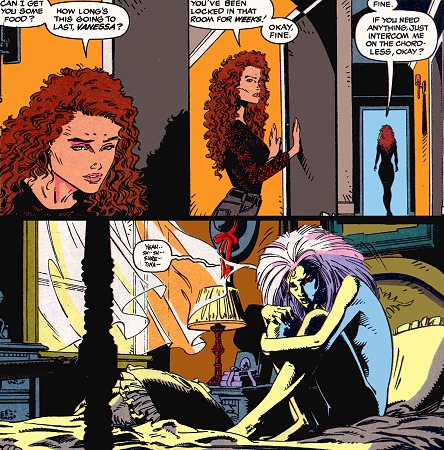 While recovering from her injury, Vanessa retreated to the home of her best friend, Tina Valentino, in Norwell, Massachusetts. She spent weeks locked up in her room, until she was strong enough to use her shape-shifting power again. Adopting the guise of Tina, Vanessa and her friend had some fun in town pretending to be identical twins. Before long, Deadpool tracked Vanessa down, looking for revenge. Additionally, as Tolliver had been reported dead in the meantime, Vanessa and Tina found themselves hunted by Sluggo, who believed that Copycat withheld information on her employer’s will which was rumored to lead to a huge treasure. As they tried to outrun Sluggo, Tina was shot. [X-Force (1st series) #19-22]

Before Copycat shared the same fate, she was saved by Hammer, Grizzly and Domino, who shot Sluggo and Deadpool with a stun gun. The three mercenaries were one half of Cable’s former group, the Six Pack, and trying to locate Cable.  Although Domino was furious with Vanessa for 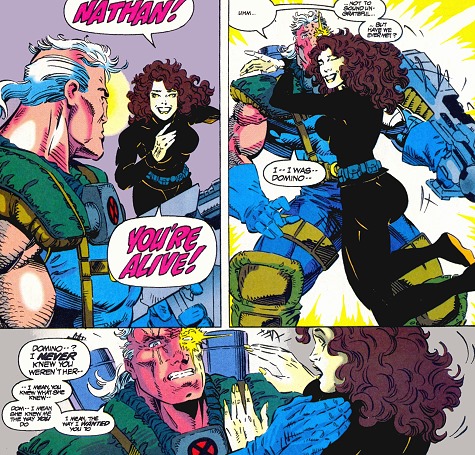 having stolen her life, she agreed not to kill her, as Copycat promised to lead them to X-Force. Vanessa took the three mercenaries to X-Force’s destroyed base where they found clues to their current location. Once they reached the team’s new base, they ran into Cable and the remaining members of the Six Pack, Kane and Bridge. The reunion ended up being bitter-sweet as Vanessa was overjoyed to see Cable again, who did not even recognize her in the form of Tina Valentino and made it pretty clear that he had no interest in her at all. Therefore, she secretly snuck away while the six mercenaries were busy settling their Six Pack matters. [X-Force (1st series) #23-24, Cable (1st series) #4]