Copycat actually never wore an official uniform as it would have been rather pointless, given that she regularly adopted the identities (and looks) of other people. In at least two occasions, though, Vanessa maintained the role she played for a lengthier period of time and as such changed from private clothes to official costume several times while keeping up the pretense of being those people. 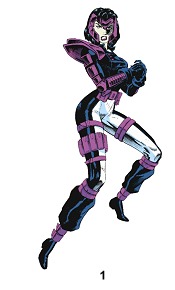 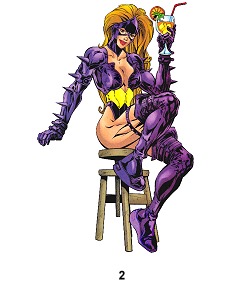 1) When she joined X-Force while posing as Domino, Copycat wore a variety of slightly different costumes based on what the mercenary had been wearing as a member of Cable’s Six Pack. Her gear included a midnight blue bodysuit with a solid white cutout along the inside of her legs. Occasionally she wore additional equipment in the form of wristbands, epaulets, head frame and belt of pouches, all colored grey or purple. [New Mutants (1st series) #98, X-Force (1st series) #1]

2) While impersonating Titania, Vanessa also adopted her trademark outfit, consisting of a long-sleeved bathing suit and over-knee boots, both colored purple, a face-mask in the same color and a golden metallic weight-lifter belt. The sides of her sleeves and boots sported thorns. [Deadpool (2nd series) #38]