Born to Christopher and Katherine Anne, Scott Summers is the older brother of Alexander and Gabriel. When Scott was a young child, he was plagued by mysterious headaches his doctors could never properly diagnose. His mother feared that it might be cancer or some kind of aneurysm, never suspecting that his headaches were actually a side effect of her son's burgeoning mutant power. Unfortunately for Katherine, she would not live long enough to learn the truth. [X-Men: Prelude to Schism #3] 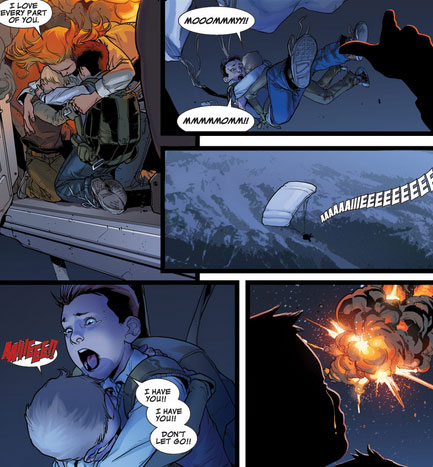 During a flight back from Anchorage after a family vacation, the family witnessed a Shi'ar Imperial freighter materialize above their family's plane. The Shi’ar wanted no witnesses, so the plane was set on fire. With only one parachute left, Kate Summers strapped Scott into it and tied Alex to him. She and Chris said their final goodbyes to their children and pushed them out the plane door. The parents were teleported from the plane a moment before it exploded and were transported to the Shi’ar craft where they were kept as Earth specimen. The explosion of the plane set the Summers brothers' parachute on fire. During the fall, Scott used his optic blasts for the first time to slow their descent and shielded Alex from their landing with his body. Though surviving, Scott hit his head in the crash. This injury caused a slight amount of brain damage, affecting the portion of his brain that controlled his latent optic blasts, though Scott later made the conscious decision to not try to control his power. [Uncanny X-Men (1st series) #156, Astonishing X-Men (3rd series) #14]

Alex and Scott were brought to an orphanage in Omaha, Nebraska, secretly run by Mr. Sinister, who had registered Scott manifesting his mutant power. Because Sinister believed that Scott was the Summers brother with the most potential, he had Alex adopted away from the orphanage to both separate them and render Scott emotionally vulnerable. [X-Factor (1st series) #39, 115]

Mr. Sinister played many roles in Scott's life. As Michael Milbury, he was the head of the orphanage. As Nathan Masters, he was the chief doctor. As "Lefty" or Nate, he was a fellow orphan. Sinister understood that Scott's recurring headaches were caused by his emerging mutant powers and, through trial and error, would find that 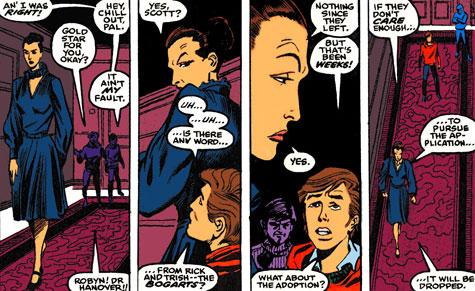 ruby quartz glasses helped ease his pain. Sinister tormented Scott as Lefty and even killed his potential foster parents before they could adopt him. When Scott befriended a new doctor, Robyn Hanover, who was able to reach the boy thanks to his admiration for planes and pilots, Sinister brainwashed her. From that day on, she acted as cold toward Scott as the rest of the orphanage staff. Fortunately for Scott, just when he felt more alone in the world than ever, he was telepathically contact by Charles Xavier and his young ward, Jean Grey. Although the glimpse Scott caught of them was brief, he formed a bond with Jean in that moment that would last forever.  [Classic X-Men #41-42]

Mr. Sinister, meanwhile, failed in breaking Scott, because Scott eventually ran away from the orphanage. A stray blast of his power accidentally blasted a steel girder off a construction site, causing it to plummet toward a crowd below. However, with a second blast, Scott shattered the girder before anybody was hurt. Unfortunately, the incident was filmed and the crowd perceived Scott as a menace, so he ran away.

When the police found him, they recognized him as the kid who was missing from the orphanage. The policemen made Scott take off his glasses, thus unleashing his blast, and Scott ran away once more. He felt himself strangely drawn to a cabin where he was welcomed by a man called Jack O’Diamonds. Jack had sent a summons call to fellow mutants and needed the boy to break into the nuclear power plant that had originally brought forth Jack's many abilities. Once there, Scott fought off the guards, but only because he knew that the villain would kill them if he couldn’t stop them first. Fortunately, Charles Xavier arrived, as he saw the video footage of the incident at the construction site and used his mutant detection system to learn of their location. In battle against Xavier, Jack tried to absorb more and more nuclear radiation to the point where he overtaxed himself and was atomized. Scott blamed himself for the man's death.

Xavier took in the boy and explained to him his dream of building a team of mutant operatives, fighting for peaceful coexistence. Scott agreed to join and became the first official X-Man under the codename Cyclops. Xavier also provided his costume with a visor made of ruby quartz that could keep his dangerous power at bay, but also control it using a series of lenses adjusted by dials on his temples. [X-Men (1st series) #38-42]

In the next months, he and Xavier recruited three other young mutants — Bobby Drake, Warren Worthington and Hank McCoy — and formed the X-Men. Xavier's young ward, Jean Grey, joined 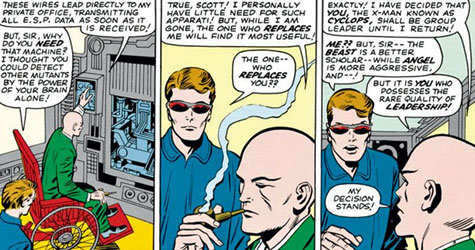 Secretly, Scott cared deeply for his teammate, Jean, but didn't dare to admit his love, because leadership required his full attention and he did not want private feelings for a member of his team to influence his decisions. He also worried that he could injure a lover with his uncontrollable optic beam and the fact that the handsome Angel flirted heavily with Jean did not help matters either. One day, Scott was trying to compose his thoughts in a letter to Jean when Beast burst in, battered and bruised by a mob of humans that attacked him just for being a mutant. [X-Men (1st series) #8]

Hank was on the verge of quitting the X-Men when an older version of Hank appeared via time travel. Weary, haunted and covered in blue fur, the aged Beast spoke of a future in dire peril. He wanted Scott to come with him to the future and confront his own older self before he sparked off a mutant genocide. Even that wasn't as shocking as Beast's next statement... that the future Cyclops had killed Professor X. Scott was confused and furious by Beast's theatrics, but the original five X-Men agreed to accompany Beast into the future to see this darkest timeline for themselves. [All-New X-Men (1st series) #1-2]