1) This is the standard training uniform Xavier gave the original X-Men when they joined the team. Cyclops was the first recruit and, as such, the first to wear the uniform. The earliest version of Cyclops's visor had a pair of studs on the sides that Scott needed to push to open it, but it was soon replaced by a model that reacted to Cyclops pressing certain contact points in his gloves. [X-Men (1st series) #1]

O5-1) After coming to the present, Cyclops and the original five X-Men eventually adopted new uniforms. Based on a general visible theme, Scott's costume was a mix of light blue, white and black segments made of what appeared to be lightweight and flexible armor. He ditched the head stocking and kept his face exposed except for his visor. [All-New X-Men (1st series) #18]

O5-2) Young Cyclops's next costume was a primarily blue suit with a yellow 'X' in a circle on his chest. Lines extended out from the circle in the shape of a larger 'X' design, leading to yellow stripes down his outer arms and legs, leading to yellow boots and gloves. Some versions of this costume moved the yellow 'X' from the center of his chest to the left shoulder. [All-New X-Men (2nd series) #4]

O5-3) Cyclops' final future costume was a darker mix of blue and black, with some yellow trim. He had a yellow 'X' over his left shoulder, blue boots with a yellow 'X' design, and a similar set of fingerless gloves. [X-Men: Blue #1]

-) Jean Grey later redesigned the training uniforms and, while hers changed into a more feminine version, the ones the male X-Men wore more or less stayed the same. She only added a red belt and adjusted the yellow shirts so they no longer covered the entire upper body. [X-Men (1st series) #27] 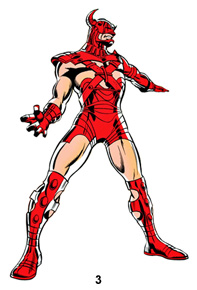 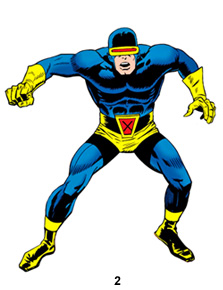 2) After the team had proved themselves in battle time and again, Xavier rewarded them with individualized costumes. This set was again designed by Jean, whom Xavier had secretly told of this plan before. Cyclops wore this rather simple outfit for the rest of his initial stint with the X-Men. [X-Men (1st series) #39]

3) To infiltrate a villain organization, Cyclops came up with the cover identity of Eric the Red. Special circuits built into the helmet redirected his optic beams, making it seem as if they originated from his hands. [X-Men (1st series) #51-52] Of course, once the organization was defeated, Cyclops returned to his actual costume, while the Eric the Red identity was later used by two opponents of the X-Men. 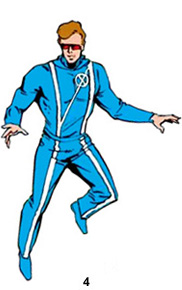 4/5) Long months later, when the original five X-Men reunited, they came up with the idea of X-Factor. To the media, they acted as a mutant hunting group, while secretly they were trying to help mutants to handle their powers. Scott's teammates wore similar dark shades so that his wouldn't stick out and blow his cover. In situations that required the use of their powers, the team used the cover identities of the "X-Terminators," along with a new set of costumes. Scott's costume was a blue bodysuit with a large yellow "X" that covered his chest and shoulders, as well as yellow boots and gloves. [X-Factor (1st series) #1]

6) After they saved New York from Apocalypse and his Horsemen, X-Factor finally ended their charade and exposed their cover to the media. They became celebrities and a thankful designer, whom the team had rescued earlier that day, created a new look for them. The new costumes were similar to the X-Terminator uniforms but had a different color scheme (in Scott's case, white-on-blue instead of yellow-on-blue. [X-Factor (1st series) #26]

7) Shortly after the X-Tinction Agenda, X-Factor settled for a new team look. Cyclops, Jean and Iceman all wore identical uniforms. Only Archangel and the furry Beast stuck to their looks. This was Scott's first uniform that left always his hair exposed. [X-Factor (1st series) #63] 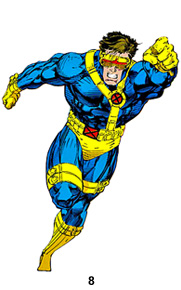 8) Only a few weeks later, X-Factor rejoined the X-Men and again new costumes were in order. [X-Men (2nd series) #1] Another long-lasting look, Cyclops wore this outfit until he merged with Apocalypse during the Twelve incident.

9) After Phoenix and Cable were able to extract Apocalypse's essence from the merged body, Scott returned to the X-Men a changed man. He behaved more ruthlessly, and his new black costume reflected this change in personality. [Uncanny X-Men (1st series) #391]

10) Weeks later, Xavier changed the entire look of his students. Instead of wearing bright costumes, they are now using some leather outfits that resembled street clothes. The X-Men now sported a wide variety of different shirts, coats and jackets. Scott usually opted for a bulky leather jacket with a large yellow "X" over the torso. [Uncanny X-Men (1st series) #394]

11) Cyclops as well as the rest of his team switched back to more traditional superhero outfits to appear more media-friendly. In Cyclops's case, that meant a skintight dark-blue outfit with a skull-cap and prominent visor. Gold-lining accentuated the gloves, boots and shoulders, giving the uniform a style reminiscent of the classic X-Men uniforms. The ensemble was completed with a golden X-belt. [Astonishing X-Men (3rd series) #1]

12) Upon relocating to San Francisco, Cyclops made a few adjustments to his wetsuit outfit. He dropped the belt in favor of a gold clasp over his heart that contained a red "X" within its center. The gold trim on this uniform also ran along the sides in parallel lines instead of converging into a V shape like it did on his last one; the trim now stopped mid-thigh and circled around the backs of his legs, and converged on the clasp on the left side of his chest, from which it splayed into three strands that wrapped around over his left shoulder. This outfit also had much larger cuffs on the wrists and ankles that extended up the forearms and legs. On occasion, Cyclops was known to accessorize this outfit with a functioning jetpack. [Uncanny X-Men (1st series) #500]

13) When the Phoenix Force empowered Cyclops with a fraction of its power, it radically overhauled his appearance. Using the immense power flowing through him, he reshaped his uniform into black bodysuit with a red chevron over the pelvis and a red Phoenix crest that spanned his chest and shoulders. He also refashioned his visor into an upside-down chevron reminiscient of a beak. [Avengers vs. X-Men #5]

14) After Cyclops took the entirety of the Phoenix Force into himself, he went "Dark Phoenix" and transformed his look into one more fitting of his new status. Flames enveloped his body, while veins of raw energy ran over the entirety of his black bodysuit, giving him the appearance of living magma. The Phoenix crest still splayed out over his chest and shoulders, but glowed a crackling bright white instead of red. With his optic blasts now fully under his control, Cyclops abandoned his trademark skullcap and visor and left his glowing red eyes exposed. [Avengers vs. X-Men #11]

15) Shortly after reinventing himself as a mutant revolutionary, Cyclops began sporting a dark burgundy bodysuit trimmed with thick red lines in a glyph-like pattern. This red trim also encircled his neck, and he wore this uniform with a utility belt clasped with a red X. Finally, in a dramatic departure from his usual look, Cyke dropped the conventional horizontally oriented ruby-quartz visor in favor of an X-shaped visor that criss-crossed his eyes. [Uncanny X-Men (3rd series) #1]

--) During the Final Incursion, Cyclops merged with the Phoenix Force once again and became its avatar one last time. He retained the red X-shaped visor over his eyes, but his bodysuit changed from burgundy to white, while the red Phoenix crest over his chest and shoulders enlarged to cover almost his entire body; only his neck, gloves and lower legs showed the white color of his bodysuit. [Secret Wars #1]

--) Since his return from the dead, Cyclops has cycled through several costumes, from the mutant revolution costume he died in, back to the Astonishing era look, and currently his 90's strike force attire.