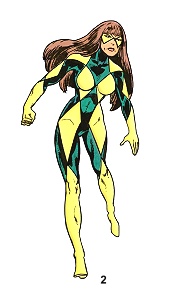 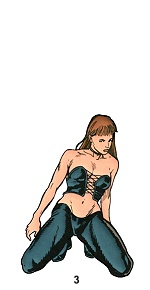 2) Lil was wearing her first individual outfit when Omega Flight made its debut. Basically a green bodysuit, it featured a number of yellow, diamond-shaped areas, accentuating her breasts, shoulders, and hips. At her knees and elbows, the yellow ornamentals perfectly connected with the boots and gloves of the same color. A domino mask in the same color scheme completed the costume, which became Diamond Lil’s most recognizable uniform. [Alpha Flight (1st series) #11]

3) Deciding it was time for a change and wanting to show off her perfect body, Lil changed to this black leather outfit at one point. [Alpha Flight (1st series) #87] 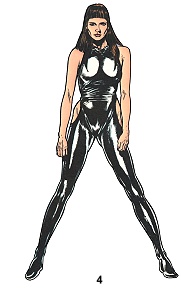 4) Right after she told her teammates of the lump in her breast, Lil changed her costume. While it was still skintight, the chest area was now entirely covered. The bodysuit, that was either made of black leather or latex, had diamond-shaped cutouts on her thighs, and another big one in the back. [Alpha Flight (1st series) #97]