Manuel Alfonso Rodrigo de la Rocha was born into a wealthy, noble family from the historic region of Castile, Spain. Manuel’s family was able to trace their lineage back to ancient Rome, giving him an inflated ego even before he discovered he was homo superior. His mutant ability to control other people’s emotions manifested at an unusually young age. No matter how terrible Manuel acted, his powers allowed him to receive nothing but adoration and love from those around him. In addition, Manuel often felt overwhelmed by the conflicting emotions of others. To cope, Manuel would often hone in on a single emotion and intensify it to block out the others. A lack of genuine social feedback combined with an excuse to use his intrusive powers so brazenly resulted in Manuel becoming a sadistic sociopath. [New Mutants (1st series) #62, Hellions #1]

When he was a teenager, Manuel was recruited by Emma Frost, the White Queen of the Hellfire Club, and enrolled at her Massachusetts Academy. On the surface, the Massachusetts Academy was a prestigious boarding school but in reality, it was owned and operated by the Hellfire Club’s Inner Circle, a group of mutants that used the influence and power of the elite social club in their plans for mutant domination. Outside of the academy’s normal student body existed a group of 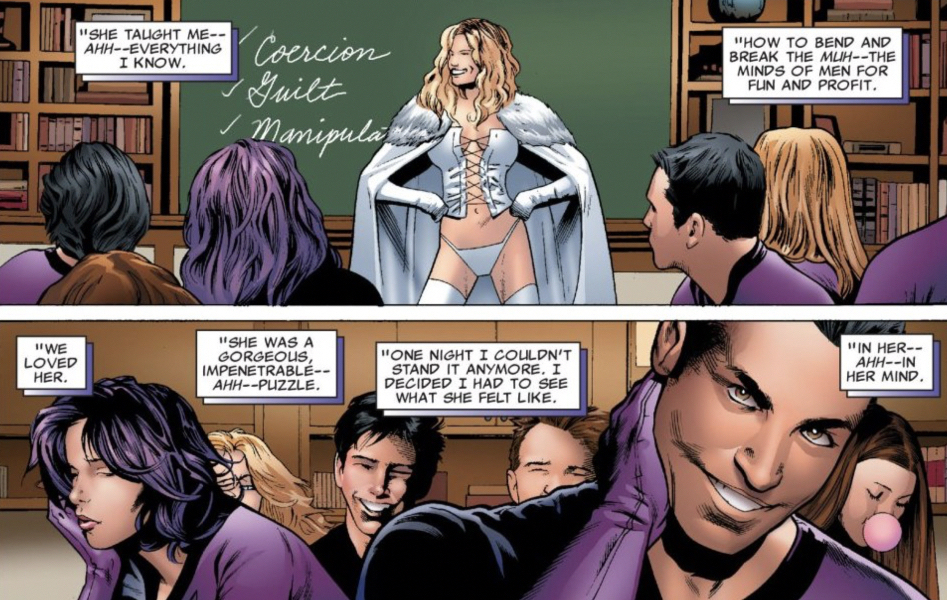 young mutants who were covertly trained to become useful assets for the club. Taking the codename Empath, Manuel was an original member of this mutant team who were named the Hellions.

Over time, Manny developed an unhealthy fascination with Emma Frost. In some ways as cruel as he was, Manuel idolized his new mentor and the way she ruthlessly manipulated others using her telepathic powers. Emma kept her emotions closely guarded which tempted Manuel to learn more about who she was behind her ice cold demeanor. Curiosity eventually got the better of him and he snuck into her bedroom to try to peek inside her head. Emma caught him and offered him a glimpse into her “perfect” mind, fueling his obsession for years to come. [Uncanny X-Men (1st series) #502]

When Emma Frost captured Kitty Pryde of the X-Men, the Hellions had their first throw-down with the team that would become their fierce rivals—the New Mutants, the younger students of the Xavier 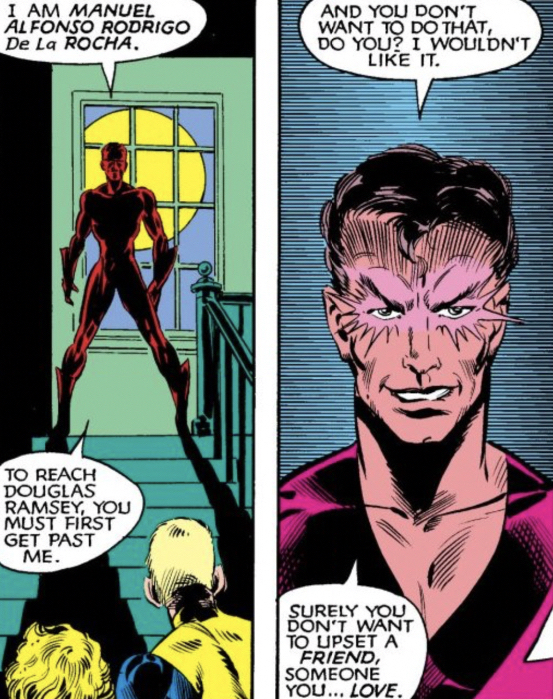 Institute who took it upon themselves to rescue Kitty from the Massachusetts Academy. The Hellions reveled in their first taste of battle but none more so than Empath. During the fight, Empath used his powers on the New Mutant Amara Aquilla, codenamed Magma, causing the girl to shoot her lava bolts wildly and injuring his fellow Hellion Jetstream who almost fell to his death.

After the battle, Jetstream attacked Empath for his carelessness but it took little effort for Empath to use his powers to stop Jetstream and force him to apologize. Before he could go any further in punishing Jetstream for laying hands on him, Emma intervened. Empath freed Jetstream but casually dismissed Emma’s warning about disregarding his teammates. Seeing his arrogance on full display, Emma realized Empath would be a challenging pupil but couldn’t help but also recognize that his dangerous ambitions and confidence made him a perfect fit for the Hellfire Club. [New Mutants (1st series) #16-17]

Seeking revenge against the X-Men for the death of his older brother, Thunderbird of the Hellions lured the X-Men to the NORAD military base where he planned to kill Professor X. Eager to join in on the fun, Empath followed him there, bringing along fellow Hellion Roulette and the newest Massachusetts Academy recruit—Firestar. Perhaps jealous of the special attention Emma paid her,

Empath made a point to torment Firestar even moreso than the other students. [Firestar #2-3] After using his powers to make her fall madly in love with him, he convinced her that they were on a special mission from the White Queen. Thunderbird dismissed their help but that didn’t stop them from joining the assault when the X-Men arrived. Attacking Professor X, Empath nearly defeated the powerful telepath in mental combat due to the X-Men leader’s recent injuries. After that, Empath used his abilities to stir NORAD’s military officers into a panic, causing them to use lethal force against the X-Men. The X-Men caught on and captured Empath, who fainted immediately at the sight of Wolverine’s claws. [Uncanny X-Men (1st series) #193]

Back at the Massachusetts Academy, Emma Frost scolded Empath for his manipulation of Firestar. 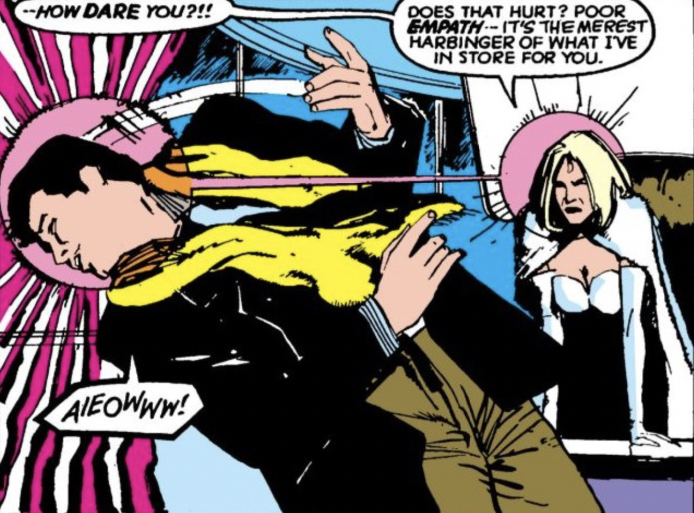 Unapologetic and not accustomed to being disciplined, Manuel boldly used his empathic powers on Emma to turn her rage into love—or so he thought. Emma only played along to see how ambitious her unruly student truly was and then viciously turned the tables by placing psychic blocks in Empath’s mind that prohibited him from accessing his powers. [New Mutants (1st series) #26]

Now seeking revenge against the X-Men for his troubles, he made contact with the Gladiators, a group of people who organized deadly underground mutant fights, and provided them with information on the New Mutants so they could kidnap them. [New Mutants (1st series) #28] Eventually, Emma removed the psychic blocks so Empath could assist in her latest scheme to recruit the New Mutants. Having been murdered and resurrected by the god-like being known as the Beyonder, the New Mutants were left severely traumatized, behaving like zombies with no emotion. Their new headmaster, Magneto, was unsure how to help them and Empath used his abilities to amplify Magneto’s doubt and helplessness until he felt he had no choice but to send them to the Massachusetts Academy, hoping that Emma may succeed where he could not. 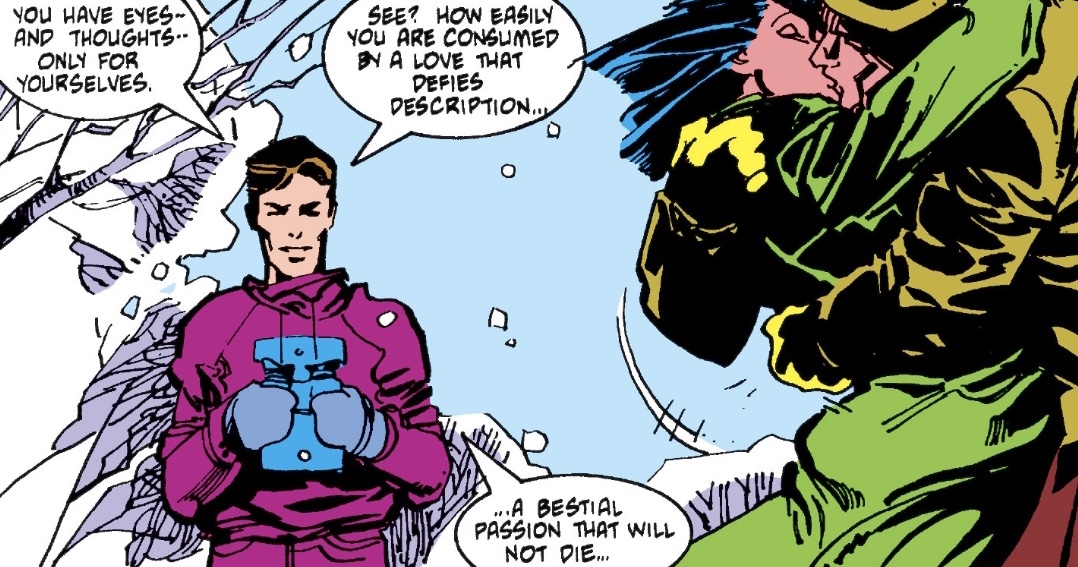 While he was spying on the Xavier Institute to complete this mission, Empath was caught by Tom Corsi and Sharon Friedlander, two of the X-Men’s human allies. In the most vile use of his powers yet, Empath twisted Tom and Sharon’s attraction to each other into a bestial passion. Magneto found the pair days later, broken and addicted to pleasure, and realized he had also been manipulated by Empath. He went to the Massachusetts Academy to retrieve the New Mutants and after working together with Emma to heal them, he took his students home. [New Mutants (1st series) #38-40]

Weeks passed before Tom and Sharon showed any signs of recovery and seeing the tragic effect Empath’s attack had on their teachers, the New Mutants sought revenge. Kidnapping Manny from the Massachusetts Academy, Magik took him to Limbo, the demonic dimension she was able to access due to her mutant powers. Since the sorceress New Mutant was immune to his powers, Empath was quite fearful of her and Magik enjoyed taking advantage of that any chance she could. [New Mutants (1st series) #39, 53] After Magik had her fun with him in Limbo, the rest of the New 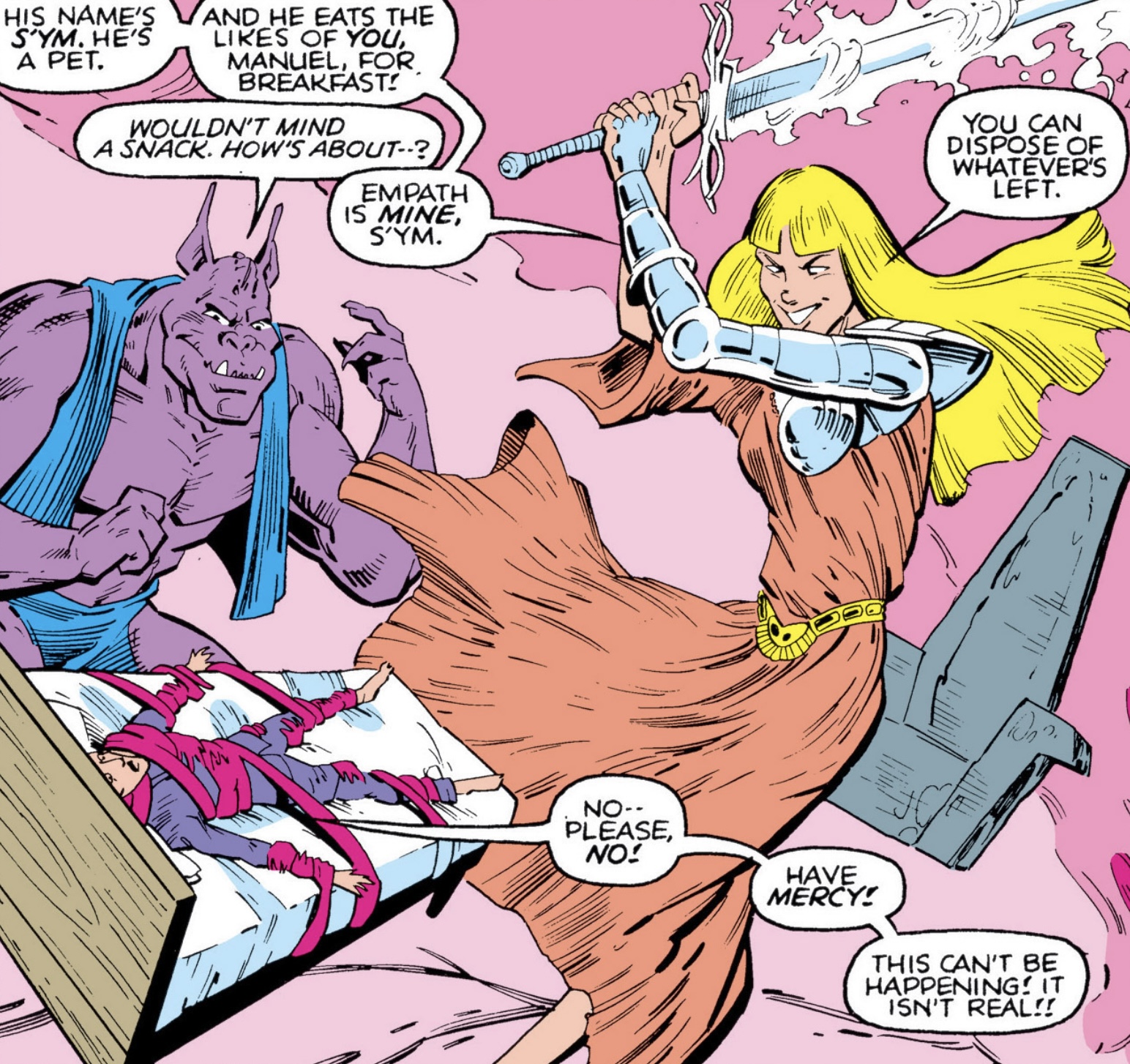 Mutants took turns tormenting Manny with their powers in an abandoned house near the school. They eventually pulled back, arguing over how far they were willing to go with the hotheaded Sunspot particularly hostile. Luckily for Empath, the Hellions, led by Thunderbird, arrived. Although they had no love for Empath and agreed with their rivals that he deserved some payback, he was their teammate nonetheless and they rescued him from any further torture. When the New Mutants departed and it was clear that Empath hadn’t learned anything from the ordeal, Thunderbird punched him across the face and warned him that he would be be keeping him in line moving forward. [New Mutants (1st series) #43]

Surprisingly, Empath did have room in his heart for affection and throughout the course of his interactions with the New Mutants, he grew very fond of Magma. Amara was the daughter of a prominent senator in the hidden city of Nova Roma and had a similar upbringing as Manny; both raised in upper class families and used to the finer things in life. When the New Mutants and 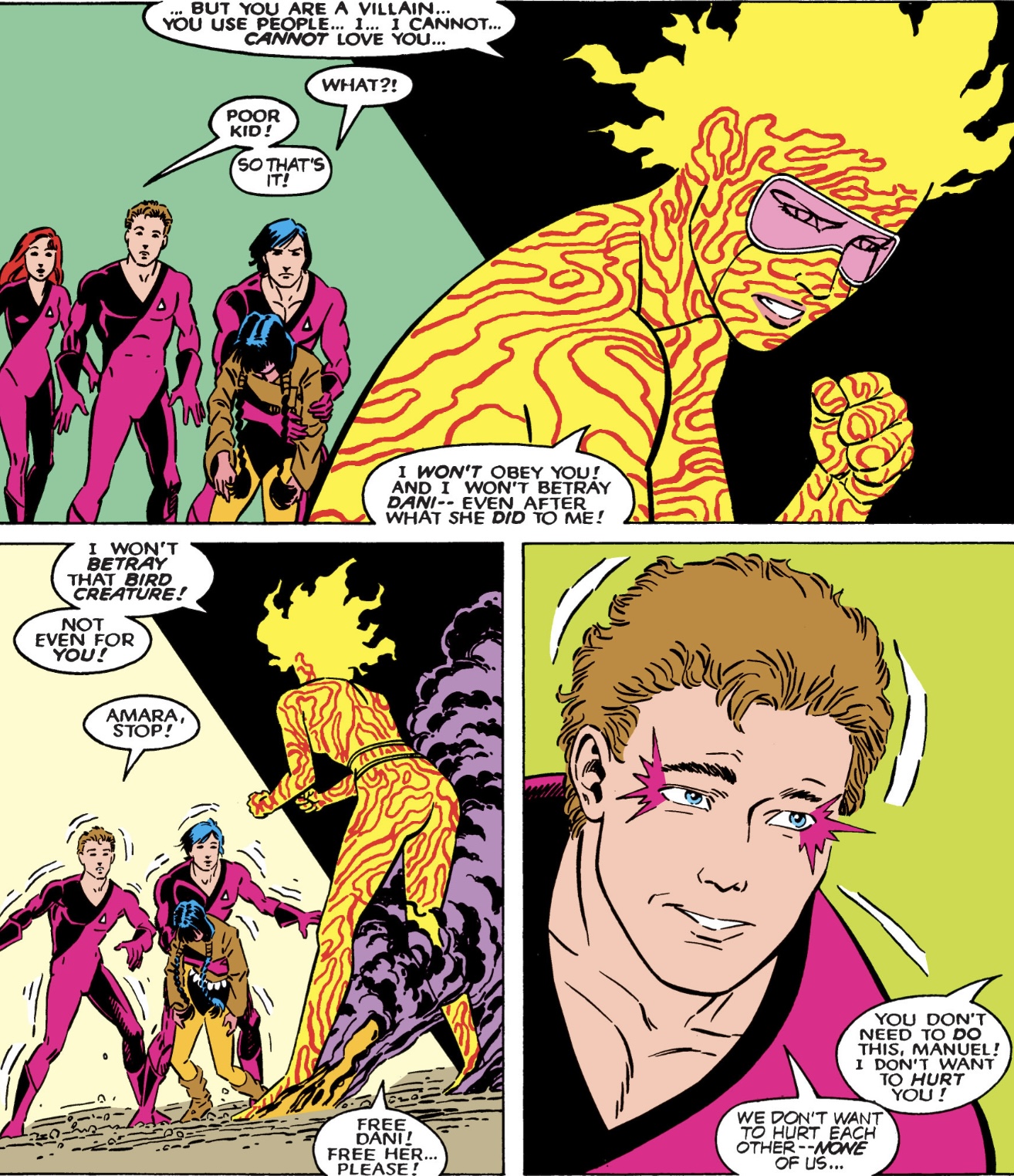 Hellions came into conflict over capturing the mysterious creature known as Bird Boy, Emma Frost entrusted Empath with a secret mission to lure Magma over to the Hellions. Magma was already questioning her place with the New Mutants and wondering if the Massachusetts Academy was a better fit for her. She had also developed a crush on Manny, something she felt extremely conflicted about. Instead of swaying her decision using his powers, Empath showed her a different side of him during the battle when he forced Thunderbird to release the New Mutant’s leader Moonstar. This simple act of kindness was all it took to convince Magma that perhaps Empath was misunderstood and it served as the final incentive she needed to transfer schools. [New Mutants (1st series) #56]