The next time Empath was free, he was living on the mutant island nation of Krakoa. Founded by Professor Xavier and Magneto, Krakoa ushered in a bright new era for mutantkind where they were able to thrive and live safely like never before. In addition, a group of mutants called The Five had learned how to combine their powers to conquer death. All of the Hellions were resurrected and Manny lived among his former teammates in the Akademos Habitat, an area which housed many of the “younger” generations of mutants including the former New Mutants.

Sadly, Manny did not use this as an opportunity for a fresh start. He resorted to his old ways, using his powers to torment everyone around him for his amusement. For his behavior, he was brought before the Quiet Council, the leaders of Krakoa, along with various other mutant troublemakers and misfits. It was decided that a new team be formed for dangerous missions that would give these “problem mutants” a chance to express their mutant gifts for the good of Krakoa. They would be led by Mr. Sinister and would adopt the name Hellions. 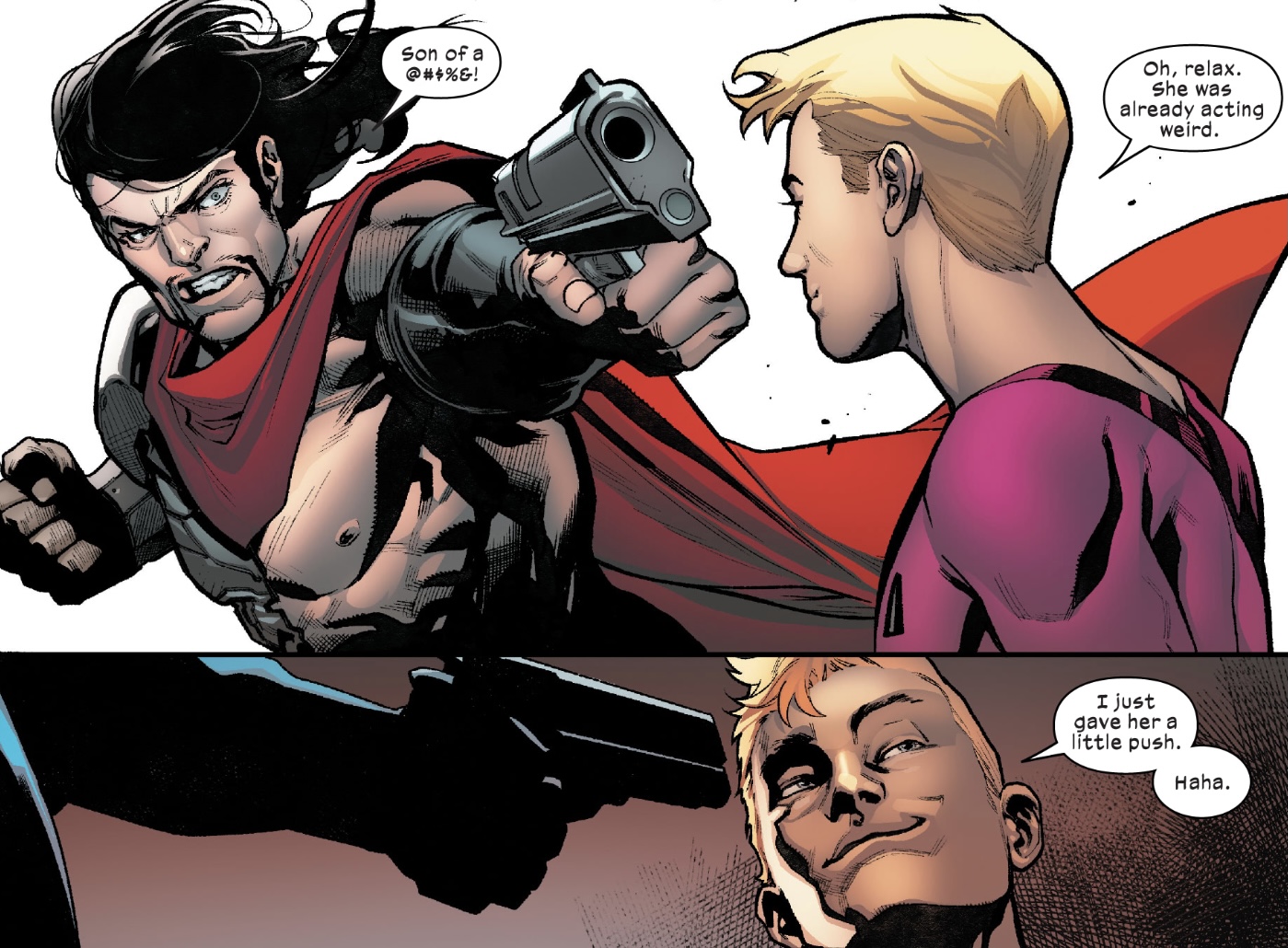 Psylocke was chosen as the Hellion’s field leader and among his new teammates were Greycrow, a former member of Sinister’s mutant mercenary group the Marauders; and Havok, a once trustworthy X-Man who had been experiencing unusual violent episodes of late. Their first mission was to destroy one of Sinister’s outdated clone farms and before they embarked, Greycrow took Empath aside to warn him that he would kill Manny if he caught him using his powers on a teammate. Manny didn’t take him seriously but he should have. Moments after arriving, he messed with the mind of their teammate Nanny and Greycrow shot him dead without hesitation. [Hellions #1-2]

Empath was resurrected by The Five just in time for the Hellions’ next mission. Orchestrated by Luna Opal Saturnyne, the Omniversal Majestrix, Krakoa had found itself in a crossdimensional tournament with the lost land of Arakko. The stakes were high and the Hellions were tasked triggering a forfeit by stealing the ten chosen swords that Arakko would need to use in the contest. In order to get to Arakko, they would have to travel through Otherworld and for this particular mission, the Quiet Council voted to have Sinister lead the team himself. 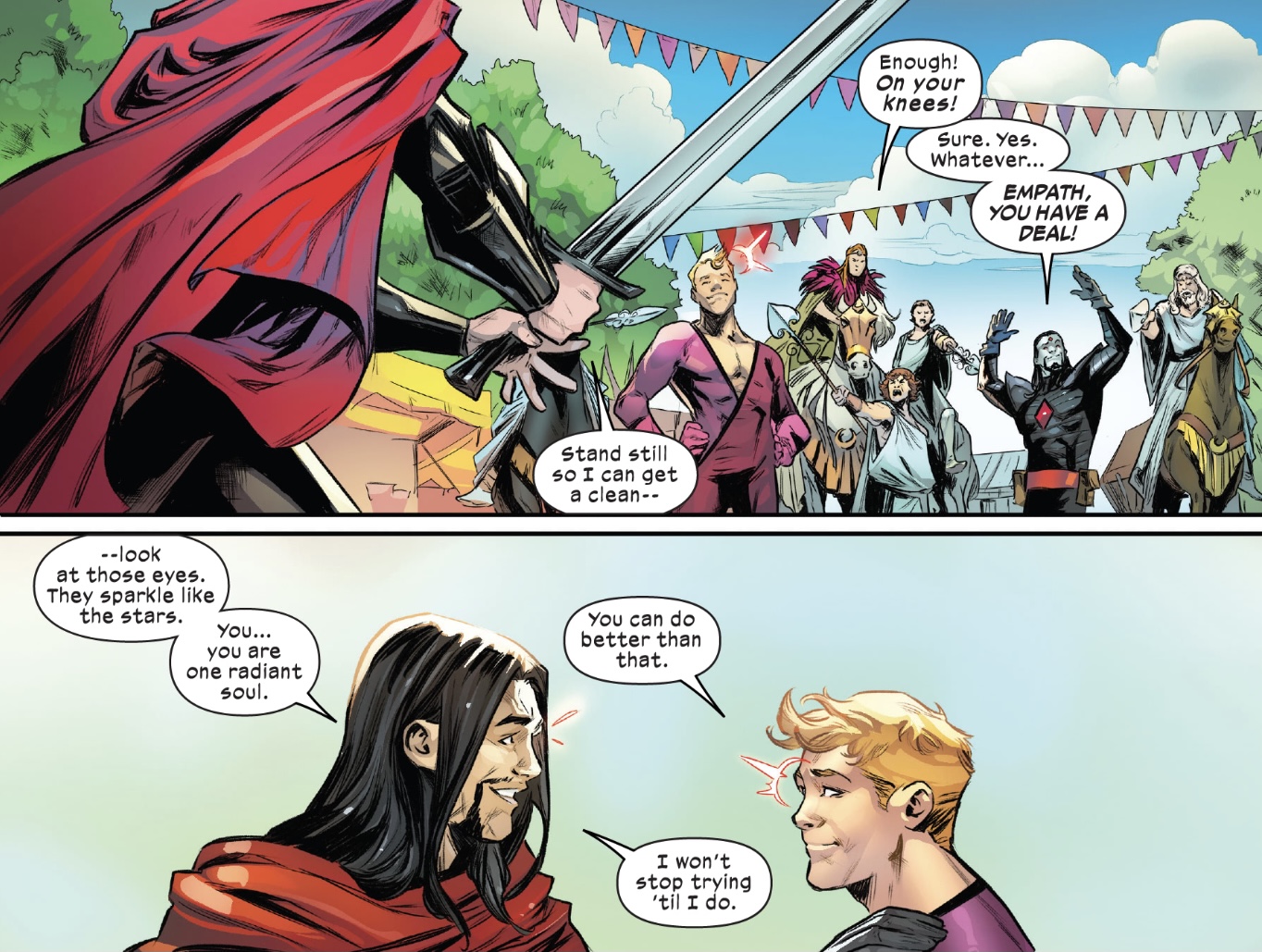 Once in Otherworld, it didn’t take long before the Hellions drew the attention of Saturnyne’s forces. Empath refused to assist the team until Sinister gave him permission to make Greycrow his pet. After that, Empath easily persuaded Saturnyne’s soliders to allow them to pass and relished in his revenge for his murder by making Greycrow his fawning servant as the team made their way to Arakko.

After a long and cruel journey, the Hellions arrived in Arakko but were in no shape for what awaited them. When it was discovered that Sinister’s true motives for going to Arakko were to collect genetic samples from the mutants that lived there, they were viciously attacked by one of Arakko’s leaders, Tarn, and his underlings, the Locus Vile. Empath and the other surviving Hellions fled, barely making it back to the Krakoan gate. Exhaustion settling in after dispatching more guards, Manny’s control over Greycrow slipped and his teammate angrily stabbed him in the gut before passing through the gateway. Dying in Otherworld affected the resurrection process in strange ways but luckily Empath crawled his way through the gate before succumbing to his injury. [Hellions #5-6, X of Swords crossover]

[Note: It turned out that Sinister actually send a clone in his place for the mission to Arakko. The few Hellions that made it back to Krakoa alive were killed immediately by the actual Sinister and therefore the Hellions did not remember the details of this tragic mission upon being resurrected by the Five but they became highly suspicious…]

The Hellions were then sent to infiltrate a base of the anti-group the Right. When the Right's leader Cameron Hodge and his “Smiley Face” robot soldiers began to overwhelm the team, Empath cowardly fled the battle. He was retrieved by the Right robots and taken before Hodge where he was brutally beaten. When Empath’s attempts at controlling Hodge failed, he realized that Hodge wasn’t Hodge at all but a robot that believed he was the former Right commander. This revelation ultimately led to the Right soldiers turning on the Hodge pretender. Although he died from his injuries, Manny was instrumental in the mission’s success and so earned some burgeoning respect from Greycrow; somewhat squashing their beef for the time being. [Hellions #7-8] 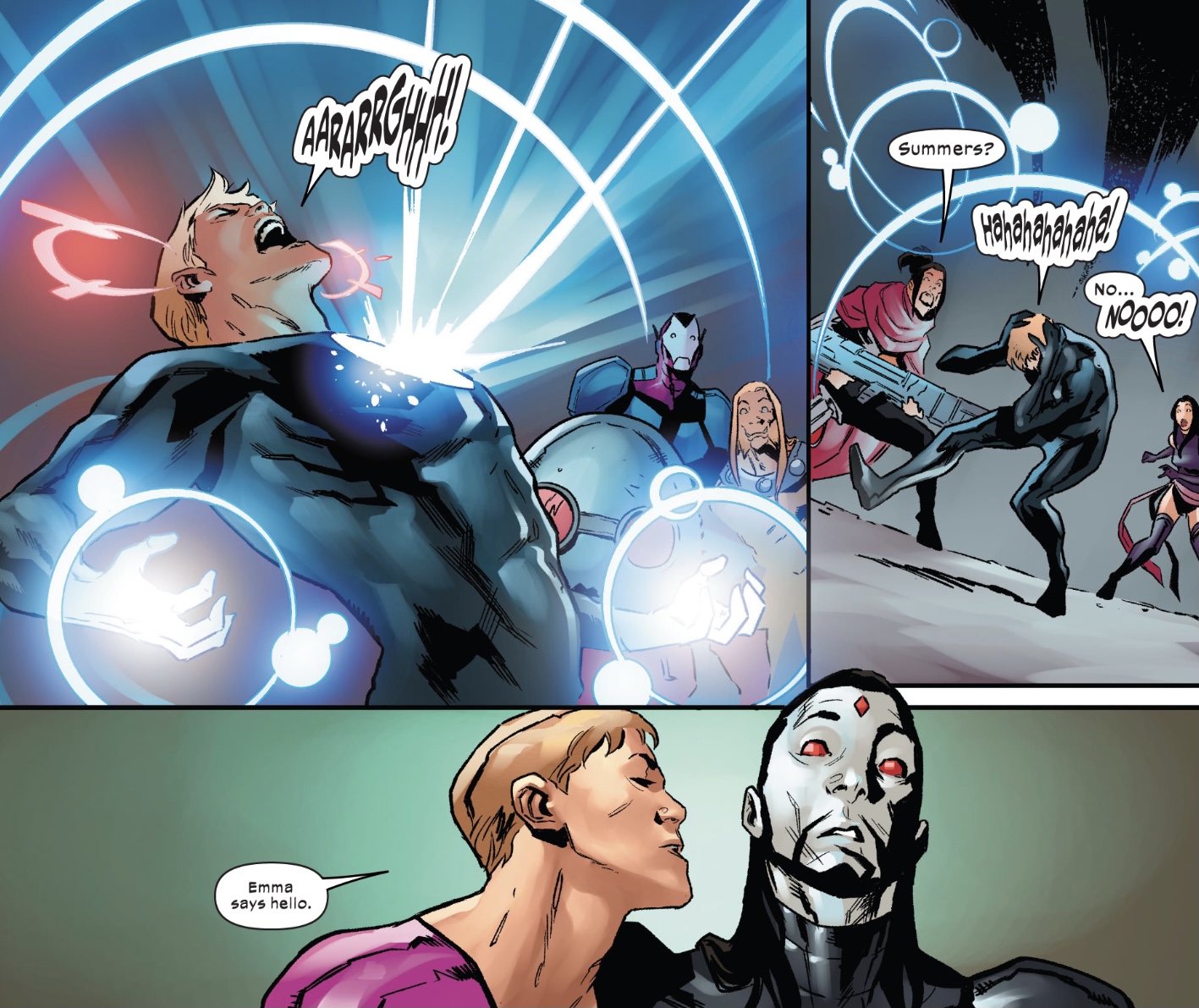 At some point or perhaps even just as the Hellions were formed, Emma Frost approached Manuel about being her inside man. Empath’s former teacher was now a member of the Quiet Council, naturally, and wanted to keep an eye on Sinister. Emma was right to have concerns as Sinister had secretly build a cloning facility and was using the genetic material he obtained from Arakko to create a powerful chimera using his and Tarn’s DNA. The Hellions discovered this for themselves when Tarn and his Locus Vile sought revenge against Sinister for his thievery. They planned to destroy the facility until Psylocke informed that a digital backup of her deceased daughter was being kept there. The Hellions understandably pulled back… except for Empath. Ignoring Psylocke’s pleas and obeying Emma’s wishes, Empath used his powers to unleash Havok’s “dark side” and the facility was reduced to rubble by a plasma blast. [Hellions #13-15] 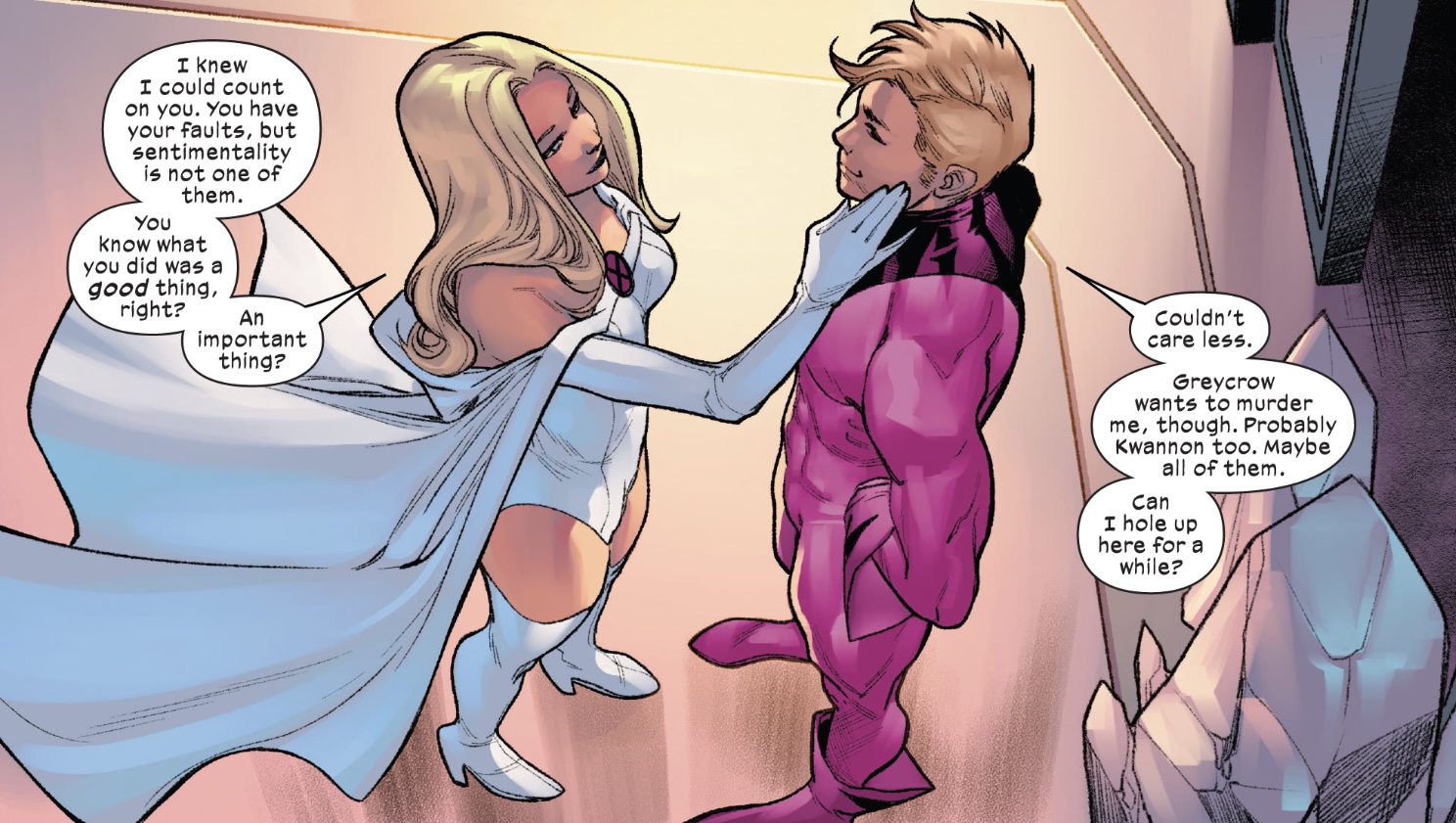 Back on Krakoa, Emma thanked Empath for his services and allowed him to stay at her White Palace until the Hellions cooled down. They were furious at Empath, especially Greycrow who had grown strong feelings for Psylocke. When the team went to save their teammate Orphan-Maker who had gone rogue, Empath tried to tag along but was told to “@#$% off.”

Instead he betrayed his team once again by aiding the X-Men in taking them down when the Hellions tried defending Orphan-Maker. For his services, Empath had gained the gratitude of the Quiet Council but while most of the Hellions had forged lasting connections, Empath was alone as 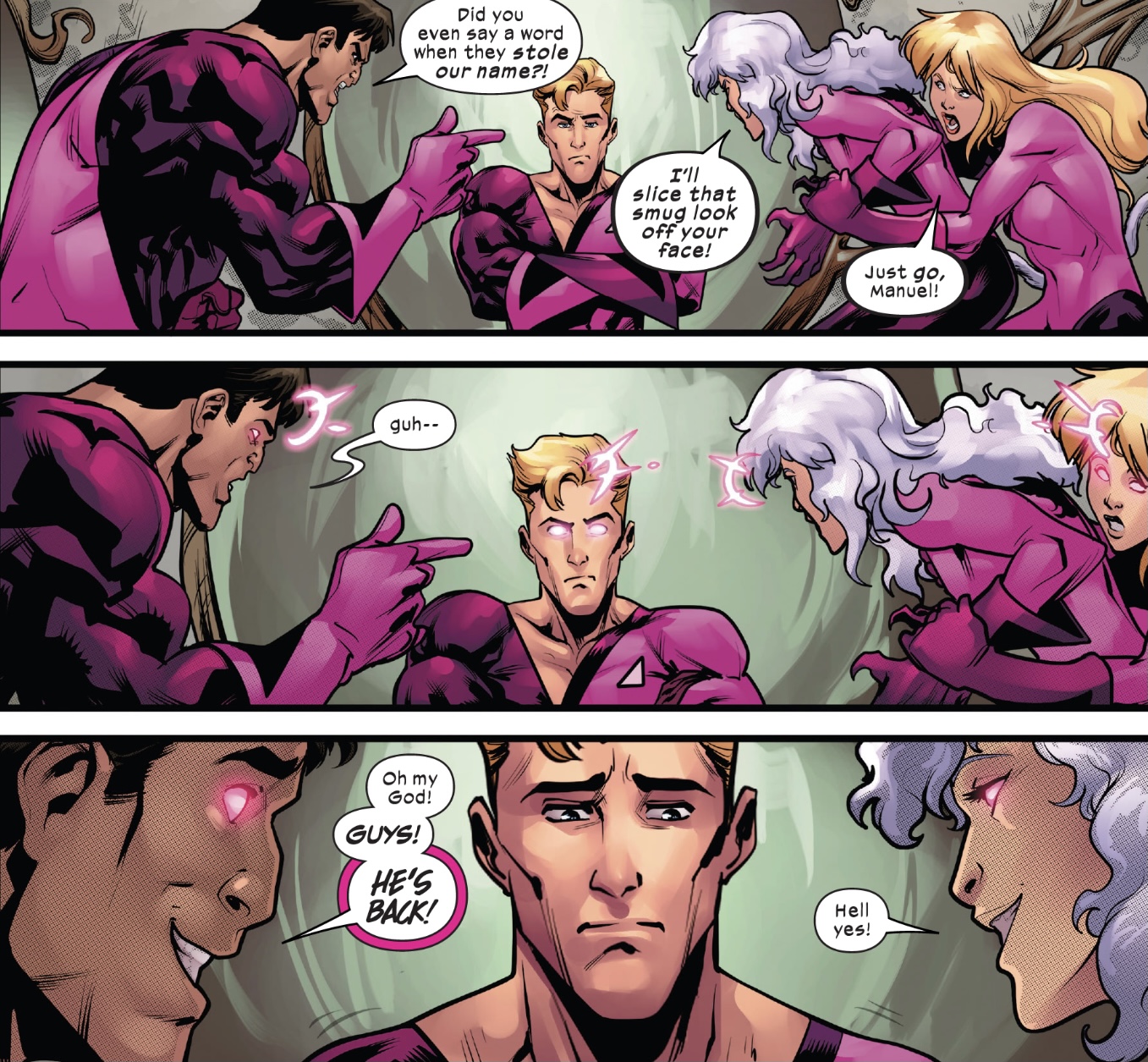 ever. The Hellions were disbanded and Manny slunk back to the Akedemos Habitat where he received a cold welcome from his peers… until he used his powers to make them love him. [Hellions #16-18]

Manuel may act like he doesn’t need others but his antisocial ways are clearly causing him deep sorrow. Whether or not he’s learned a lesson about friendship from his time with the new Hellions remains to be seen but we probably shouldn’t hold our breath.