Unlike with the other Hellions, Empath didn’t like using the full force of his powers on Magma, often going easy on her in practice sessions. Despite this, Magma still pushed him away as she saw firsthand how he tormented others, particularly the Hellion Tarot who had also developed a crush on him. Emma commended him for his restraint but informed Empath that he was still subtly using his abilities on Amara, something Empath had not realized. When Amara’s father commanded her to return to Nova Roma, Emma sent Empath with her. Located in the Amazon, Nova Roma was a city of great mineralogical wealth and the Hellfire Club had taken a special interest in it. Empath was to convince Magma’s father to allow her to stay at the Massachusetts Academy and gain him as a new ally to the Hellfire Club. 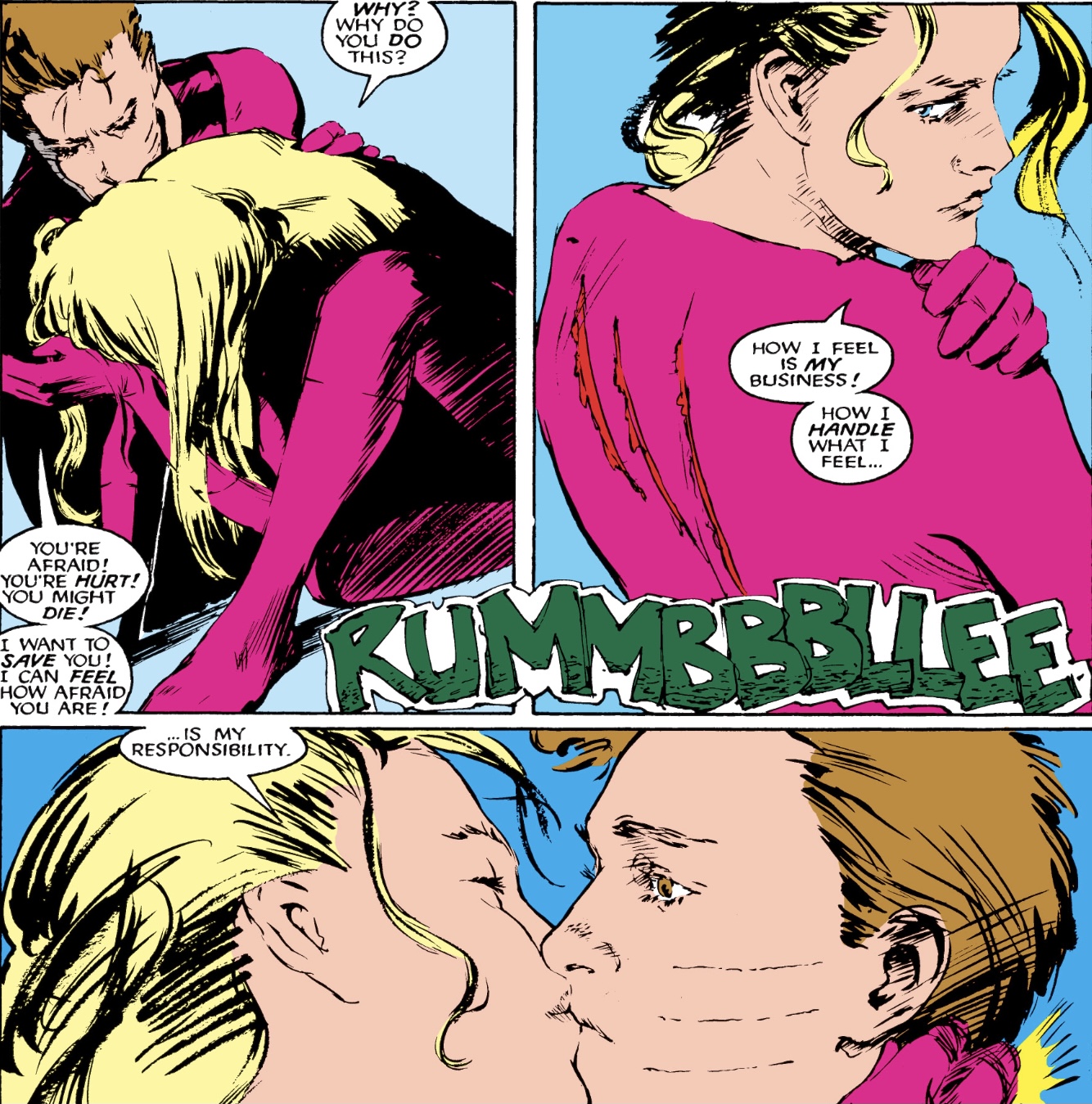 En route to Nova Roma, Empath and Magma’s plane crashed in a storm and they spent several days struggling to survive in the rain forest. Eventually, Manny realized that Amara was purposely preventing them from being rescued, delaying her return home because she knew her father had an arranged marriage awaiting her. Angry, Empath used his abilities to force her to create a fiery volcano large enough that they would be noticed. In the process, Amara passionately kissed him but Manny was unsure if it was caused by his powers or her genuine feelings for him.

After they escaped the raging fire Magma created, Empath apologized and confided in her, explaining how his powers worked and how overwhelming the emotions of others could be. Working together, they reached Nova Roma where Magma introduced Empath to her father as a friend. [New Mutants (1st series) #62]

Empath and Magma remained in Nova Roma for some time. When the High Evolutionary and his scientists kidnapped Magma for his experiments, Empath contacted Emma Frost so the Hellfire Club could rescue her. When Magma was returned safe and sound, Magma’s father was grateful to the Hellfire Club and this seemingly caused him to call off Magma’s betrothal. [New Mutants Annual #4] Luckily, Empath and Magma stayed in Nova Roma and therefore were not present when the time traveling mutant Trevor Fitzroy attacked the Hellfire Club with sentinels, murdering most of the Hellions and putting Emma Frost into a coma. [Uncanny X-Men (1st series) #281-282]

[Note: Empath does in fact appear in Uncanny X-Men #281 amongst the Hellions who are killed during Fitzroy’s attack. Since many never-before-seen Hellions show up in this story, this error could be “no-prized” with the idea that there was another Hellion with similar powers to Empath who adopted the name while Manuel was in Nova Roma.]

Some time later, Thunderbird and former New Mutant Cannonball, both now members of the mutant group X-Force, travelled to Nova Roma along with Firestar so that they could break the news of the Hellions’ deaths to Empath and Magma. They were welcomed with open arms but were suspicious at Empath and Magma’s lack of reaction upon learning of the tragedy that befell their old 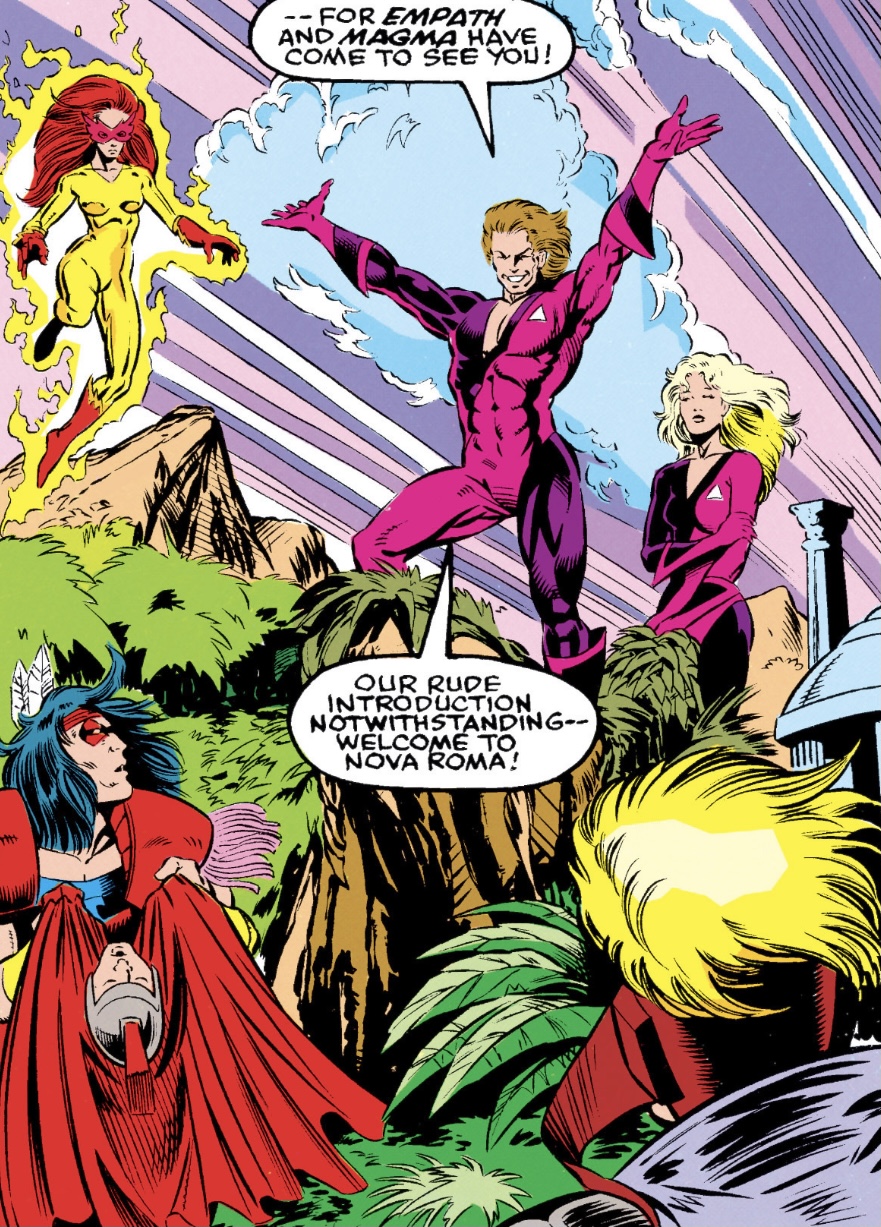 teammates. Having experienced Empath’s powers firsthand, Firestar immediately recognized that Empath was not just influencing Magma but had the entire population of Nova Roma under his sway.

Before she could investigate further, Firestar was attacked by Empath who now had Thunderbird and Cannonball under his control as well. Much to his frustration, Empath’s powers no longer had any effect on Firestar due to the greater control she had over her microwave-based emissions. Ignoring Empath’s desperate pleas to leave things the way they were, Firestar released a microwave pulse that scrambled Empath’s mind waves and freed the city from his thrall. Then the “truth” came out…

Nova Roma was thought to be a city founded by ancient Roman settlers who had fled Rome before its downfall and had existed for centuries deep in the Amazon where it was left untouched by the modern world. During his time living there, Empath had discovered this was actually an elaborate lie orchestrated by the immortal mutant Selene. Selene had Nova Roma built and populated it with people she kidnapped and mind-wiped, all so she could relive her glory days in ancient Rome. With Selene gone, her spell was fading. Feeling happy for the first time in his life, Empath used his powers to keep the people of Nova Roma content and Selene’s brainwashing active.

Now that the truth was revealed, Empath informed Amara that she was actually a British-born girl named Allison Crestmere. He promised her and the other citizens of Nova Roma that he would work with them to restore their real memories and help them reclaim their lives, even if it meant giving up his happiness there. [New Warriors (1st series) #31]

[Note: Later stories would reveal that Empath lied and Nova Roma was in fact an offshoot colony of ancient Rome. His reasoning has yet to be revealed and it’s unclear if he was following orders from someone else or was simply causing trouble on his own. After all, Manuel has never needed an excuse to mess with people’s heads…]

The Brazilian government got involved in the Nova Roma victim’s recovery process, setting up a resettlement camp outside the city. Empath honored his promise and stayed behind to help, working closely with Amara/Allison who was having difficulties with her memories. Unfortunately the pair were pulled into the affairs of mutantkind once again when the Upstarts, a mysterious group of 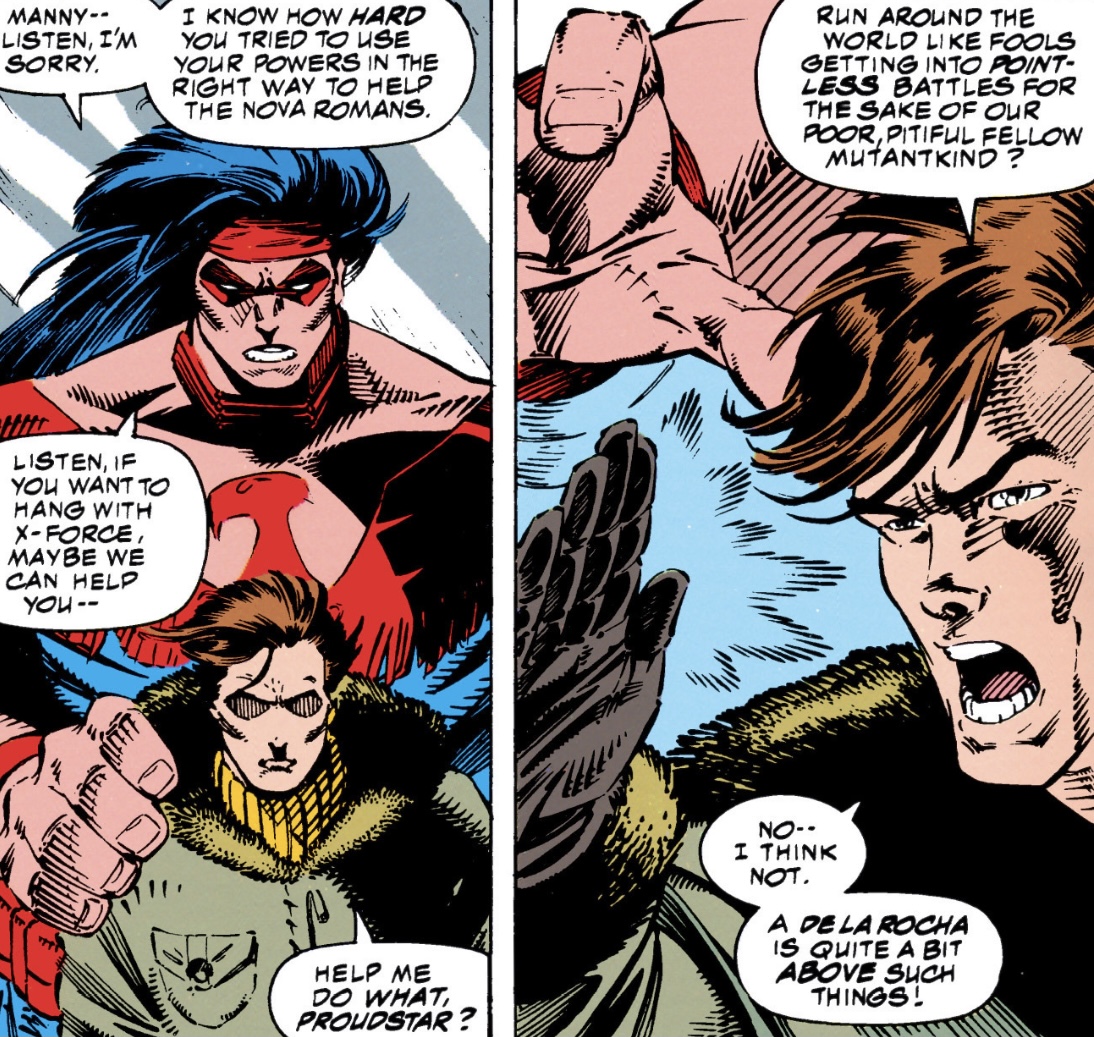 powerful and wealthy people who hunted mutants as part of twisted competition, began targeting former New Mutants and Hellions. Magma was kidnapped but Empath was rescued by Dani Moonstar. Empath worked alongside X-Force, which at the time mostly consisted of his former enemies, the New Mutants, to rescue Magma and many others and shut down the Upstarts’ bizarre contest. In the aftermath, Magma decided to go to England to find her real parents. She broke up with Manny, still angry at him for continuing the facade of Nova Roma after discovering it was a lie. Thunderbird, now using the name Warpath, invited Empath to join X-Force but Empath refused, claiming that he was above super hero teams and that losing Magma meant losing his only reason for redemption. [Child’s Play crossover, X-Force (1st series) #34]

Empath fell off the grid for quite some time after this but resurfaced as the Communications Director of X-Corp’s L.A. division. Founded by Professor X, X-Corp was an international organization set up to protect mutant rights and promote mutant outreach. X-Corp L.A. was led by Sunspot and despite their history, Empath and Sunspot worked well together. Sunspot even encouraged Empath to use

his powers to spin events in their favor and defended him when Magma visited the office. Magma still hadn’t forgiven her ex for his manipulations but it was clear that Manuel still had strong feelings for her.

When X-Corp L.A. was targeted by the mysterious mutant predator named Elias Bogan, Empath was used as a pawn by Bogan’s pet telepath. In exchange for Kick, an addictive drug that boosted mutant powers, Empath allowed the telepath to infiltrate X-Corp and was forced to use his abilities on Sunspot and Magma, making them kiss eachother passionately as he tearfully watched. [X-Treme X-Men (1st series) #31-35]

When M-Day struck and depowered the majority of mutantkind, Manny was one of around 200 mutants to keep their powers. He relocated to the Xavier Institute where the X-Men and the Office of National Emergency (O.N.E.) had created a safe haven for all remaining mutants. Amara also retained her powers but had witnessed her lover Antonio tragically lose his similarly lava-based mutant powers while the pair were enjoying themselves in La Cumbre, an active volcano in the Galapagos Islands. Suffering from a psychotic break, Amara caused the volcano to detonate and 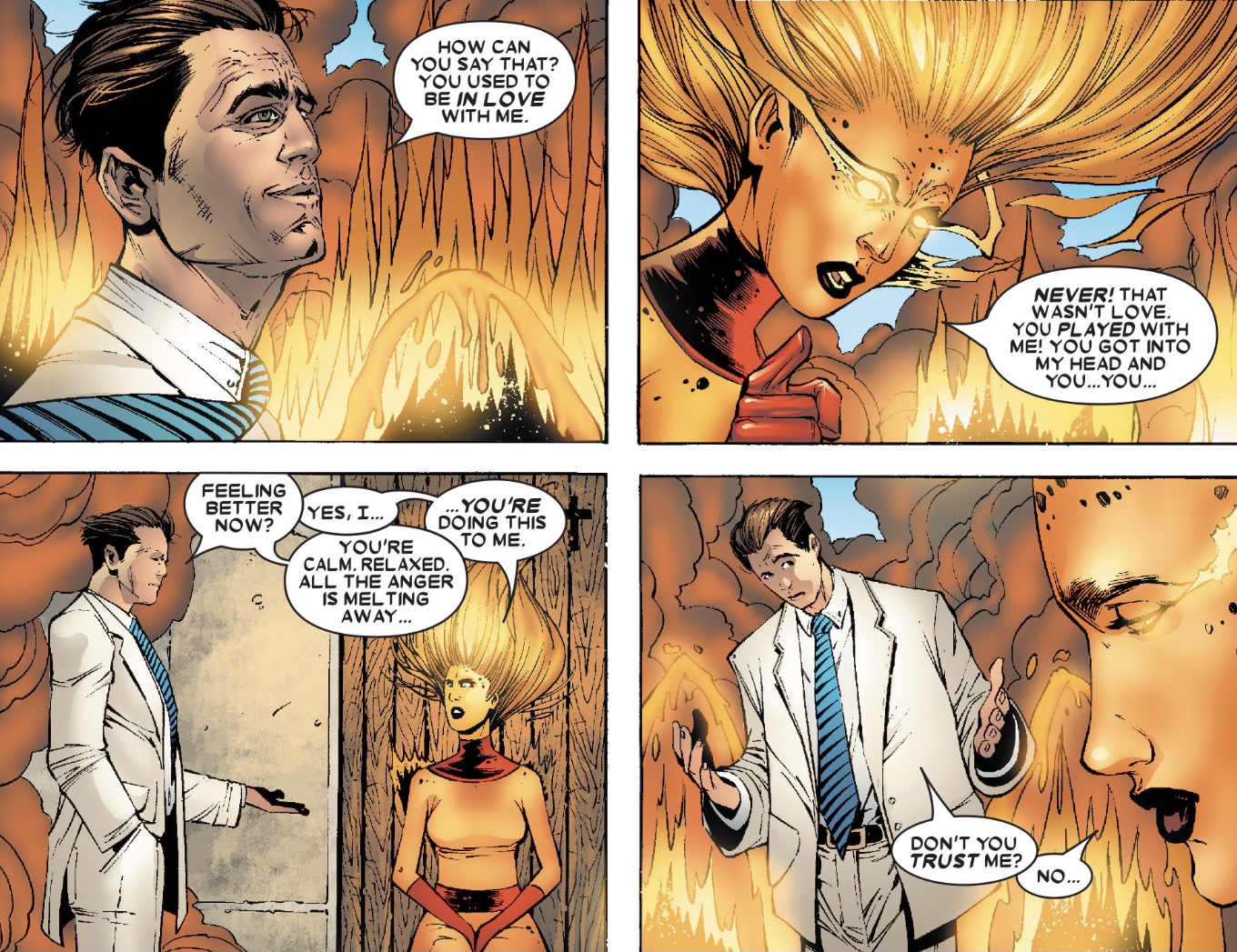 her anger fueled her to lash out, causing destruction as she made her way to Guatemala. Emma Frost, now the headmistress of the Xavier Institute, instructed Manuel to go to Guatemala and bring Magma home safely. Upon his arrival, Empath immediately deescalated the situation, using his powers to calm both the military and Amara.

Back at the institute, both Manuel and Amara stayed on the mansion grounds with the other surviving mutants who were now referred to as “The 198.” Amara understood that Manny needed to use his powers on her in Guatemala but now back in her right mind, she was convinced he was still using them on her. She lashed out at him, warning him to stay away from her; she now believed that any feelings she ever had for him were the result of his manipulations. Unfortunately, Magma was directing her anger at the wrong person, and it was actually a mutant by the name of Johnny Dee who was controlling her actions.

Tensions were high at the institute and when the omega level mutant named Mister M led a breakout, Empath tried in vain to convince Amara to stay. When Johnny Dee manipulated Amara into killing Mister M, she once again blamed Manny and the two were placed under guard. [X-Men: The 198 #1-5]

The X-Men eventually relocated to San Francisco and invited all of mutantkind to join them there. At the same time, Madelyne Pryor, Jean Grey’s clone and Cyclops’ dead wife, returned as a psychic ghost bent on revenge and seeking a new body to house her consciousness. Calling herself the Red 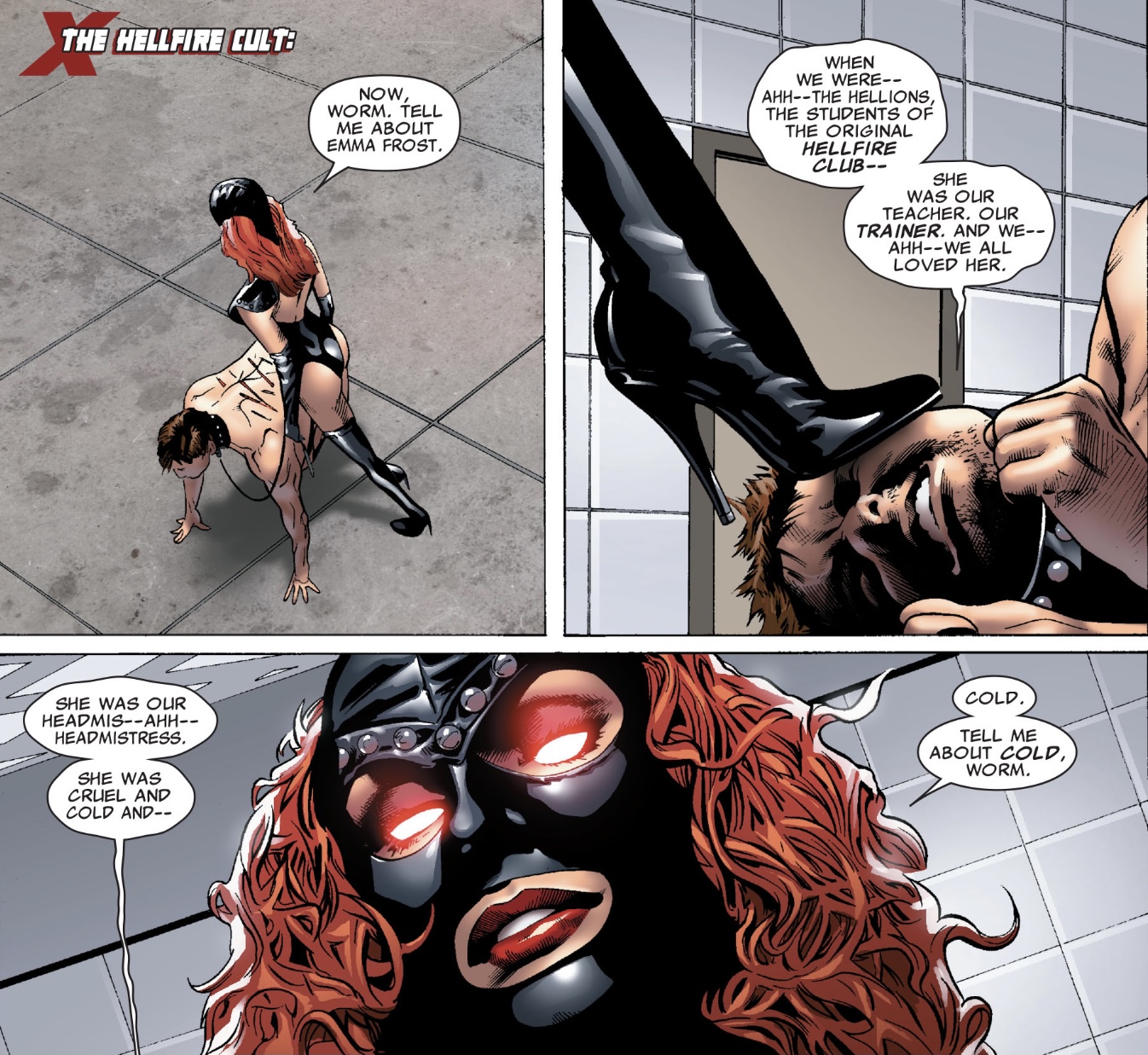 Queen, she recruited Manny to help with her plans. Manny’s loyalty bordered on worship and the two had a sadomasochistic relationship. He helped Madelyne impersonate Emma Frost, now Cyclops’ lover, by telling her everything he knew about his former teacher. Under Madelyne’s instructions, Empath created the Hellfire Cult, a mutant hate group and used his powers to stoke their rage before sending them out to terrorize mutants in the otherwise welcoming city of San Francisco.

Madelyne’s beatings significantly boosted Empath’s powers and when the X-Men attacked the Hellfire Cult’s base, Empath defeated many of them and nearly escaped. He was finally taken down by the young X-Men student Pixie. Pixie was severely beaten by the Hellfire Cult days earlier and used her anger to resist Empath’s attempts at emotional manipulation. She viciously plunged her soul dagger into Empath’s head, blinding him and cutting him off from his powers. [Uncanny X-Men (1st series) #500-503]

Manuel was placed in the X-Men’s brig, which is exactly what Madelyne had wanted. Eventually breaking free of his psychic dampeners, he helped Madelyne and her Sisterhood infiltrate the X-Men’s headquarters. He was again taken down by Pixie, preventing him from assisting Madelyne any further. [Uncanny X-Men (1st series) #508-511]

Madelyne’s plans ultimately failed and Empath remained in the brig, still blind and desperate for revenge. Magma saw how helpless he was and perhaps out of pity, she often visited him, showing him kindness and helping him eat. [New Mutants (3rd series) #1] Manny remained a prisoner of the X-Men quite some time, eventually sharing the space with his former Hellfire Club superiors Sebastian Shaw and Donald Pierce. When Danger, a sentient form of the X-Men’s old Danger Room, became warden of the X-Brig, she tried to rehabilitate its prisoners by using virtual reality simulators to place them in peaceful settings. And so, Empath spent his days dreaming he was with Amara. [X-Necrosha #1]