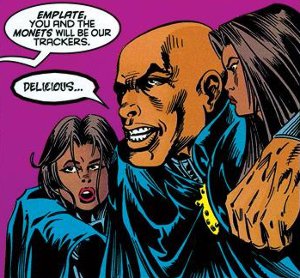 In the Age of Apocalypse, Emplate was a part of Apocalypse’s Elite Mutant Force alongside his sisters, Nicole and Claudette. (For some reason, they were identified as "the Monets" instead of by individual names.)

Mister Sinister tasked them and the Elite Mutant Force with tracking down one of the human escapees from the slave pens, Christopher Summers. Following his trail through Manhattan, they eventually caught up with him but Christopher got the drop on them and shot Emplate point blank in the chest, killing him instantly. 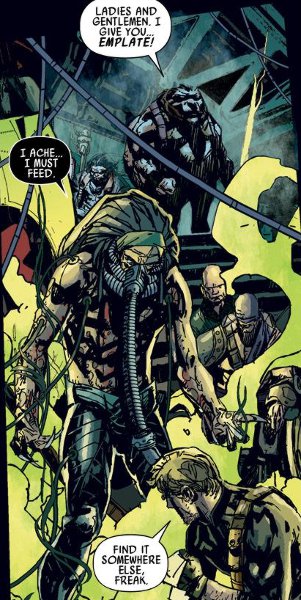 Apocalypse was eventually killed and a new overlord took over when Weapon X was empowered by the Celestials to become Weapon Omega. Using the power of a Death Seed, he decided to recruit some of the most powerful and loyal mutants he could and one of those was Emplate. Whilst Emplate had looked human during Apocalypse’s regime, he looked far more monstrous when he was brought back to life. He quickly proved his worth by spotting a spy in Dark Beast’s lab and apprehending her. Emplate was gravely injured by a team called the X-terminated, who were looking to rid the world of Weapon Omega. They succeeded in their quest and Emplate was forced to flee to Brazil, as all of Omega’s gang were being hunted and killed for their actions.

​Whilst Emplate was not explicitly stated to still be alive, in Bishop’s future hoards of Emplates, creatures created by the man himself, roamed the cities. They proved to be a deadly threat as there was very little anyone could do to cure them of the vampiric infliction. When Bishop travelled to the present day, he tried to kill Emplate to prevent the future carnage but he failed in his mission.

Death of Wolverine: The Logan Legacy #7