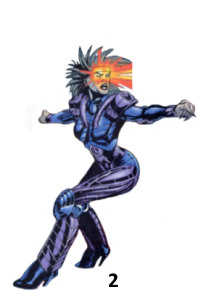 1) When Emplate first appeared, he wore a dark blue full body suit with a ragged long coat over the top. Due to his difficulty breathing on Earth, he was forced to wear a respirator that consisted of a mask and a long tube. [Generation X #1]

2) When he merged with his sisters to form M-Plate, he wore a dark blue and purple metallic body suit that was comprised up a number of panels and plates. It came with large, purple shoulder pads, numerous tubes and large kneepads and gauntlets. [Generation X (1st series) #34]

-) After splitting apart from his sisters again, Emplate wore a modified version of his original costume that contained the panel elements of M-Plates.

3) After merging with Monet a second time and becoming M-Plate again, he wore a black and red bodysuit, which was accompanied with a red headband and long brown trenchcoat. [Generation X (2nd series) #4]

-) after splitting with Monet, he went back to his original costume once more