The eldest son of the Moroccan ambassador Carter St. Croix, Marius lived a life of luxury alongside his sisters, Monet, Nicole and Claudette. Marius never got on particularly well with any of them, though, especially Monet who would taunt him at every available opportunity. Growing up, their father never made any effort to disguise the fact that Monet was the favorite of his 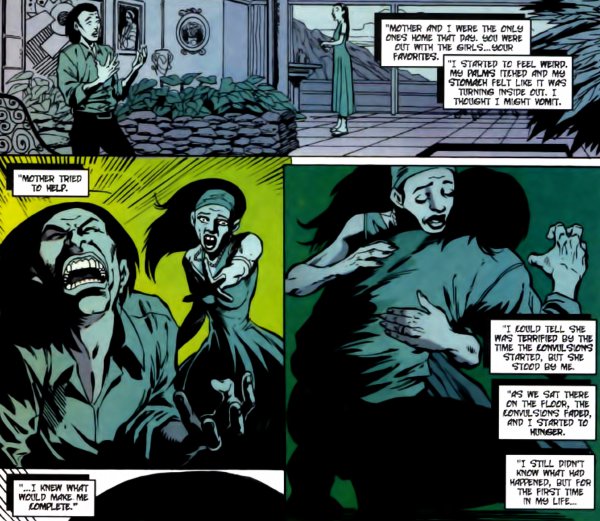 children. When Marius was a teenager, his mutant powers manifested one day when all the family, bar his mother, were out of the house. Doubling over in pain, he didn’t have any clue what was happening to him and his mother rushed over to help. He developed a new mouth on the palm of each hand and was suddenly overcome by an unquenchable hunger. Unable, or unwilling, to stop himself, he killed his mother and fed off the marrow in her bones. When Carter came home, he was disgusted by what he found and so he kicked Marius out. What Marius soon realized was that if he did not feed on bone marrow then he would become unhinged from the Earthly dimension.

Marius travelled far and wide across the dimensions his powers gave him access to, and the long journey affected him in many ways. Returning to Earth a changed man, he discovered Monet had also developed mutant abilities and he decided to enlist her help in gaining more power. Unfortunately, Monet scoffed at his proposal of joining forces and mocked him for giving himself 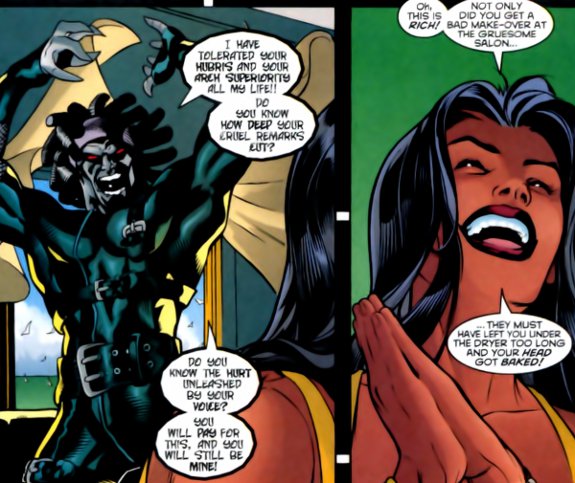 over to the darker forces in the world. Having had enough of her arrogance, he punished her in the worst way he could see fit, by using conjurings he picked up on his travels. He turned her into a mute creature with red, razor sharp skin. The transformation was so extreme that not even his younger twin sisters recognized Monet when they walked in. Outraged by his presence, Nicole yelled at Marius, but the autistic Claudette used her own strange mutant power to open a portal up. It sucked Marius into it but, before it closed, he called to Monet that only he could turn her back. She reluctantly jumped in after him and the twin girls were left to believe their sister was dead. Believing that their father would be devastated that his favorite daughter had died, the twins merged together into a form to mimic Monet. [Generation X (1st series) #40, 58]

Travelling between dimensions wasn’t easy for Emplate, as it took a huge toll on him both mentally and physically. His skin was torn to shreds, with layer and layer of scar tissue building up 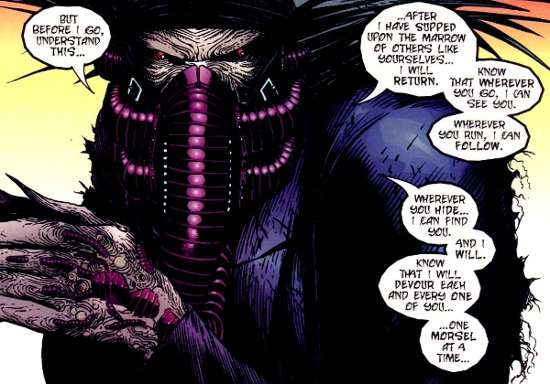 until he was barely recognizable as human anymore. More seriously though was the fact that his lungs were so damaged that he needed a respirator permanently attached to his face to allow him to breathe clearly. Thankfully, his food source was sorted out, as he chained the transfigured Monet up in a dungeon and fed off her bone marrow regularly. Along the way, Emplate acquired a short creature called D.O.A. who acted as his minion. Despite the pain it caused him, Emplate still travelled to Earth to feast on mutant marrow and that’s when he first ran afoul of Generation X, a training squad of young mutants.

Tracking a young man named Jonathon Starsmore to an airport in the U.S., Emplate waited for his prey to appear. Emplate had discovered he could slightly phase out of this dimension, making it so he could watch everything that was happening but not be seen, heard, or touched by anyone else. Emplate struck when he spotted Jonathon and began using his vampiric touch to siphon off energy from the powerful young mutant. He was caught off-guard though by some of Generation X who had come to the airport to fetch Starsmore. Still, he proved to be a powerful opponent and fought off the team, but was surprised when even more of them showed up, including his sister “Monet”, now codenamed M. Deciding to quit while he was ahead, Emplate phased out of dimensional synch again, but not before leaving the team a chilling warning that he was going to eat them no matter where they ran to. Making it back to his other-worldly base, Emplate was drained from the fight but, when he went to feed on Monet, he discovered she was missing from her cell. Unbeknownst to him, the portal-creating mutant Gateway had teleported her to Generation X’s school so she could be with her sisters, who were still disguised as Monet. The real Monet was nicknamed "Penance" by the students, as that was the single word Gateway spoke when he dropped her off. [Generation X (1st series) #1]

Emplate wasn’t going to let his meal ticket just leave him, though. After finding out where she was, he decided to get her back. He reached out to some other villains and created his own team, one powerful enough to take on Generation X. He even met with the human Gayle Edgerton, an ex-girlfriend of Chamber’s whom he had accidentally paralyzed when his powers manifested. [X- 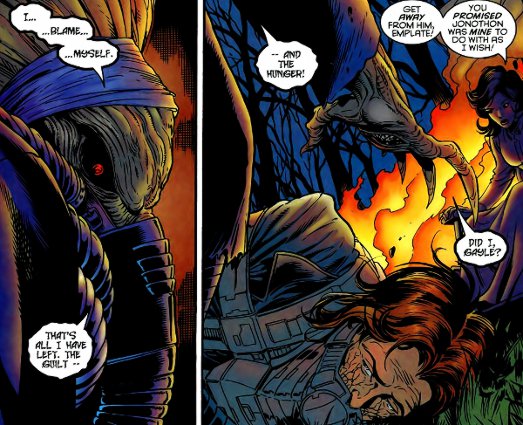 Men Prime] Gayle agreed to help him but, given that she was human, she wasn’t going to be much use in a fight. Emplate displayed another power by converting Gayle into a marrow vampire like himself. With his team complete, Emplate set about capturing the various members of Generation X and tying them up in some woods near their school. He confronted "Monet" and she tried to tell him what happened to their mother wasn’t really his fault. Marius revealed his guilt over her death but still seemed to lack remorse for his current actions.

Emplate was about to feed on Chamber but Gayle angrily stopped him because it wasn’t part of their deal. During the confrontation, M escaped her confinement and so Emplate sent his lackeys after her. He then turned his attention back to the other Generation X members, but he had inadvertently clued in Jubilee to the fact he developed part of a mutant’s power when he feasted on them. Jubilee tried her best to get him to feed on her first and, after being as obnoxious as possible, she succeeded. Emplate was unprepared for how volatile and out of control her power was, and he accidentally created a huge explosion, freeing the students and stunning himself for a few minutes. 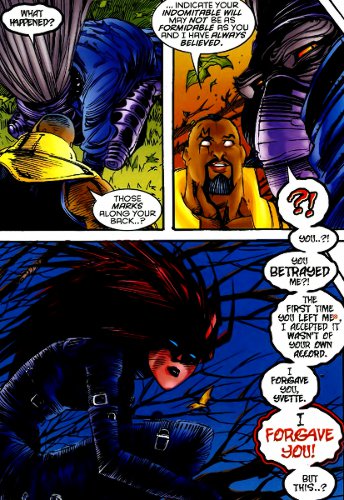 Knowing that the tables had suddenly turned, he grabbed Penance and phased through dimensions again. He quickly jumped back so he could take revenge on M, but he got a shock when he discovered she had called the X-Man Bishop for support. Bishop, whose future timeline was overrun with vampiric creatures created by Emplate, immediately attacked him. Already weakened from the explosion, Emplate was struggling to maintain his presence in this reality and so he tried to feed on Bishop. He was stopped by Penance, who had finally found the courage (and willpower) to stand up to Emplate and stop his gruesome feeding. With very little energy left, Emplate reluctantly left Penance behind and went back to his dimension, but not before giving the team another cryptic warning relating to their teammate, Synch. [X-Men Prime, Generation X (1st series) #10-14]

It turns out Emplate had used his powers on Synch and made the student just like him. Synch struggled to contain the vampiric urges as well as Emplate’s influence, and it was only thanks to Monet that he was saved and the changes were purged from his system. [Generation X (1st series) #14-15]