Baron Wolfgang von Strucker was one of the highest ranking members of the Nazi Party in Germany during World War II. Alongside the likes of Heinrich Zemo, Arnim Zola, and the Red Skull, Strucker was a top advisor to Adolf Hitler, and his Death's Head Commandos were the opposite number of Nick Fury and the Howling Commandos. Foreseeing Hitler's inevitable fall, Strucker began gathering resources during the war to establish a power base of his own, the early stages of the terrorist organization that one day became HYDRA. For many years, however, Strucker lived in secret and isolation, hiding from the international Nazi hunters of America, Symkaria and other countries that were tracking down escaped war criminals. Despite his tense lifestyle, the Baron still found time to father several children: first Werner, and later the twins, Andreas and Andrea.

[Note: Although the twins' mother has never been explicitly named, Andrea is the spitting image of the Baroness Adelicia von Krupp, a close associate of Baron Strucker's seen in Untold Tales of Spider-Man #minus 1. In his guise as the Supreme One, Strucker and the baroness had a run-in with Logan and Richard and Mary Parker at the time Mary discovered she was pregnant with Peter Parker.] 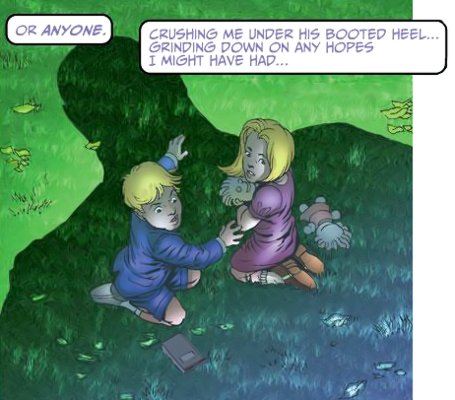 German by breeding, Andrea and Andreas had citizenship from Madripoor (although whether they were actually born in that criminal haven while their father was hiding out, or if the Madripoor civil authorities are just easily bribed to produce such documents is unknown). [Thunderbolts: International Incident #1] Hoping to secure the Aryan supremacy for generations to come, Baron Strucker arranged for the twins to be genetically modified at or before birth, giving them symbiotic mutant abilities that manifested later in life.

Despite their father's high hopes for them, Andrea and Andreas did not live up to his expectations. While they were raised to adapt his racist views and general feelings on Nazi superiority, the twins did not have the same drive that Wolfgang did in enforcing their views on others, preferring mostly to live the life of the idle rich around the globe. The twins had little involvement with HYDRA after their father started the organization, and initially did nothing of note to claim their "birthright" after Baron Strucker died fighting Nick Fury and SHIELD. At some point, Andrea married a man named Jan under unrevealed circumstances, and he died just as mysteriously. The Strucker twins were mostly inseparable, to the point that the depth of their relationship has been questioned by outsiders.

One day, on an illegal safari in Kenya, the Struckers were resting at a supply post with their guides when Andreas became overly affectionate with their hostess. When she rejected his advances, Andreas nonetheless persisted until being confronted by Ororo of the X-Men. On walkabout in her homeland after losing her mutant powers to Forge's Neutralizer, Ororo was still a hero and quickly disarmed the Struckers. She strongly suggested they vacate the post and move on to other lands. [Uncanny X-Men (1st series) #194] Spiteful at being cowed by a woman (much less a black one), the Struckers took their revenge on Ororo as many cowards do: safely, and from a distance. When Andrea spotted Ororo through the scope of her high-powered rifle, she gleefully took the shot. The Struckers continued poaching, collecting the old lion they shot alongside Ororo, but leaving her to bleed out on the veldt. [Uncanny X-Men (1st series) #196]

Mere weeks later, the Struckers made their first public debut in their costumed identities as Fenris. Magneto had presented himself before the world court to be tried for crimes against humanity. Charles Xavier and Gabrielle Haller were present as Magneto's legal defense. 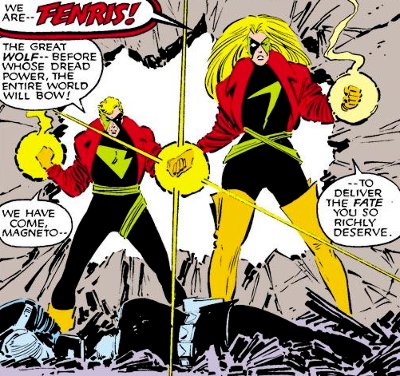 All three had defied Baron Strucker in an incident from decades prior, which was apparently enough to prompt Andreas and Andrea to seek revenge on the trio. To begin, the twins used armored mercenaries from their Fenris organization to attack military and civilian targets around Europe, signing their assaults as "the X-Men" and demanding Magneto's release. Fenris hoped to stir up general anti-mutant dissent and weaken any chances at an acquittal Magneto had.

When the real X-Men got involved in defending their reputation, however, Fenris decided to throw off any pretenses and attack Magneto directly. As their mercenaries distracted the X-Men elsewhere in the city, the Fenris twins blasted their way into the Parisian court. Their boisterous melodrama delayed the killshot long enough for Xavier to recognize the twins' weakness, and he rushed between Fenris to physically separate them. Fenris reunited long enough to blow a hole in the wall, causing the Seine to rush in to the underground chamber where they had confronted their father's enemies, giving them time to escape. [Uncanny X-Men (1st series) #200]

During the Acts of Vengeance campaign, Fenris were recruited by the Jester (on behalf of Doctor Doom) to join the Assembly of Evil and attack the Avengers. The Struckers gleefully tried to murder Captain America in the name of their father, but they were just as successful as the baron in killing the Star-Spangled Avenger. The Assembly were taken into custody after their failed assault. [Cloak and Dagger (3rd series) #8-9] 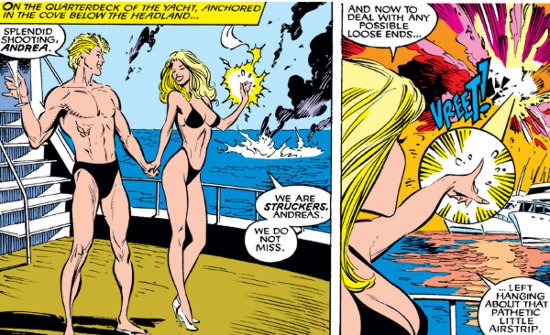 Fenris apparently bribed or forced their way free because, mere days later, they made an assassination attempt on Forge and Banshee near Kyrinos in the Greek Isles. An anonymous tip pointed them to the isolated airstrip being used by the duo, and it was only by pure luck that Banshee and Forge weren't on their chartered plane when Fenris blew it out of the sky. [Uncanny X-Men (1st series) #260] 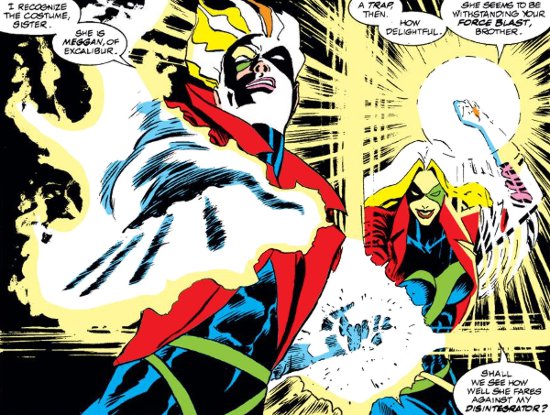 Next, Fenris tried to force the mutant Mesmero into their service, but he hypnotized Excalibur into defending him from their intimidation. Shadowcat was absent when Mesmero snared her teammates, turning the situation into a three-way brawl when she intervened on Fenris's efforts. Ultimately, however, the Struckers were overcome by an even more dangerous foe... the girls' field hockey team of a British prep school! Battered and bruised beyond the telling of it, Fenris and Mesmero were turned over to Scotland Yard. [Excalibur (1st series) #32-34]

The Fenris twins next intended to forge an alliance with Matsu'o Tsurayaba of the Hand, an alliance their father Baron Strucker once attempted decades earlier. Despite the intervention of Black Widow and Wolverine, the villains used body doubles to successfully divert the heroes, and celebrated their new relationship with Matsu'o from a safe distance. [Uncanny X-Men (1st series) #268] With the help of the Hand, Fenris recovered the cryogenically suspended form of Omega Red from a former Soviet storage facility. The Struckers had become tangentally involved in the Upstarts competition, though they had yet to be granted full membership. Through their partnership with Matsu'o, Fenris wanted Omega Red to act as their agent, gaining them further kills to secure their place in the Upstarts and the promised prize of immortality for the winners. Their plan was only hindered by Omega Red's need for the Carbonadium Synthesizer, a necessary element in his conversion to a Super-Soldier which he was deprived of decades ago by enemy agents, which led to his suspended animation. The agent in question, now Wolverine of the X-Men, was captured by Fenris and the Hand so that his shattered memories could be searched for the C-Synth's location. After a daring raid by Fenris on Westchester, the X-Men tracked Wolverine to Berlin and intervened on Fenris' mind probe. The Struckers were forced to flee empty-handed, without Omega Red or the C-Synth in their control. [X-Men (2nd series) #4-7]

When the Kingpin of Crime fell from power, his organization and territory were sought after by the rest of the criminal underworld. The Red Skull, through his agent the Word, sought to avoid a gang war by peacefully negotiating the redistribution of Fisk's empire at a summit in Las Vegas. Fenris secured a place at the table, but little else. Their estranged half-brother Werner von Strucker was present claiming to control the new HYDRA, an imposing terrorist group that destroyed numerous HYDRA splinter cells before consolidating the survivors into a force to be reckoned with. Andrea and Andreas disputed Werner's claim to the HYDRA name, and basically whined that HYDRA should belong to them alone, as a birthright. Their histrionics failed to impress anyone, however. (Indeed, completely unknown to the twins, Baron Strucker was alive and well. Their father was only using Werner as a beard until he was ready to reveal his resurrection to Nick Fury and SHIELD. Wolfgang was even present at the summit, disguised as Werner's bodyguard, and did nothing to explain himself to his pampered children. The Red Skull and his Word were aware of all this, which is why Werner was treated seriously and Fenris was not.) [Daredevil (1st series) #307-309, Nomad (2nd series) #4-6, Punisher War Journal (1st series) #45-47] Their efforts to find power and legitimacy at the Brass Bishop's auction for Target Technologies energy sources were equally in vain. [Alpha Flight (1st series) #121]

Having failed to further their Fenris group through organized crime, Andrea and Andreas returned to the Upstarts competition. 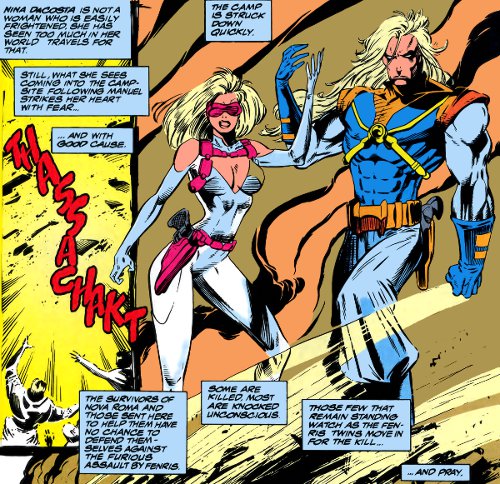 The Gamesmaster, who refereed the tournament, declared open season on former members of the New Mutants and Hellions. While the other Upstarts had excluded Fenris from official membership up till that point, Gamesmaster allowed them full participation in the "Young Hunt" as incentive to the others. Indeed, Fenris struck first when they captured Magma on the outskirts of Nova Roma. They failed to acquire the other target in the area, however, as Empath was saved by the psi-scrambling arrows of Moonstar. Their next strike was equally ineffective, and Fenris was taken into custody by X-Factor when they made a play for Wolfsbane. All their efforts ended up being for naught, as the Upstarts were dismantled in their absence and the purported prize was no longer available. [X-Force (1st series) #32-33, New Warriors (1st series) #45-46]