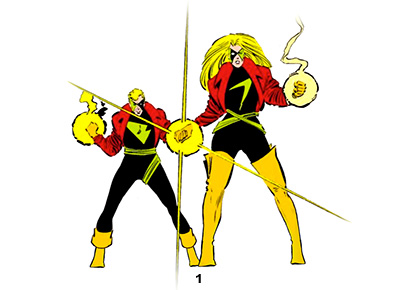 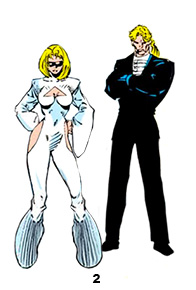 1) In their first appearance as Fenris, the von Strucker Twins wore matching outfits, with coordinating details. Each outfit consisted of a black, full-bodysuit that left their hands exposed so they could make skin-to-skin contact. They had complimentary lime green emblems across their chest, as though if fit together it would make one shape. They accessorized with collared, short red jackets, matching lime sashes tied as belts (Andreas in a triangular pattern around his waist and thighs, and Andrea in an X pattern over her waist & hips), and opposing lime & black masks.. The main difference between their outfits was that Andrea wore thigh-high gold boots, while Andreas had calf-high gold buccaneer boots. [Uncanny X-Men (1st series) #200]

2)  When they appeared with Matsu'o Tsurayaba, the Fenris dropped their super-villain costumes and adopted separate looks. Andreas wore a simple black suit with a white shirt front with straps that buttoned down the right side of his neck. Andrea had a white, skin-tight, full-bodysuit with over-sized sleeves and excess fabric over her boots. This particular outfit had a triangular cut out that exposed her cleavage and oval cut outs hips as well. She also wore pink wrap around glasses. [X-Men (2nd series) #5] 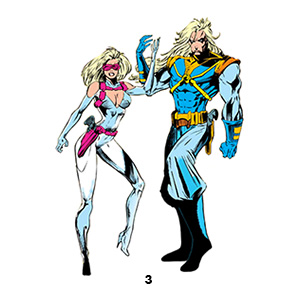 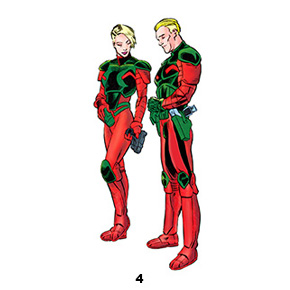 3) As members of the Upstarts, Fenris upgraded their costumes to a combat-ready look. Andrea once again went for a white skin-tight full bodysuit with attached gloves and boots. Like her previous costume, this had a triangular cut out over her her cleavage, but now oval cut outs over her shoulders. She wore it with a hot-pink holster for her pistol, a utility harness and matching pink sunglasses. Andreas wore a blue and gold outfit that featured calf-high, deep blue boots, with a light-blue, loose, flowy fabric that spilled over their tops. He wore a deep-blue chest-plate with a yellow harness, gold armor on his shoulders, and a golden holster. Rounding out out this look were deep-blue combat gloves with gold accents. [X-Force (1st series) #32]

4) The von Strucker twins later adopted another matching ensemble. In addition to their new, closely cropped haircuts, they wore red and green body armor with green holsters, knee pads and utility belts. Each of them had slashing red patterns over their breastplates and Andreas had deep-green stripes on the inside & outside of his thighs. [Generation X Annual '96]

5) When Andreas joined the Thunderbolts as Swordsman after Andrea's death, he wore a purple armored outfit evocative of the original Swordsman's, and used Andrea's flesh for the hilt on his sword. This gray bodysuit featured purple armor over his shoulders, chest and back, purple straps around both biceps, purple gloves, thigh high boots and a winged purple mask that fully protected and concealed his face. [New Thunderbolts #2]