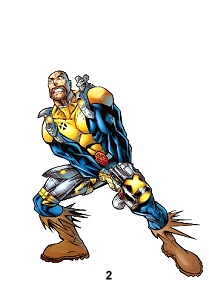 1) During his career as an active super-hero, Forge generally wore a version of the new X-Men standard blue and gold uniforms developed by Moira MacTaggert, usually with some weaponry and gun belts added. Unlike most others, he wore buckskin boots with it, as a nod to his heritage, and he’d often wear a version of the uniform that revealed part of his bionic right leg. [Uncanny X-Men (1st series) #258]

2) When he took on a more active role with X-Factor again, after serving as their governmental liasion for some time, Forge wore a customized version of the uniform, displaying shorter gloves and an inverted, small X-symbol on the left side of his chest. [X-Factor (1st series) #105]

3) When working for Xavier's Mutant Underground, Forge occasionally wore Xavier’s colors: a black overall with yellow knee- and shoulder-pads and red X-symbols on the arms and as a belt symbol. [Mystique #3]

4) While part of Cable’s outlaw X-Force, Forge adopted the team colors of black with orange highlights for his boots and gloves. His bionic leg was on display, and he often had pouches and mechanical components strapped to his suit for easy access in the field. [Cable and X-Force #1]

5) During the X-Haven era, Forge mostly worked in a support role at the base instead of as a field operative. As a result, he tended to wear casual clothes instead of a combat-ready uniform. He was often seen in an Xavier’s school jacket and workman’s pants. [Extraordinary X-Men #2]

-) In Krakoa, Forge has returned to his classic X-Men uniform. [X-Force (6th series) #4] He adopted a slightly modified uniform for one mission with Sunspot's roster of X-Men. [Secret X-Men #1]