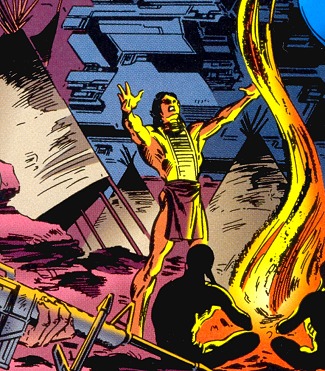 Very little is known about the past of the mutant called Forge – it is even unclear whether Forge is his actual name. He was presumably born in the American northwest to a tribe of the Northern Cheyenne. Early on in his development, he demonstrated a gift for magic rarely – if ever - seen before. As a result, he was raised by the shaman Nazé as a shaman himself, and developed considerable magical aptitude. He was consecrated to fight the tribe’s foe, the chaotic trickster known by many names, whom the Cheyenne simply called the “Adversary.” At some time during his teens, he discovered that, besides his magical heritage, he was also a mutant, as his mutant power to invent whatever machinery he could think of manifested. 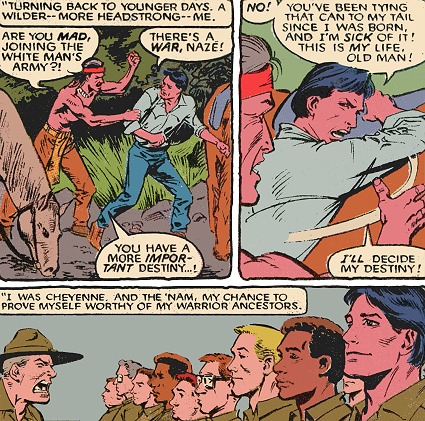 When he was eighteen years old, Forge rebelled against Nazé’s teachings and his mapped-out future and decided to join the U.S. Army overseas' action against Nazé’s wishes. He quickly proved himself to be a crackshot. His first mission in the war put pain to his dreams of glory. Forced to kill an enemy soldier his own age, he realized war wasn’t a game. Forge quickly made sergeant and, after his first tour of duty, was offered a job in the newly created agency S.H.I.E.L.D. but declined, feeling he had an obligation to his men to bring them home safely.

That was not to be: when his troop defended a valley against enemy forces, all his men fell. Enraged, Forge used his powers as a shaman to avenge his friends. Casting a forbidden spell, he harnessed the spirits of his slain men to open a dimensional gate and call forth demons to slay the opposite side's troops. At that point, Forge didn’t know or care that this act would also enable the Adversary to 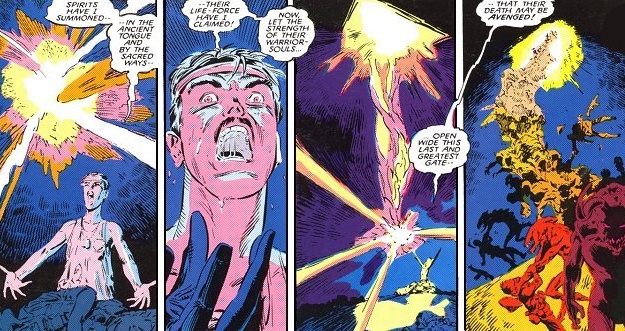 gain a foothold in this dimension. As he saw the demons slay his foes, he came to his senses and tried to stop the slaughter by calling in an airstrike. The B-52’s bombed the valley and killed the demons. In the process, Forge was grievously injured, losing his right leg above the knee, his right hand and gaining scars all over his right side. [Uncanny X-Men (1st series) #227, 262-263]

[Note: History of the Marvel Universe #2 established a major, generational war in Marvel's history known as the Sin-Cong conflict. A revolution in the fictional country of Sin-Cong, this war drew international response and served as a continuity patch for characters with personal history of service in the Korean or Vietnam Wars but have realistically aged out due to "Marvel-Time". Forge's involvement in the Vietnam War has therefore presumably been retconed to involved Sin-Cong instead.]

Afterwards, Forge sank into a state of depression, from which even the psychiatrists couldn’t help him, but eventually he snapped out of it. Little is known of the time afterwards. Forge used his powers of invention to create himself advanced state-of-the-art prosthesis for his missing limbs and, apparently, put his energies into becoming a superb inventor, also making contacts with Nick Fury and several other government officials, while at the same time leading the life of a recluse. He also vowed never to use magic again after the events in Southeast Asia, much to the displeasure of Nazé, who urged him to return to his duties as a shaman.

When Tony Stark stopped creating weaponry for the U.S. government, Forge became their top weapons manufacturer. At that time, the government had become aware of the clandestine threat 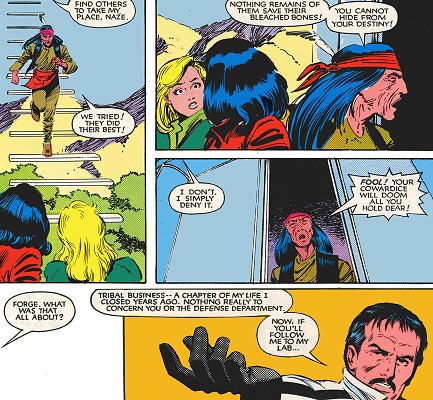 of the Dire Wraiths – evil shapeshifting aliens who were trying to subjugate Earth – only the Galadorian spaceknight, Rom, with his Neutralizer and Analyzer, stood in their way. Rom’s weapons couldn’t be copied, therefore Forge was to create new versions of his weapons from scratch. He succeeded by creating a Neutralizer that was capable of nullifying every superpower. At that time, signs already pointed towards the Adversary gaining a foothold in this dimension, but Forge refused to get involved, despite Nazé’s heated arguments, claiming that he held nothing dear and didn’t care what happened. [Uncanny X-Men (1st series) #184]

The X-Man, Rogue, was being framed for murder and Henry Gyrich and Valerie Cooper decided to make an example of her with the prototype of Forge’s Neutralizer on presidential order (thus showing they were no longer dependant on superhero teams like the Avengers). Forge was furious when he learned of this, thanks to Raven Darkholme (secretly Rogue’s foster mother, Mystique, and his government contact) as one of his conditions had been that his weapons wouldn’t be used until he released them. Forge followed Cooper, Gyrich and their S.H.I.E.L.D. team to the banks of the Mississippi and, as he physically tried to restrain Gyrich from shooting Rogue, Storm, who shoved Rogue out of the way, was hit instead. [Uncanny X-Men (1st series) #185]

Feeling guilty over what had happened to Storm, Forge prevented her arrest and took her with him to his home, where he nursed the suicidally depressed woman back to health. It helped that he could sympathize  with her loss, as he knew what it was like to be maimed. Eventually, both 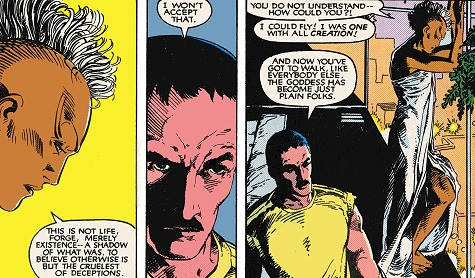 mutants began to fall for each other but, when Ororo accidentally learned that Forge had created the Neutralizer (something he had kept from her), she left him angrily, despite his offer to find a way to restore her powers. [Uncanny X-Men (1st series) #186]

She briefly returned to help save his life from the alien Dire Wraiths, who considered Forge a palpable threat to their plans, and was joined by Nazé and several X-Men and X-Men allies. At the end of the fight, Storm warned Forge not to follow her –  that they would eventually meet again 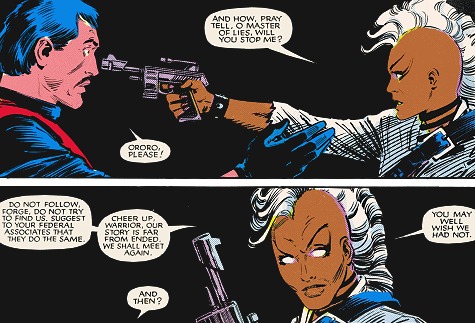 and then he may well wish they had not, leaving him devastated. Unknown to them, Nazé was killed and replaced by a Dire Wraith who then, in turn, as the battle began to turn in the heroes’ favor, used Nazé’s magical knowledge to call the Adversary, asking for help and offering him Earth. The Adversary announced that Earth was already his for the taking and took possession of the Wraith/Nazé’s body. [Uncanny X-Men (1st series) #187-188]

Shortly afterwards, humanity’s war against the Wraiths grew more desperate. In a last gamble, the aliens had used a spell that started to transport their world and their sun– the source of their power - here. Wraithworld was to eventually merge with and replace Earth. Forge, however, as a consequence of the prior events, refused to share his improved Neutralizer with the government after what he considered Gyrich’s betrayal. Eventually, Rom himself came to appeal to him. Forge explained his concerns to the spaceknight – that people like Gyrich would eventually use the Neutralizers to rid the world of all superhumans. However, when he saw Wraiths openly attacking humans in the streets of Dallas, he agreed that he had to help somehow. 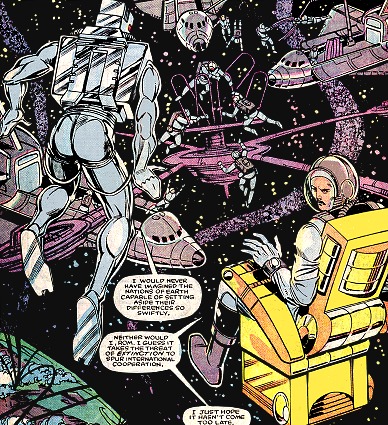 The two hatched an elaborate plan: Forge, with the help of Earth’s governments, was to construct a giant Neoneutralizer in orbit that needed Rom’s Neutralizer to be powered. That way, they wouldn’t be giving up control. Despite several attacks by the Wraiths on both Forge and Rom and despite Agent Gyrich’s manipulations, the Neoneutralizer was finished – shortly after Wraithworld was transported to our solar system, opposite Earth and causing worldwide disasters. After Rom managed to escape one last Wraith trap, the Neoneutralizer was trained on Wraithworld (first depowering, then banishing it) and not on Earth as Gyrich had expected, thereby robbing the Wraiths of their power-source without threatening Earth’s superhuman population. [Rom #61-66]