It is unknown what precisely Forge did for the next months, though apparently, after his confrontations with Storm and Rom, he must have come to the conclusion that he did care after all and had to put right the mess with the Adversary he had started during Vietnam – meaning he returned to the ways of a shaman to undo the damage. When, weeks later, Storm came looking for him to appeal for his help in regaining her powers, she found his penthouse empty and in ruins, with his holographic displays hinting at his having become severely unhinged. Nazé/the Adversary appeared and slowly convinced her that Forge had indeed gone mad and was trying to 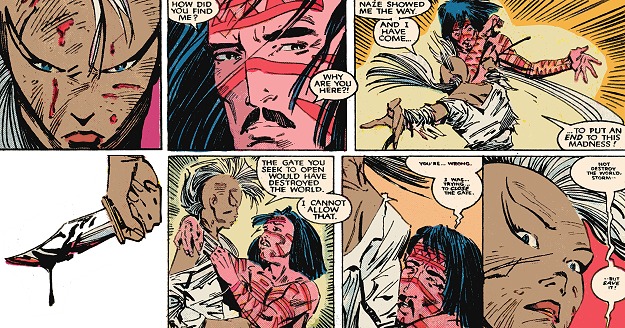 destroy Earth in the Adversary’s name. As Ororo started to admit to herself that she loved Forge, she also became more and more convinced that he had in fact gone evil, as Nazé claimed. Eventually, after a long and dangerous trek, she confronted Forge on a mountain, surrounded by demons, over him a gate to another dimension. Convinced that he was trying to destroy the world, she stabbed him, only then realizing that she had been set up: Forge had, in fact, been trying to close the hole and save Earth from the already existing dimensional portal. [Uncanny X-Men (1st series) #220-224]

While the Adversary then destroyed Forge’s mountain of power and widened his control to the city of Dallas, Forge’s home, where time and space suddenly went crazy, Storm and the severely injured Forge found themselves transported to another Earth, devoid of any human life. They spent a year there (while hardly any time passed on the other Earth) – most of it separate, as Storm journeyed to Africa to do a lot of soul-searching – and realized that the Adversary, even as he was preparing to destroy the other Earth, was giving them the chance to become parents to a new humanity on this world. Admitting their love for each other, they nevertheless decided that they had to try and save the “real” Earth.

Forge had used their time apart to find a new mountain of power and use the technology in his artificial leg to create an anti-Neutralizer, which gave Storm back control over her powers – and, using her elemental powers to complement his magic, they created a way back to their home dimension, where, unfortunately, they quickly became prisoners of the Adversary.

The X-Men finally found out that there was a way to defeat the Adversary: a spell to counter the one Forge cast many years ago, which had freed the Adversary in the first place – but it needed nine souls to give it energy. The eight X-Men and their companion, Madelyne Pryor, sacrificed themselves to Forge’s spell on live TV to banish the Adversary.

Later, the goddess Roma secretly returned the X-Men to life. The X-Men decided to let everybody believe they were dead, in order to better strike back at their enemies and found a new base in Australia. Forge, however, wasn’t aware of this and walked away; Mystique’s accusation of “murderer” ringing in the air. [Uncanny X-Men (1st series) #225-227] Both Forge and Freedom Force stuck around in Dallas for some time after that.

Illyana Rasputin, Colossus’ sister, became consumed by the grief for her brother and her friends and eventually teleported to Dallas to kill Forge, followed by her fellow New Mutants, who were trying to talk sense into her. She found Forge accompanied by Freedom Force and it took her 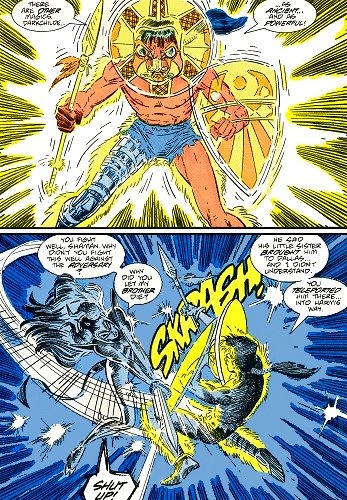 some time to realize that this was Mystique in disguise. Destiny had warned them of Illyana’s coming and feared Illyana’s deeds here would eventually lead to her becoming Earth’s destroyer (a hint of the Inferno to come). The real Forge eventually confronted her and, unable to beat his sorcery on Earth, she teleported both of them to her magical domain Limbo, where she was sorceress supreme. There, they used magic to fight each other. As Forge realized the reason for her anger, he lowered his defenses, urging her to strike him and send him to join the woman he loved in death. Illyana struck him once with her Soulsword but, at the last moment, she found she couldn’t murder him, realizing that this act would totally condemn her. She asked how he knew that she wouldn’t kill him. He didn’t, but he figured that she had friends who thought she was worth it. Illyana sent him back to Earth, telling him he didn’t deserve to be with the (dead) Storm and other X-Men. [New Mutants (1st series) #65-66]

Forge basically exiled himself for the following months, living the life of a hermit at the continental divide, trying to somehow find a balance between his shaman and his mutant side. During a dream quest, he found himself in an old-fashioned wild west saloon. Inside, he saw Storm in a cage and an Arabic gentleman (Amahl Farouk, aka the Shadow King) asking him if he wanted to save “his pet,” as the gentleman beside him had already tried and failed to do (that man was FBI

agent Jacob Reizs – the man Farouk had taken over). They played a game of arm-wrestling and Forge seemingly won but found that their arms merged as Farouk mocked that, there, the house always won. As Farouk threatened to consume his mind and soul, Forge struck him with his bionic hand, breaking contact in the process. Back in reality, he realized how lucky he had been to escape, but he also realized that somehow Storm was alive – and in deadly danger. [Uncanny X-Men (1st series) #253]

Forge contacted Val Cooper and her Freedom Force. They were, in turn, contacted by Moira MacTaggert’s research station on Muir Isle, which was under attack by a group of mutant-hating cyborgs called the Reavers. Val Cooper ordered Freedom Force into battle against the Reavers. Still furious at Forge for the supposed 'death' of Rogue, Mystique was reluctant to help, but was eventually forced to acquiesce. Destiny cryptically told her to be kinder to Forge, "considering how intimately your futures are intertwined." Freedom Force and Forge arrived just as the Reavers had soundly defeated every X-person on Muir Island. One of the Reavers, Lady Deathstrike, attacked the plane, killing the pilots.

Mystique angrily ordered Forge around after everyone was safe, telling him to look after Destiny, away from the fight. As the battle raged, Destiny urged Forge to go to the fight, insisting he save Mystique, and that he should love her. He disputed this, stating that his heart was spoken for but 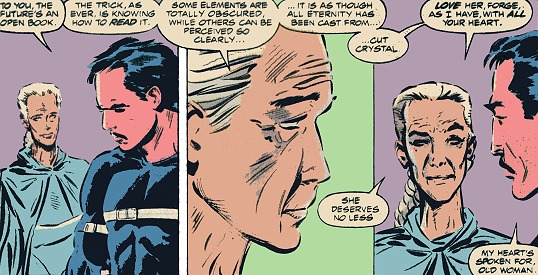 she  reminded him of her ability to see the future and that it was "the nature of storms to pass." Shortly after he left, Legion appeared, his evil Jack Wayne personality dominant, and killed Destiny.

Meanwhile, things quickly went downhill for Freedom Force until Forge unexpectedly arrived and killed the Reaver about to shoot Mystique and Pyro, putting the enemy on the run. Nevertheless, Mystique blamed Forge for Destiny’s death and swore she’d get even with him for the two lives he now owed her. Later, with Freedom Force gone, Banshee asked the desolate Forge if he was interested in helping him find the X-Men and if he could develop a better defense system for Muir Isle. [Uncanny X-Men (1st series) #254-255] Forge complied. As Banshee noted that the behavior of several Muir island residents had changed for the worse, he asked Forge to sneak in a back door that would allow them to return undetected if need be. [Uncanny X-Men (1st series) #257]

Before Forge and Banshee embarked on their search for the missing X-Men, Forge was asked for help by Alpha Flight, who were referred to him by Val Cooper: The Roxxon Oil corporate building in Denver had been overtaken by one of their experiments, a being that could control all manners of technology and could access computer-systems worldwide. Alphan and techno-morph, Madison Jeffries, had tried to get in, but found his foe was too fast for him – they needed someone who could reconfigure technology with the speed of thought. With the help of Forge configuring Jeffries’ Box armor, they went in. Both men found they had something in common, as they were both veterans traumatized by the Vietnam War. Within the techno-horror, they found and saved James MacDonald Hudson, the original Guardian, a prisoner of Roxxon, who had been believed dead. [Alpha Flight (1st series) #87-90]

Back on Muir Island, with the help of Cerebro, they learned that Storm was in Cairo, unaware that the Shadow King used their Cerebro search to gain access to Muir Isle. When the private jet Banshee and Forge intended to charter was shot down, they pretended to be dead themselves 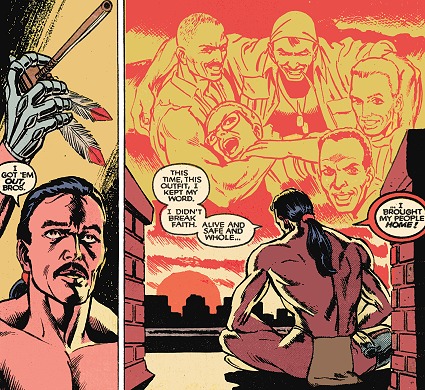 and went to what was left of Xavier’s School. There, they witnessed how Jean Grey was kidnapped by strangely deformed Morlocks. They saved her, but Jean and Banshee were kidnapped once again. Following them into the Morlock tunnels, Forge reminisced about his time in the war. Finally, he found Jean and Banshee, who had both been horribly transformed by the Morlock, Masque – same as the surviving Morlocks. The three of them worked together to save Masque’s other victims, an amnesiac Colossus and former Morlock leader, Callisto. Forge’s leadership brought them out again, which helped him deal with his past losses. [Uncanny X-Men (1st series) #262-265]