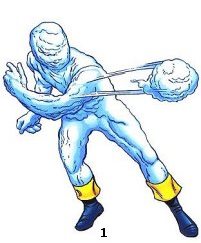 1) Upon joining the X-Men, Bobby was given a training uniform by Xavier. However, it wasn’t the standard costume but a modified one that suited his special abilities. By covering himself in snow, Iceman did not have to fear being recognized, so he had no need for a mask. Actually, his outfit was nothing more than yellow shorts and a pair of boots, though like the pants, they were sometimes iced over too. [X-Men (1st series) #1, 5] 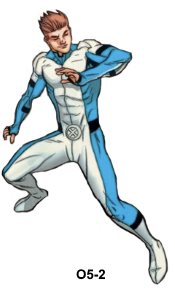 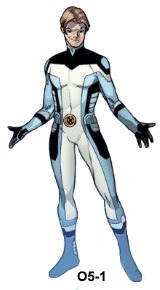 O5-1) Young Iceman and the original five X-Men received new team uniforms while operating in the present. Bobby shared the same similar design of lightly armored material as his teammates, with his suit made of white and light shades of blue to represent ice. He still covered himself with snow and ice from head to toe when powered up. [All-New X-Men (1st series) #18]

O5-2) Iceman's next costume was very similar, a mostly white uniform with light blue around his collar and down the outside of his arms and legs. He very rarely appeared in this costume outside of being iced up. [All-New X-Men (2nd series) #4]

O5-3) For his next look, Iceman once again wore shades of blue and white. The suit had a white chest piece with a blue 'X' crossing his collarbone, darker blue leggings, and black detailing down his outer sides. Iceman also learned how to freeze only his body, leaving this costume visible even when he was in his ice form. [X-Men: Blue #1] 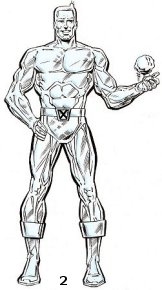 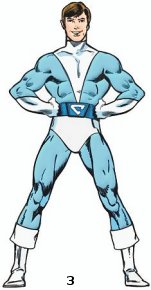 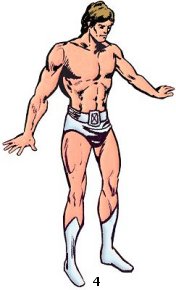 2) After the team had proved themselves in battle time and again, Xavier rewarded them with individual costumes. This set was designed by Jean Grey, who had secretly been told of Xavier's plan. There was even a new “costume“ for Bobby, as his shorts and boots were now colored blue. But, underneath his icy exterior, it didn’t really matter. [X-Men (1st series) #39]

3) While with the Champions, Bobby came up with his first real costume. Determined to prove himself as a hero, he wanted to start by looking the part and came up with this light blue and white combination. It featured white trunks, gloves and buccaneer style boots. The bodysuit was light blue with a broad white band that descended in a V shape to Bobby's waist. With this, Iceman wore a darker blue belt with a white C to denote his membership in the Champions. [Champions (1st series) #14]

4) Long months later, Iceman joined his former teammates, Angel and Beast, in the Defenders. Bobby returned to his former look of plain trunks and matching boots, though now the shorts and boots were colored a very light blue that was almost white. He also sometimes wore a pair of gloves in the same color. [Defenders (1st series) #125] 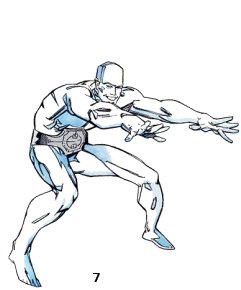 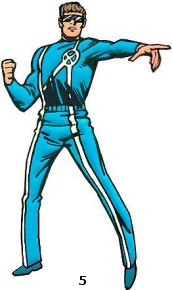 5/6) Many months later, the original five X-Men reunited to form X-Factor. To the media and public, they acted as a mutant hunting group, while secretly they were trying to rescue mutants and help them to handle their powers. While posing as a mutant hunter, Bobby wore a turquoise blue jumpsuit with white striping and an X symbol on his chest. All team members wore dark shades so that Cyclops' special ruby quartz glasses wouldn’t stick out. In situations that required the use of their powers, the team used the cover identities of the X-Terminators along with a new set of costumes. Iceman's was light blue with a large white X that descended from the shoulders down his chest to his legs. White gloves and boots completed this outfit. [X-Factor (1st series) #1-2]

7) After Loki tampered with Iceman’s abilities, increasing them to a level that he could no longer properly control, he had to rely on an inhibitor belt to keep his powers in check. Ironically, the device was built by a mutant-hating group who intended to negate Bobby’s powers but was unaware of Iceman’s recent power boost. [X-Factor (1st series) #23]

8) Shortly after the X-Tinction Agenda, X-Factor settled for a new team look. Cyclops, Jean and Iceman all wore identical uniforms. Only Archangel and the furred Beast stuck to their looks. These blue bodysuits featured a prominent yellow X across the chest that connected to yellow boots and gloves. There was also some additional yellow piping around the neckline. [X-Factor (1st series) #63]

9) Only a few weeks later, X-Factor rejoined the X-Men and again, new costumes were in order. This was possibly the costume that Iceman has worn for the longest period of time, though it rarely seen as he was more often shown in ice-form or civilian clothes. The costume was originally dark blue and white, but later was presented in two different shades of blue most of the time. A red and black circular X symbol adorned his chest on the left and he often wore a belt of some sort. [Uncanny X-Men (1st series) #284]

--) During this period, Iceman began to see the vast potential of his cryogenic powers and began to use them in new and more creative ways. One trick he used on several occasions was increasing his size and mass and thus his strength, by packing more ice onto his form. This more intimidating form was often rougher and spikier than his classic look. Though not a costume per se, this new form is noteworthy as it represented a major change in appearance for Iceman's frozen form - the first of many to come. [Uncanny X-Men (1st series) #300]

--) When the High Evolutionary canceled all mutant powers on a global scale, Iceman temporarily returned to the X-Men. He was wearing a basic blue outfit with a yellow X across the chest area. [Uncanny X-Men (1st series) #380]

10) By the time Iceman fully returned to active duty, the X-Men no longer wore bright costumes, but personalized leather outfits that almost looked like street clothes. The members had a vast supply of different shirts, coats and jackets to choose from. Bobby mostly stuck to leather pants, Hawaiian shirts and a longer coat with the requisite X symbols. Around that time, Bobby also gained greater control over his ice-form and was now able to transform his hair and his clothing as well, giving him a more human appearance while iced up. [Uncanny X-Men (1st series) #395] 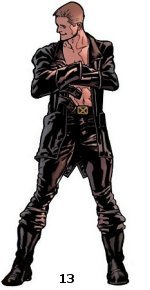 11) After a while, some of the X-Men returned to more individual looks. Bobby still wore the basic leather clothing with X logos but he began opting for a purple trench with gold details and large plated X symbols on the shoulders. Under this, he wore a simply blue-grey shirt and matching pants, with a standard X belt and boots with an X-Men motif. [Uncanny X-Men (1st series) #415]

--) After turning permanently into animated ice, Iceman’s body was a walking, partially transparent ice statue. His head was a smooth iced dome like it had been in his early career. His “costume” was an equally-transparent set of boots and trunks with an ‘X’ buckle, quite similar to his classic ice form. It was unclear whether he was actually wearing any clothes or if this attire was simply an aesthetic manifestation of his powers. [X-Men (2nd series) #157]

12) Once his abilities were turned off then back on again after M-Day, Bobby needed time to regain control of his powers. At this point, he was constantly radiating bitter levels of frost, resulting in a spiky "hair" and random spikes of ice on his body. For a costume, he switched between a black speedo and board shorts with a black ‘X’ buckle. He also frequently wore a blue-black jacket with a high collar. It had two thick horizontal red stripes on the sleeves and red rectangles that rose up from his chest and around his neck like a second collar. The jacket also had a small ‘X’ on the left shoulder. [X-Men (2nd series) #188] 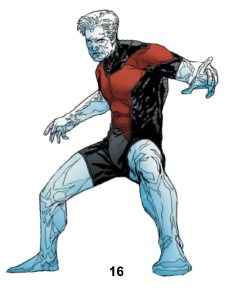 14) Upon coming to San Francisco, Bobby adopted another simplified costume made of a set of blue-black slacks with matching boots and a short-sleeved tight T-shirt. The shirt had red X symbols on each shoulder, as well as a thin yellow stripe circling his chest running perpendicular to a second stripe from his waist up over his left shoulder. This stripe had a red, black and yellow X medallion affixed over his left breast. [X-Men: Manifest Destiny #5]

15) Around the Jean Grey School, Iceman kept his ice-form crag and rock-like formations. He either appeared in a nude ice-form appearance, or with a token set of cargo shorts or black spandex pants with an 'X' buckle as a "uniform." [X-Men Legacy (1st series) #260.1]

16) In X-Haven, Iceman adopted a new costume that resembled a wetsuit with short sleeves and legs. It was primarily black with a red design evocative of an 'X' on his chest, extending onto his sleeves. He had a red and black 'X' symbol on his collar as well. [Extraordinary X-Men #1]