His powers openly manifested for the first time while he was on a date with a girl named Judy Harmon. On the way back from the movies, they were attacked by the town bully, Rocky Beasely, and his gang. While the others held Bobby back, Rocky tried to force himself on Judy. To stop him, Bobby encased Rocky in a block of ice, revealing his mutant powers in front of others. Judy was just as frightened as Rocky’s gang by the display of Drake’s powers, and ran away.

Word spread of the incident and the townspeople broke into the Drake home and began to beat on Bobby. When the local sheriff arrived, he stopped the mob and placed Bobby in a jail cell for his own protection. Word spread to Westchester, alerting Professor

Charles Xavier and his first student, Scott Summers, aka Cyclops.  That night, Cyclops blew a hole through the wall of the jail and offered Bobby a place in the newly-formed X-Men team. Bobby declined the brusque offer and the two began to fight until the mob arrived and attacked the young mutants again. The two young men were nearly lynched before Professor Xavier stepped in, psionically freezing the mob in place. Back at the Drake residence, Xavier explained he could remove the townspeople’s memory of Bobby’s powers and the events of the last few hours. Bobby’s parents agreed to enroll him in Xavier’s School but, in order to protect the X-Men’s secrets, Xavier wiped the Drakes’ memories of Bobby’s powers as well. [backstory in X-Men (1st series) #44-46] 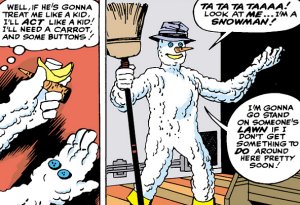 Within two months, Warren Worthington III (Angel), Hank McCoy (Beast) and Jean Grey (Marvel Girl) joined the team and formed the original X-Men. The youngest of the team, Bobby quickly became the "class clown" of the group. He became known as Iceman and practiced regularly with the team to hone his powers in the Danger Room, in case evil mutants threatened humanity. As Iceman, Bobby participated in the team’s first battle with Magneto at Cape Citadel. [X-Men (1st series) #1]

Among the X-Men, Iceman was the first to reach out and make contact with other super-heroes, albeit accidentally. Looking for some afternoon fun, Bobby decided to take a cruise for teenagers around Manhattan. He tried to strike up a conversation with Dorrie Evans, unaware that her boyfriend was none other than Johnny Storm, the Human Torch. Bobby struck out with Doris, but the cruise had other surprises in store, as the boat was soon boarded by pirates under the command of Cap’n Barracuda. Iceman and the Human Torch both leaped into action against the crooks, but inadvertently cancelled out each other’s attacks. The boys got their act together quickly, though, and together put an end to Barracuda’s piracy. [Strange Tales (1st series) #120]

During their time off from the X-Men, Bobby and Hank McCoy often spent time at Greenwich Village’s Café A-Go-Go listening to Bernard the Poet. It wasn’t Bernard’s swinging prose that kept Bobby coming back but rather a waitress named Zelda. Still, not all of Hank and Bobby's outings were so enjoyable. One day, after Hank saved a trapped child using his powers, a mob of jealous humans formed and attacked the two boys, despite their good deed. [X-Men (1st series) #7-8]

Hank was prepared to leave the X-Men after this but, astonishingly, he was interrupted by his own future self. Bobby and the other X-Men were surprised by the arrival of an adult, blue-furred version of Hank McCoy in a flash of light. This Beast claimed Cyclops had killed the professor in the future, and was now joined with Magneto to bring forth a mutant revolution. Iceman and the others were incredulous at this revelation, and agreed to accompany Beast back to the future to see for themselves.

In the days that followed, the original five X-Men were startled to discover how much the world had changed in a few short years. (Bobby, for one, couldn't stop screaming every time he saw his future self.) After confronting future Cyclops and helping save future Beast's life, Jean Grey called for a vote and the originals decided to stay in the future and fix what was wrong with the world before electing to return to the past. [All-New X-Men (1st series) #1-5] 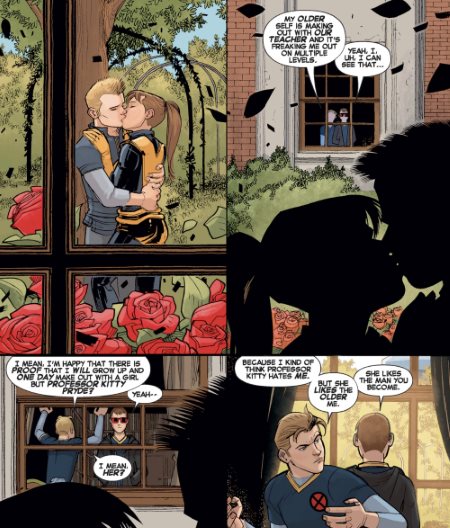 Kitty Pryde was headmistress of the future's Jean Grey School for Higher Learning and became private instructor for the original five as long as they chose to remain in the future. This proved particularly awkward for the young Iceman and "Professor K," who despite dating his future self somehow didn't find the younger Bobby's immaturity remotely charming. [All-New X-Men (1st series) #6-7] Bobby was particularly surprised to find his older self dating Kitty and admitted he just didn't see the attraction at all. [All-New X-Men (1st series) #15]

When young Scott nearly died on a mission, the present day X-Men insisted now was the time to send the original five back home. A group of X-Men from the further future arrived back in time to ensure the O5 did just that, but this group was soon revealed as a future Brotherhood when the real future X-Men arrived as well. Bobby was forced to confront two MORE future versions of 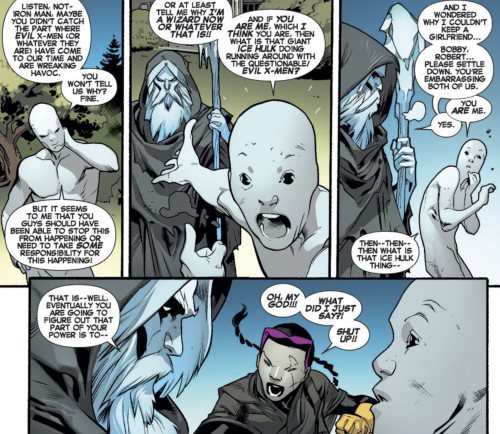 himself in this way: Sir Robert, the wizard-like Icemaster of the X-Men, and the Brotherhood's "Ice Hulk," a near mindless ice construct that nevertheless broke off to exist independently from Sir Robert. As complicated as this became, even more concerning was when the Brotherhood DID try to send the original five home and failed -- the time machine wouldn't let them leave for some reason. [Battle of the Atom crossover]

This adventure damaged the trust Kitty Pryde had in her fellow teachers and so she moved Iceman and the original five to Cyclops' New Xavier School instead, since old Scott had stood by them in the crisis. Kitty and old Bobby had also broken up during this fiasco, a fact for which when young Bobby believed Professor K was blaming him. Kitty told Bobby she was only being harder on him because he simply would not stop talking during instruction! Bobby finally got the message (sorta) and began to quiet down. [All-New X-Men (1st series) #18]

The original five X-Men continued their adventures in the present, facing various threats such as the Purifiers, the Shi'ar Imperial Guard and the return of the Brotherhood from the future. [All-New X-Men (1st series) #19-29] Having been confronted with several older versions of himself which much greater power, Bobby eventually put his training to use and began exploring the limits of his own abilities. While visiting the Ultimate Universe, Iceman learned to create ice avatars to multiply his manpower years earlier than he did in the original timeline. [All-New X-Men (1st series) #31-36] Iceman was also temporarily super-powered by the Black Vortex. Although he chose to give up the full scope of his upgrade, Bobby remained slightly enhanced by the encounter even at the end. [Black Vortex crossover]

With Kitty Pryde staying in space with her new fiancé Star-Lord, Magik became the original five's 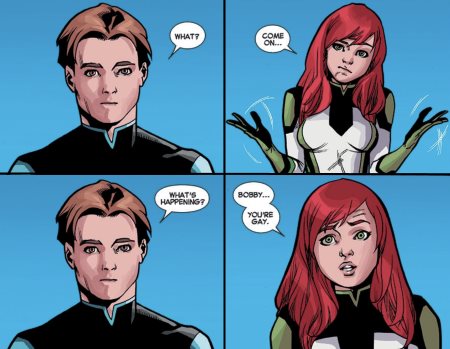 new instructor. When Bobby made a point of loudly "saluting the new professor's unbelievable hotness," Jean Grey finally pulled him aside to talk to him. Being the nosy telepath that she was, Jean had seen inside Bobby's head often enough to know he didn't mean those comments. That he was, in fact... gay. Bobby was startled at being pulled out of the closest in this sudden and highly inappropriate fashion. After some resistance, though, he admitted to Jean and to himself that she was right. [All-New X-Men (1st series) #40]