The X-Men reunited when Cerebro registered a high amount of moving mutant energies near the area of San Francisco. As it turned out, it was a large number of latent mutants responding to a mechanical summons broadcast by Mesmero, who was recruiting an army for Magneto (unbeknownst to him, it was really a robot duplicate of Magneto built by the Machinesmith). Iceman saved one of these entranced subjects from being hit by a car and the shock cleared her 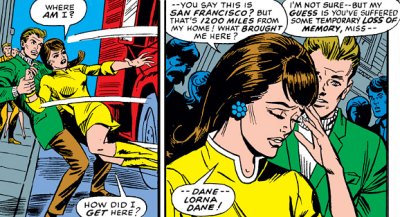 mind. She was Lorna Dane,  who after taking a shower at the X-Men's mansion was revealed to have naturally green hair, that was merely dyed brown.

Shortly afterwards, Lorna was kidnapped by Mesmero’s forces and placed into a mutant energy stimulator, from which she emerged with her magnetic powers fully activated. Lorna was adopted at a young age and was easily convinced that she was Magneto’s daughter. Luckily, Iceman was dubious and uncovered contradictory information detailing how Lorna's real parents had died in a plane crash and she had been raised by her father’s sister and her husband. Comforted by the knowledge that she was not Magneto’s daughter, Lorna broke free of Mesmero’s control. [X-Men (1st series) #49-52] 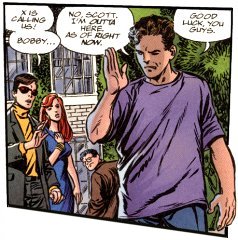 Bobby quickly developed romantic feelings for the green-haired mutant, who initially seemed to return his affections. But when she met Alex Summers aka Havok, she chose to be with him instead. Iceman could not accept this and constantly tried to claim Lorna for himself, causing some bad blood between himself and Alex. Finally, Xavier returned to reveal that he had asked the Changeling to replace him while preparing against an alien invasion. It had been the Changeling, not Xavier, who had died during the battle with Grotesk. After the Z’Nox had been defeated, Iceman angrily quit the team, having enough of Xavier’s mind games, and of seeing Lorna with Alex. 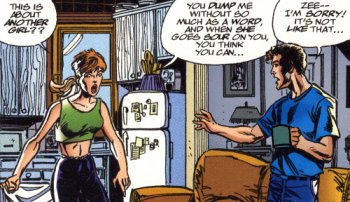 Not knowing where else to turn, Bobby visited Zelda, who was pretty annoyed that, after weeks of not calling her at all, he now showed up to tell her about his problems with another girl! [X-Men: The Hidden Years #1-2]

Upon hearing that his friends were in trouble, though, Bobby took off after them, following a weak mental signal from Professor X towards the Savage Land. Unable to charter a flight through the storms around Tierra del Fuego, Iceman attempted to form an ice tunnel to carry himself the last several hundred miles across the ocean to Antarctica. This proved to be beyond the limits of his powers, and Bobby eventually crashed into the waves, washing up on a beach hours later with no memory of who he was. [X-Men: The Hidden Years #4-6]

By sheer coincidence, he was located by Karl Lykos, who had been hiding out in the jungle since his last venture as Sauron. Lykos tentatively entertained the young Drake, although he was careful not to mention anything that would awaken his old enemy’s memories. That proved impossible once Magneto came across their camp, leading into a battle between the Pterodactyl Man and the Master of Magnetism. Havok and Lorna Dane also chanced upon the battle site, and the sight of so many familiar faces and circumstances was enough to restore Iceman’s memory. After defeating Magneto, Sauron sent the X-Men on their way, hypnotically wiping their memories of the struggle to maintain his anonymity. [X-Men: The Hidden Years #12]

Iceman remained with the X-Men for some time after that, but soon members of the X-Men started vanishing one after another. During a search for his missing teammates, Iceman was kidnapped as well by agents of the Secret Empire, who were assembling all the mutants on Earth for their schemes. Iceman and the X-Men were eventually rescued with the help of Captain America and the Falcon. [Captain America (1st series) #173-175] 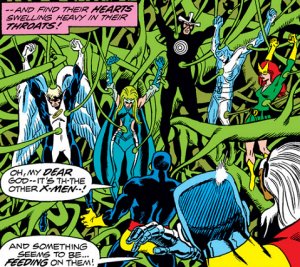 In time, the whole team was captured again, this time by Krakoa, the Living Island. Cyclops was released to bring other mutants to Krakoa. He and Xavier gathered together the second generation of X-Men and this new team succeeded in rescuing Iceman and the original group from Krakoa. Back in Westchester, the two teams attempted to get along, but Iceman more than any of the original X-Men felt threatened by the arrival of the newcomers. He had some harsh words for a few of them, and even struck out against Thunderbird. Soon Iceman and the others chose to leave the X-Men, allowing Professor X and Cyclops to train the new team. [Giant-Sized X-Men #1, Classic X-Men #1]

With the help of Professor Xavier, Bobby secured a scholarship to UCLA after leaving the X-Men. 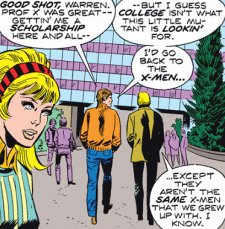 Warren went with him to California and, as the two mutants were pondering their future, the campus came under attack by the Harpies of Olympus. Iceman and Angel soon learned that several mythological misfits were at UCLA attempting to kidnap the gods Venus and Hercules, who were there as a professor and visiting lecturer, respectively. Alongside the Black Widow and Ghost Rider, Bobby and Warren fought through their various foes and soon uncovered a plot by Pluto of the Underworld to neutralize Hercules and Venus before they threatened his plans to overthrow Zeus on Olympus. Together, this motley crew of heroes defeated the Death God’s minions and foiled his plot. [Champions #1-3]

Inspired by these events, Angel suggested the heroes remain together as a new group of crime-fighters in California. Known as the Champions of Los Angeles, they would be open and accessible to the public, acting as “heroes for the common man”. Iceman, Black Widow, Hercules and Ghost Rider agreed to Angel’s proposal, and they established a headquarters and funding in LA thanks to Warren’s recent inheritance. Despite agreeing to help start up the Champions, Bobby actually planned to retire from super-heroing once Warren had the team up and running properly. [Champions #5]

A feat easier said than done – contractors hired to build the Champions’ headquarters and equipment cut costs at every turn, causing their “state-of-the-art” equipment to constantly malfunction and fail. The Champions themselves also had difficulty working together as a group, due to a number of personality conflicts. Still, they successfully battled several foes including Rampage, the Griffin and a team of Russian super-operatives looking to kidnap the Black Widow back to the motherland. One of the Russian agents, Darkstar, turned against her comrades and switched sides to remain in America with the Champions. Darkstar’s defection quickly removed Iceman’s interest in retiring. [Champions #6-11]  Bobby developed a strong crush on the

beautiful blonde expatriate. Unfortunately for Bobby, Darkstar never came to return his feelings for her. When the Champions fell apart a few weeks later, Laynia rejected Bobby’s affections and returned to Russia. Dejected, Iceman quit along with the other members of the always-unstable Champions.

While visiting one of their injured opponents in the hospital, Iceman was exposed to a hypnotic gas by the villainous Stuart Clark, aka Rampage. Clarke used Iceman as a pawn against Angel, making Bobby his enforcer and hostage at the same time by dressing him in the Rampage exoskeleton while Clarke was still too injured to wear it. With the unexpected help of Spider-Man, Angel confronted Iceman in the empty Champions’ headquarters, but Bobby was deeply under 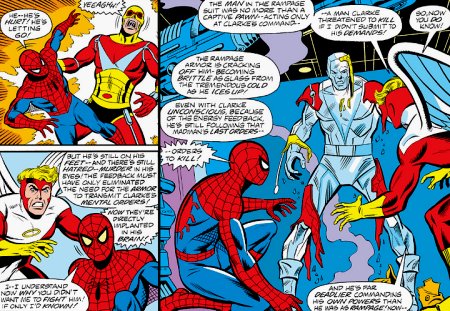 Clarke’s hypnotic control.  Even knocking out Clarke and destroying the Rampage armor didn’t stop Iceman from trying to kill his friends. Eventually, Spider-Man lured him into a scalding hot car wash cycle, and the shock was finally enough to shake off Rampage’s control, restoring Bobby’s true personality. [Peter Parker, The Spectacular Spider-Man #17-18]

Bobby decided to move back east and get serious about his academic career. Before leaving Los Angeles, he met a girl named Terri Sue Bottoms, and they continued to see each other regularly even after moving to New York. [Incredible Hulk Annual #7, Marvel Two-In-One #76] After a few months, though, Bobby dumped Terri Sue for being too fickle. While visiting friends at Dartmouth College, Bobby had some solo action as Iceman foiling a heist of some computer equipment. He also became the star attraction at the college’s annual winter carnival after the kids insisted he stick around, and Bobby finally started to develop some confidence in his abilities as a solo super-hero, outside of the different groups he had worked with. [Bizarre Adventures #27] 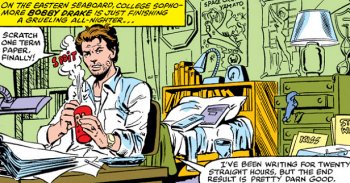 Many months later, Iceman was in college working on his accounting degree when he was telepathically contacted by Professor Xavier for an X-men emergency. Arcade had kidnapped several friends and relatives of the group and, while the main team was forced to follow his insane demand to battle Doctor Doom, Iceman, Havok, Polaris and Banshee snuck into Murderworld to free the hostages. Working side by side with Lorna, Bobby realized that, though he would always have a weak spot for her in his heart, he could finally accept that she loved someone else. [Uncanny X-Men (1st series) #146] He had a similar friendly meeting with Darkstar during the Contest of Champions, showing there were no hard feeling between him and Laynia either. [Marvel Super Hero Contest of Champions #1]