Unfortunately, Iceman didn't have time to explore his sexuality. The mutant race was soon in great peril (again) as clouds of Terrigen Mist floating in the skies of Earth proved toxic to mutantkind. "M-Pox" was the affliction that emerged from Terrigen exposure, leading some mutants to get sick, lose control of their powers, even die. The X-Men were forced to take extreme measures, moving the entire mansion out of this dimension to Limbo, an X-Haven where mutants could hide from the death cloud traveling the Earth. [Extraordinary X-Men #1] 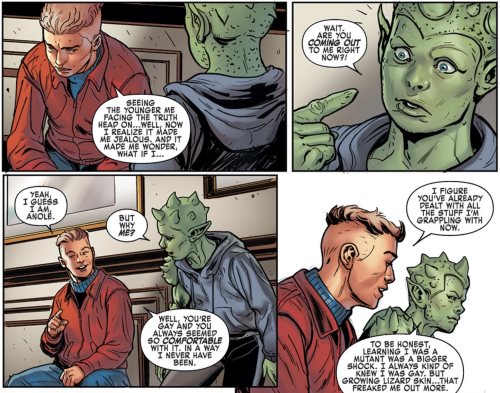 Haven, while monitoring the Terrigen cloud's path for potential threats. As all this was going on, his sexuality was the last thing on Iceman's mind. In fact, he was secretly furious at his younger self and Jean Grey for forcing him out of the closet the way they did. He initially swore to push his feelings down again after their confrontation. Still, he managed to find a quiet moment to speak to Anole, one of the openly gay students at X-Haven. Their conversation was the first time Bobby "came out" of his own volition. [Iceman (3rd series) #11, Extraordinary X-Men #6]

After the threat of the Terrigen Mist was ended, Kitty Pryde assumed command of the X-Men and arranged to move the Xavier Institute to Central Park in order to be open and visible with humankind again. Bobby continued to work with the X-Men as a teacher and reservist for the main team. With the crisis period passed and facing reduced responsibilities, Bobby finally began 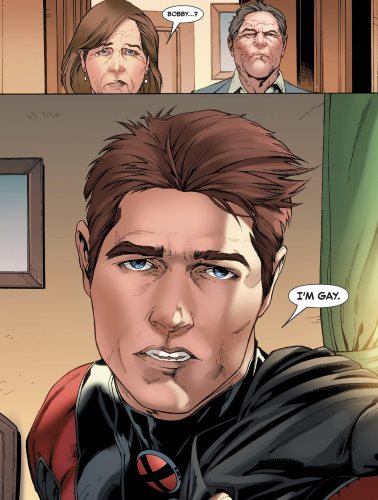 to focus on coming to terms with his sexuality. He signed up for a dating site and began talking to the people in his life about what he was going through. A heart attack scare brought Bobby to reconnect with his parents, and he began preparing for how to break the ice with them. [Iceman (3rd series) #1]

Coming out to his friends and exes was a mixed bag. Northstar was highly supportive, Polaris claimed she must have always known, while Kitty was hurt that she had to hear it first from Goldballs. Bobby intended to come out to his parents at a family dinner, but a Purifiers attack killed the moment. He started planning to write them a letter to lay out his feelings but, when they showed up to visit at the Xavier Institute, he impulsively blurted out he was gay to them. William and Maddie Drake were as ignorant and unsupportive of their son as ever, questioning if he was sure, asking if he had been with a man yet, and worrying about the loss of potential grandchildren. It was a relief, in fact, to go fight Juggernaut rather than listen to them any further. [Iceman (3rd series) #2-5]

After the passing of Black Widow, Iceman and the Champions gathered in Los Angeles to commiserate and pay their respects to their lost comrade. While in LA, Bobby met a man named Judah Keller and they hit it off immediately. When he returned to New York, things got even worse with Bobby's parents. They had found out about young Bobby from the past and wanted the four of them to have dinner. During the meal, however, it was clear the Drakes wanted young Bobby to come back and live with them, so they could try again to raise him as the son they really wanted. As hurtful as it was, Bobby and Bobby supported each other and walked out on their parents. All of this led to Bobby making a decision to leave the X-Men and move to Los Angeles. [Iceman (3rd series) #6-8]

Iceman's decision met with mixed reviews. Many of his friends contributed to a going away party for him and Judah, but Kitty refused to support his decision. She thought he was moving for a guy he had just met and was running away from his issues. At the party, Bobby tried to relax. He received more support from Northstar and even got hit on by Rictor. When Daken and Amp attacked the Institute, however, Judah was stabbed through the chest by Daken. Although he recovered, he decided a relationship with a mutant super-hero was too much for him to handle. With the relationship ending, Iceman, decided to stay in New York City instead of relocating. [Iceman (3rd series) #9-10]

Still, things did turn around for Iceman in New York after that. His parents reached out for Bobby's assistance with Mr. Poklemba, their closeted mutant neighbor having trouble. Bobby and Kitty made peace, and she offered to utilize him better in the X-Men in order to make him feel more involved. Kitty even suggested he lead his own team of X-Men culled from their reserves. [Iceman (3rd series) #11] The opportunity came sooner than either expected when Kitty's alpha 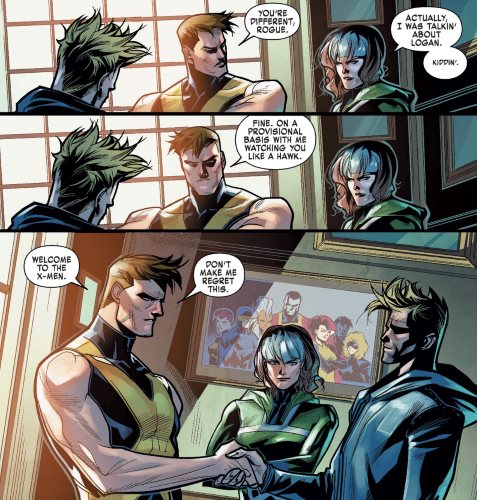 squad were sent to prison thanks to Mesmero. Iceman and Rogue fielded an entirely new interim team with Magik, Ink, Armor and Magma. They also added the new Pyro, Simon Lasker, who had been hypnotized into working for the Brotherhood earlier by Mesmero, and wanted to make good. Rogue encouraged Iceman to extend a helping hand to the former super-villain, just as Xavier did for her. [X-Men: Gold #23-25] It seemed to be a good call, as Bobby and Simon later had a one-night stand the night of Rogue and Gambit's wedding. [X-Men: Gold #32]

Iceman continued training students and working for the X-Men at the Xavier Institute. When Emma Frost asked for his help freeing her brother from their controlling father, Bobby learned why Emma had never outted him in the past, despite spending time in his mind. Emma's brother Christian Frost was gay, and had been sent to conversion therapy by their father Winston before ultimately institutionalizing him. In this one and only instance, Emma was more respectful of people's privacy than Jean Grey. Iceman also opened lines of communication between the X-Men and a new Morlock community, and dealt with an attempt by Mr. Sinister to replicate his ice avatars into an army under his power. [Iceman (4th series) #1-5]

On his birthday, Ice Master of the future X-Men came back in time and confronted Iceman about mistakes he might end up making in the future. Ice Master's attempt to make decisions for Bobby 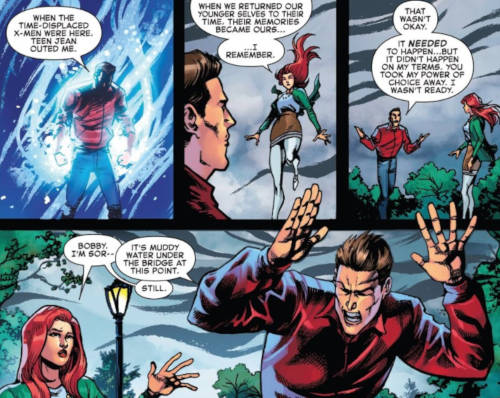 served as an unexpected impetus for a confrontation between Bobby and Jean Grey. It had been months (or years, depending on your perspective) since Jean forced Bobby out of the closest against his wishes. Bobby finally spoke up about his feelings and shamed Jean for taking away his agency on such a serious and personal topic. Still, he felt he was better off being honest with his sexuality now, and forgave Jean because of her good intentions. Seeing this interaction and a heartfelt exchange between Iceman and his father at the birthday party convinced Ice Master his mission into the past was in error. [Uncanny X-Men: Winter's End #1]

Iceman and the X-Men were forced to deal with the rogue actions of Nathaniel Grey, the X-Man, who raised his Horsemen of Salvation to force benevolent changes on human society. This led to a colossal battle where nearly the entire roster of X-Men past assembled to fight against Grey. X-Man was being enhanced by a Celestial Lifeseed and, in a massive eruption of energy, swallowed the X-Men into a new reality of his own making. [Uncanny X-Men (5th series) #1-10] X-Man created a peaceful utopian society for mutants based on abandoning love and personal connections. Expression of these feelings was considered a crime, and Iceman was cast into the role of a fascist enforcer of these rules as part of Department X. When the cracks began to show in X-Man's reality, Bobby and his comrades Northstar, Jubilee and Rictor slowly regained their memories, and were traumatized by what they had done and what they had forgotten. [Age of X-Man: X-Tremists #1-5]

Iceman and the X-Men soon returned to their original reality, and Bobby Drake will presumably remain by the side of his adopted family as the X-Men march into the future. [Uncanny X-Men (5th series) #22]